The Wire Troll: Tristan Thompson Working the Boards for Boston 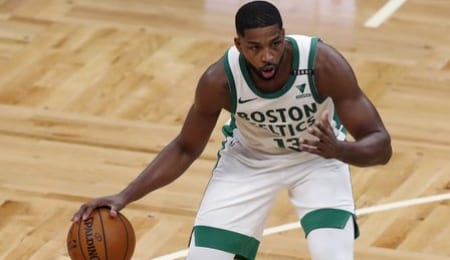 When he isn’t getting raked by the Kardashians, Tristan Thompson is providing decent rebounding numbers. (AP Photo/Michael Dwyer)

Welcome back to another week of Fantasy basketball. We’re into late-February now, nearly 30 per cent of the way through the season, so there’s still tons of time for you to improve your team through the wire. This week, we’ll focus on a couple of players that are ideal for those seeking offensive rebounding help in deep formats.

This week, LeBron James and Kevin Durant were named All-Star Game captains; Anthony Davis will now be out for four weeks; and Bradley Beal played the hero as Washington is starting to roll with three straight wins.

Tristan Thompson, PF/C, Boston Celtics (ESPN: 11 per cent; CBS: 48 per cent): Thompson’s arrival in Boston was supposed to render Daniel Theis useless, but that hasn’t really happened so far. However, Thompson’s recent play suggests he may be taking over, and despite seeing less PT this season, he’s really offering owners help on the offensive rebounding side of things. His minutes are up this month — especially this week, as he’s flirted with double-doubles in each of the last two games. If this trend of Thompson’s minutes rising continues, he’ll be a useful Fantasy asset down the stretch. And clearly, he can still throw it down in practice (see video below). Considering Cleveland was criticized for reaching for him as the No. 4 pick in the 2011 draft, he’s had a pretty solid career as a role player capable of regularly racking up the double-doubles. However, speaking of racks, the Kardashians apparently are not big fans of Thompson.

Robin Lopez, C, Washington Wizards (ESPN: 1.6 per cent; CBS: 8 per cent): Another veteran big whose been helping in rebounding (although not to the same extent as Thompson) is Lopez. We last recommended Lopez two years ago, and that worked out very well as he had a fantastic second half. He fell a point shy of a third straight double-digit scoring game on Wednesday, and although he’s never developed his outside game like big brother Brook, he can still supply some decent scoring efforts that have a bit of value in very deep leagues. And with Thomas Bryant (ACL) done for the season, the centre position is up for grabs in Washington.

One of my personal faves growing up was Quebec prog rockers Harmonium, who began in 1972, but were unfortunately short-lived, breaking up in 1978. In 1974, they released their eponymous debut, with the track “Attends-Moi,” opening up Side Two.

By RotoRob
This entry was posted on Saturday, February 20th, 2021 at 1:11 pm and is filed under BASKETBALL, RotoRob, The Wire Troll. You can follow any responses to this entry through the RSS 2.0 feed. Both comments and pings are currently closed.