The Wire Troll: Boban Marjanovic Blowing Up in Philly 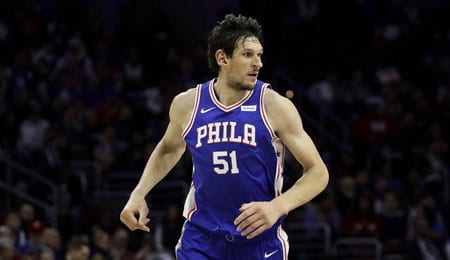 Boban Marjanovic has suddenly become a key player for the Sixers. (NBC Sports)

Welcome back to another week of Fantasy basketball. We’re into late-February and with the All-Star break now in the rear view mirror, it’s time to get super serious about your title aspirations. Work that wire, peeps!

This week, James Harden wasn’t shy in his indictment of referee Scott Foster; the up and coming Kings continued to earn respect from the Warriors; and, after Zion Williamson got hurt wearing Paul George‘s signature shoes, George has asked Nike what went wrong with the sneakers.

Boban Marjanovic, C, Philadelphia 76ers (ESPN: 3.1 per cent; CBS: 18 per cent): With Joel Embiid out, Marjanovic should be a nice pickup for the next week or so. Starting on Thursday, Marjanovic gave a preview of what he can do with a double-double, two assists and a block. The turnovers are problematic, but this dude’s PT is on the rise lately already and only set to spike now that he’s starting. The veteran’s is enjoying his finest rebounding month of the season, although he wasn’t doing a great job on the offensive glass with the Clippers before getting dealt to the Sixers. Since he’s arrived in Philly, Marjanovic is getting more touches, so many finally be back on the Fantasy radar for the first time in over two years since we last recommended him. He’s especially useful in matchups where he won’t be forced outside the paint as the Serbian is not exactly fleet of foot. Marjanovic has some tools; he just needs to apply them in games more consistently. Perhaps this week will give him that opportunity. Hey, if nothing else, he’s one tough mofo — in the real or virtual world (see video below).

Maurice Harkless, SF, Portland Trail Blazers (ESPN: 0.8 per cent; CBS: 4 per cent): Harkless has been taking advantage of Evan Turner‘s absence with a nice jump in PT on Thursday resulting in a near double-double. Harkless’s touches are up lately, and although his minutes have dipped the last couple of months, he’s worth a look now. He showed promise two seasons ago, but his offense has slipped since. Still, he shows flashes like this thunderous dunk from time to time that make you wonder if he’ll live up to being the 15th overall pick in 2012.

Cody Zeller, C, Charlotte Hornets (ESPN: 26.2 per cent; CBS: 37 per cent): Zeller’s on a nice little roll. flirting with a double-double in each of the last six games, while reaching double-digit points in four straight. His bucket count’s up the last couple of weeks after a slow start to the month and his overall PT has risen this season, giving him the chance to become a Fantasy factor again. In fact, this is his best rebounding season yet. Since he returned from an injury two and a half weeks ago, Zeller has really turned it on, so needs to be owned in smaller formats and given strong consideration in standard-sized leagues.

Robin Lopez, C, Chicago Bulls (ESPN: 5.9 per cent; CBS: 16 per cent): Another veteran big that’s turned it on lately is Lopez, who managed his sixth straight double-digit scoring game on Friday. He’s getting to the line more in the last two weeks plus and has really done good work at the line this month. Lopez has shown an ability to clean up the glass and has been a real steady presence for a rebuilding Bulls’ squad. Not bad for a dude that didn’t play enough to make any Fantasy noise until February.

Cheick Diallo, PF, New Orleans Pelicans (ESPN: 0.7 per cent; CBS: 7 per cent): On Friday, Diallo got his chance to show what he can do with Anthony Davis getting limited PT, and it was an impressive: a team-high 16 points, 18 boards, one assist and one block in 26 minutes. Diallo is doing better work from the line lately, and as the Pelicans try to figure out who can fill out their frontcourt, this kid has really improved his stock with this showing.

Don’t you just love those groovy record collections? In 2006, Compact Disc Club released All About Funk, a four CD-collection of the dirtiest funk sounds around. From CD4, came “Voodoo Village,” a 1970 track by Tony Joe White. Louisiana swamp rock singer-songwriter White was just lost to the music world in late-October, but for 40 years his guitar wailed with funk and blues tunes. This song was penned by his wife, Leanne.

By RotoRob
This entry was posted on Saturday, February 23rd, 2019 at 7:17 pm and is filed under BASKETBALL, RotoRob, The Wire Troll. You can follow any responses to this entry through the RSS 2.0 feed. You can skip to the end and leave a response. Pinging is currently not allowed.