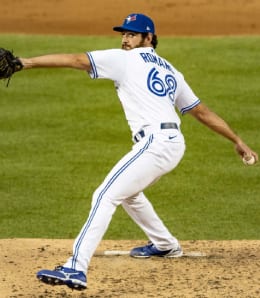 Welcome back to another week of Fantasy baseball. We’re just about to wrap up August, and while this strange season seems to remain young, we are in fact into the second half now. Keep mining the wire!

This week, Mets’ General Manager Brodie Van Wagenen was caught on camera criticizing the MLB Commissioner for a plan that wasn’t even his; The Players Alliance has pledged donation of salaries to help fight social injustice; and the Jays have landed former pitching prospect Taijuan Walker from Seattle for the ever loved PTBNL or cash (see more on Walker below).

Jordan Romano, RP, Toronto Blue Jays (ESPN: 33.7 per cent; CBS: 36 per cent): Until recently, Romano has really been off the Fantasy radar which is no surprise after he was shelled in his MLB debut last year. Yet somehow he’s become among the more pleasant surprises among relief pitchers this season, and if the Jays weren’t so hot, he’d likely be an intriguing trade option. Romano’s hurled four straight outings without surrendering an earned run, recently shifting from setup to closing duties for the Jays. He’s managed to up his K rate to 12.9/9 this year while improving his control and becoming much less hittable. No, Romano’s current ERA is not sustainable, but it’s not as if his 2.30 FIP is bad. The Toronto-area native (who seems very patient signing autographs — see video below), a 10th round pick way back in 2014, has emerged as a valuable piece in the Jays’ bullpen and definitely deserves grabbing in all formats. [UPDATE: Note that Romano left the game Friday with a finger injury, so check his status before making an investment.]

Anthony Misiewicz, RP, Seattle Mariners (ESPN: unowned; CBS: unowned): Misiewicz is another hurler that has escaped Fantasy owners’ attention so far, but this southpaw rookie has been downright nasty against left-handed hitters (.429 OPS against). He’s proved versatile, pitching very short outings and often going multiple innings, while throwing on a seemingly daily basis. Misiewicz intrigues us with his strikeouts and holds, and if he can induce groundballs as a similar rate to what he did in the minors, he could be a very useful AL-only league asset.

Jason Heyward, OF, Chicago Cubs (ESPN: 8.8 per cent; CBS: 14 per cent): During the Covid-19 pause, we discussed Heyward in depth, concluding he was worth a late-round flier to see if his power resurgence from last year would continue. Well, he’s pretty much been a fixture in right field for the Cubs this year, and — believe it or not — his current OPS of 830 represents his best showing since he was a rookie. Heyward is no longer a feared slugger, but he definitely is worth owning in NL-only leagues and perhaps some deeper mixed leagues.

Johan Oviedo, SP, St. Louis Cardinals (ESPN: 4.2 per cent; CBS: 4 per cent): A 22-year-old Cuban righty, Oviedo is one of several Cardinal hurlers to make their MLB debuts in recent weeks. In two starts, he’s definitely held his own, giving up just six hits and four runs over 10 innings. More punchouts would be nice, and given the 10.2 K/9 he enjoyed at Double-A last year, Oviedo is capable of delivering.

Cole Tucker, SS/OF, Pittsburgh Pirates (ESPN: 0.8 per cent; CBS: 2 per cent): Pittsburgh’s first rounder in 2014, Tucker didn’t exactly light the world on fire as a rookie last year, although he did flash more extra-base sock than expected. This year, that pop has waned, but he’s shown improvements in other areas, and has been racking up some decent run numbers. Cole has transitioned from shortstop to the outfield this year, and he’ll now take over the everyday gig in centre with Jarrod Dyson getting traded to the ChiSox. It’s a small sample size, but given the increased launch angle Cole has shown this year, he could experience a nice power bump soon. Grab him in NL-only leagues and see how he fares.

Wade Miley, SP, Cincinnati Reds (ESPN: 2 per cent; CBS: 11 per cent): It’s been over three years since we last recommended Miley, but after a rough start, he’s looked much better in his last couple of outings, highlighted by four shutout innings of one-hit ball on Thursday. It feels like Miley’s been a tad unlucky given all the infield hits he’s given up and his xFIP (4.91) suggests as much. He could be a decent streaming option in NL-only leagues.

Daniel Norris, SP/RP, Detroit Tigers (ESPN: 1.1 per cent; CBS: 2 per cent): Norris is inducing groundballs at a higher rate than ever, and he’s really excelling in his current role, although his value is limited to deep AL-only leagues.

Tony Gonsolin, SP, Los Angeles Dodgers (ESPN: 19.8 per cent; CBS: 29 per cent): Gonsolin’s line drive has risen this year, but his SIERA (3.95) tells the story of an effective starter.

Santiago Espinal, SS, Toronto Blue Jays (ESPN: 0.1 per cent; CBS: unowned): The rookie has been starting while Bo Bichette is out (and it sounds like Bichette will be out quite a while longer), and he’s starting to produce, with back-to-back multi-hit efforts.

Royce Lewis, SS, Minnesota Twins (ESPN: 2.4 per cent; CBS: unowned): Despite talk that he’ll ultimately move to the outfield, Lewis remains a shortstop, one capable of making his MLB debut this season. Either way, he’s a superb dynasty option.

Taijuan Walker, SP, Toronto Blue Jays (ESPN: 34.6 per cent; CBS: 50 per cent): Walker’s velocity has regressed slightly every season, but he’s compensated for it this year by throwing his slider more than ever and introducing a split-finger pitch. If the new Blue Jay can gain a smidge more consistency start to start, he’s a break out candidate.

Few composers’ music is performed as much as that of Ludwig van Beethoven. His Symphony No. 3 in E Flat Major (known in Italian as “Sinfonia Eroica”) is a four-movement piece. Here’s the first movement.

By RotoRob
This entry was posted on Saturday, August 29th, 2020 at 12:50 pm and is filed under BASEBALL, RotoRob, The Wire Troll. You can follow any responses to this entry through the RSS 2.0 feed. You can skip to the end and leave a response. Pinging is currently not allowed.