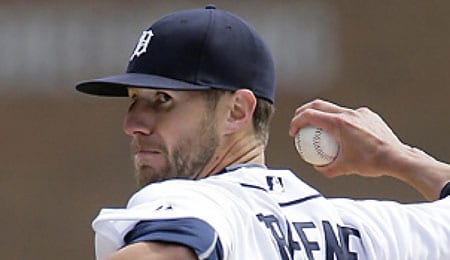 Welcome back to another week of Fantasy baseball. We’ve arrived into August, and the true “dog days” of the MLB season. So keep working that wire as you try to scratch and crawl your way to a title.

This week, the no longer durable Felix Hernandez is back on the DL, this time with biceps tendinitis; Oakland’s Matt Joyce got into it with a fan, apparently yelling an anti-gay slur at him; And Brandon Belt got beaned by a curveball and is dealing with concussion symptoms.

Shane Greene, RP, Detroit Tigers (ESPN: 29.8 per cent; CBS: 45 per cent): Last year, we recommended Greene when he was shifted to the bullpen, and that’s seems like a good call now that he’s ascended to the closer gig in Detroit with both K-Rod and Justin Wilson gone. Greene has hurled five straight hitless outings and hasn’t been scored on since ending a rough June. With 9.6 Ks/9, he clearly has the stuff to dominate and is obviously having fun (see video below).

Tim Beckham, SS, Baltimore Orioles (ESPN: 14.2 per cent; CBS: 29 per cent): Apparently, a change of scenery after nine years in the Rays’ system was all Beckham needed to remind us why he went first overall in the 2008 draft. Since landing in B-More, he’s racked up four straight multi-hit games, including a four-hit bonanza Friday, making him the only active player to put up multiple hits in each of his first four games with his current team. Beckham is finally a productive big leaguer, so grab him now. Perhaps he’s just a late bloomer (remember, he’s still just 27).

Drew Butera, C, Kansas City Royals (ESPN: 0.1 per cent; CBS: unowned): With Salvador Perez (oblique) set to hit the DL, Butera takes over as the starting catcher in KC. Butera hasn’t accumulated much in the way of counting cat numbers this year, but if you’re desperate for short-term help in an deep AL-only league, give him a shot.

Tyler Skaggs, SP, Los Angeles Angels (ESPN: 9.1 per cent; CBS: 25 per cent): On Saturday, Skaggs (oblique) finally returned to the majors again for the first time since April 29. While the rust showed in this start, he was off to a real nice start before getting hurt, potentially putting together a breakout season, so could be a very sneaky add if you need pitching help down the stretch.

Doug Fister, SP, Boston Red Sox (ESPN: 7.1 per cent; CBS: 10 per cent): After shutting down the Indians on Monday, Fister seems to have cemented himself in the Red Sox rotation. Since joining Boston, he’s spent most of his time starting, and while his career-worst ERA doesn’t exactly entice us, August does tend to be one of his best months traditionally, so feel free to take a flier here.

Seth Lugo, SP, New York Mets (ESPN: 14.2 per cent; CBS: 38 per cent): Lugo keeps logging decent innings, lasting at least five frames in all 10 starts this season, just missing out on his fourth quality start in five tries on Friday. In shallow formats in which you need pitching help, consider him. No, he hasn’t been nearly as magical as last year, but he’s getting the job done.

Manuel Margot, OF, San Diego Padres (ESPN: 30.8 per cent; CBS: 46 per cent): The counting cat numbers are starting to add up for Margot, but we’d still like to see him improve his contact rates. Still, quietly, he’s put together a nice package of power, speed and average.

Jeimer Candelario, 3B, Detroit Tigers (ESPN: 0.4 per cent; CBS: 5 per cent): Candelario, recently acquired by Detroit from the Cubs, is expected to be promoted to the majors on Monday with Jose Iglesias (bereavement) currently away. Candelario was seeing a ton of action at Triple-A and had earned his MLB debut earlier this season with the Cubs. So far, he hasn’t been hitting as well in the Tiger organization, but his hit tool should clear the way for a fine career in time. Dynasty league owners need to own this dude.

Jose Siri, OF, Cincinnati Reds (ESPN: unowned; CBS: 1 per cent): Siri just put together a 39-game hit streak to set a new Midwest League record. This Dominican looks like he’s ready for the next level, considering the extra-base pop he’s flashed at Class-A. Oh, and how about his 30 swipes as well? Siri has also improved his walk rate this season and we’re starting to get very interested in what he can do at higher levels, so suggest you add him to your dynasty league.

Wade Miley, SP, Baltimore Orioles (ESPN: 6.1 per cent; CBS: 13 per cent): After a rough patch, Miley has looked better, averaging a K per frame over this last two starts. The line-drive rate is too high, but he looks poised for a better finish.

Cesar Hernandez, 2B, Philadelphia Phillies (ESPN: 36.7 per cent; CBS: 48 per cent): Hernandez (oblique) has come off the DL and resumed his role as the Phillies’ leadoff man. Needs runs? Grab him!

Christian Vazquez, C, Boston Red Sox (ESPN: 9.8 per cent; CBS: 16 per cent): With Sandy Leon (knee) out, the BoSox have been riding Vazquez, and he’s been raking, scoring plenty of runs in the potent Boston lineup.

Dansby Swanson, SS, Atlanta Braves (ESPN: 12.1 per cent; CBS: 34 per cent): Don’t you dare give up on the recently demoted Swanson. He delivered a hit and run on Saturday, then bashed a two-run homer on Sunday at Triple-A. Swanson can hit, and the dude that put up a .302 BA over 129 at-bats with the Braves last year will re-emerge in time. This may be your last chance to grab him off the wire.

By RotoRob
Tags: Shane Greene
This entry was posted on Sunday, August 6th, 2017 at 10:45 pm and is filed under BASEBALL, RotoRob, The Wire Troll. You can follow any responses to this entry through the RSS 2.0 feed. Both comments and pings are currently closed.