Can Jason Heyward Return to Stardom? 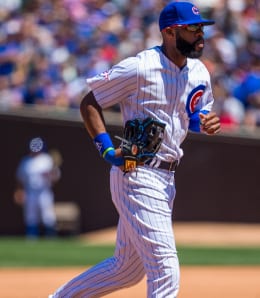 Jason Heyward is still trying to prove he was worth the money. (Julie Fennell)

While pouring over Baseball Reference in search of story ideas, we found ourselves looking at Chase Headley, who pretty much disappeared from baseball after being released by the Padres in May 2018. In looking at his similarity scores, something really jumped out at us: the second most similar batter to Headley? None other than Cubs outfielder Jason Heyward.

This very much surprised us, because they seem like such different players.

Then again, both were once budding stars that turned into meh players and bounced around a bit as they neared the end of the careers. We’re of course assuming Headley is done; in Heyward’s case, his story has yet to be completed.

But we can sum up Heyward’s career with the Cubs very succinctly: in the four years since he signed that massive contract for Chicago, he’s put up a cumulative WAR of 7.5 — exactly one more than he managed in 2015, his first and only season in St. Louis.

Just think about that for a moment.

Over his career, he’s flashed all those skills, but has never really been able to put them all together for that one big season that many expected for so long. But hey, at least he looks productive in the virtual world (see video below).

Heyward’s really been difficult to project throughout his career. As a rookie in 2010, he had career highs in walks and OPS. The following year he dealt with injuries and was miserable, but in 2012, he enjoyed personal bests in games, at-bats, runs, triples, homers, RBI and (unfortunately) strikeouts.

In 2013, Heyward was hurt again, and once again was awful. Despite a power outage, he mostly bounced back in 2014 and then enjoyed career bests in hits, doubles, steals and BA in 2015.

And then came the ill-fated contract with the Cubs.

In his debut season with Chicago in 2016, Heyward was so bad that he wound up losing some PT. His .230 BA was nearly a career worst and his slugging was never weaker. The following season, his counting cat numbers took a dive thanks to a couple of DL stints, but at least his OPS returned to over 700.

In 2018, Heyward again dealt with the injury bug, including a concussion in May, however he did manage slightly more at-bats and improved his contact rate en route to his highest BA since 2015.

Last year, he continued to trend in the right direction as the doubles turned into homers, helping him top 20 bombs for just the second time (which is really hard to fathom). Even so, his platoon splits (.205 BA, .295 SLG vs. lefties, compared to .264 and .466 against righties) suggest that he could be headed for a job share in the not too distant future, despite his fielding prowess.

No longer a major asset in the speed department, at this stage Heyward is worth a late-round pick as a depth option, if for no other reason than to see if the nice spike last season in his barrel percentage sticks — along with the power.

Canadian rock band Lighthouse launched in 1968, and notwithstanding a few breaks here and there, is still going today. In 1973, the band released Can You Feel It, and here’s the title track, penned by Lighthouse’s main songwriter, Skip Prokop, who passed away almost three years ago.

Now it’s your turn. Let us know in the comments below what you expect out of Heyward in 2020 and going forward.

By RotoRob
Tags: Jason Heyward
This entry was posted on Friday, May 22nd, 2020 at 8:24 pm and is filed under BASEBALL, Player profile, RotoRob, Scouting Report. You can follow any responses to this entry through the RSS 2.0 feed. Both comments and pings are currently closed.