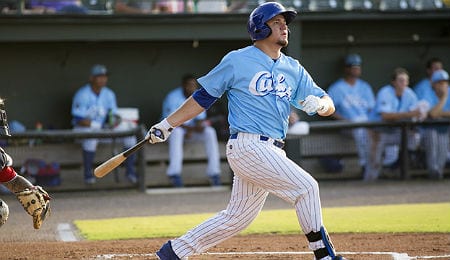 The Cubs surprised many by taking Kyle Schwarber so early. (Cubsinsider.com)

Our recap of the 2014 MLB Draft rolls on with an analysis of how the National League Central teams did this past June.

The Skinny: Schwarber was not expected to go in the top 10, let alone the top five, but the Cubs loved what they saw from the burly backstop in leading IU to its first-ever College World Series. He is a legitimate power threat from the left side (see video below), but ultimately there are still questions as to whether he remains behind the plate long-term. In fact, after catching in the low minors, Schwarber was playing left field exclusively by the time he got to High-A Daytona. Stinnett has improved since being taken in the late rounds by the Pirates last year, as the 6’4” righty has a power arm but may be more suited to be a reliever at this point because of mechanical concerns. Sands, on the other hand, is much more consistent at repeating his delivery and can reach the mid-90s with his fastball. He also features a very good 12-to-6 curve.

Bottom Line: The Cubs are certainly headed in the right direction with what has become a stocked farm system, and there is some great potential in this year’s class. Schwarber still has a lot of development left, but he and Stinnett will be two more big cogs in the Cubs’ growing young talent pool.

The Skinny: The Reds’ first four picks were all college players. Howard could be used either as a starter or a reliever down the road after taking over the closer’s role this season at UVa. Blandino, a junior like Howard, had a great Cape Cod League showing. Don’t expect the next Barry Larkin, but Blandino brings a quick bat and solid plate discipline. Taylor Sparks sounds like the next American Idol champ, but at 6’4”, 210 pounds, he’s a big bat who could find his way to Great American Ballpark sooner rather than later.

Bottom Line: The Reds did not pick up any total studs, but going with more polished players was a sound move to help restore the system fairly quickly. Howard needs to find a role that best suits him and Blandino and Sparks aren’t there yet, but this class could develop into a good one in a few years.

The Skinny: The Brewers wanted pitching, and they went overboard, taking 27 of them with their 41 picks. Medeiros went higher than expected but has great stuff, including a mid-90s fastball and darting slider. He is somewhat undersized (6’2”, 180 pounds) but has great upside. Gatewood, on the other hand, is a big body (6’5”, 190) with some great power potential that was on display when he won the junior portion of the Home Run Derby in July. Harrison is a tremendous athlete (his football future might be as bright as his baseball future), but if he sticks to the diamond, his rocket arm and strong bat make him an intriguing prospect.

Bottom Line: You can’t fault the Brewers for loading up on arms, nor for being so enamoured with Medeiros. Still, they reached a bit on a number of their picks, so don’t be surprised if this class is full of late-bloomers.

The Skinny: Imagine: the Pirates took another Cole in the first round. This is Cole Tucker, a speedy, switch-hitting shortstop. He is a bit raw but has the tools to be an outstanding shortstop in the future. Connor is no Average Joe either, giving the Bucs a chance to be flexible with him because he may project as a catcher. Four years ago, Keller was Iowa’s top pitching prospect and was drafted by the Orioles in the 22nd round last year. He has an improving fastball, but has a ways to go to be a polished product. Gushue, also a switch-hitter, missed out on being drafted when he graduated high school early to go to Florida, but has harnessed his abilities over his time in Gainesville and brings some above-average pop to the table.

Bottom Line: The Pirates had a couple of compensatory picks — they also grabbed Texas high-school pitcher Trey Supak in the CB B slot — and did a nice job adding depth to multiple areas by only using a little over half of their picks on pitchers.

The Skinny: St. Louis used its first six selections on pitchers despite taking only 23 arms out of 42 picks. The Cards ended up with four picks in the first two rounds, as they also grabbed righties Ronnie Williams and Andrew Morales. Weaver is somewhat undersized at 6’2”, 170 pounds, but has a mid-90s fastball and just needs to develop his breaking ball. Flaherty has the ability to play third base at a high level, so it will be interesting to see where he ends up down the road. Seferina ended up being the first position player the Cards took, an exciting but raw speedster who stole 34 bases last season in his freshman year.

Bottom Line: Given the Cardinals’ penchant for developing their young talent, they could be in excellent shape in the near future, even if they may have reached on a few picks. They gave themselves plenty of pitching options for the future, and grabbed some hard-nosed position players along the way in Serefina and shortstop Andrew Sohn (sixth round).

Now it’s your turn. Let us know in the comments below how you think your favourite NL Central did in the draft.

Crave more in-depth Fantasy analysis? Then join us every Thursday at 9 p.m. EST for RotoRob Fantasy Baseball Weekly Podcast on Blogtalkradio as we entertain and edify you for an hour or more each week. RotoRob’s guest next week will be RotoRob.com NHL Editor Chris Wassel. Tune in here.

By Michael Seff
Tags: 2014 MLB Draft, Chicago Cubs
This entry was posted on Saturday, September 13th, 2014 at 3:50 pm and is filed under BASEBALL, Draft report, Michael Seff, Prospects. You can follow any responses to this entry through the RSS 2.0 feed. Both comments and pings are currently closed.