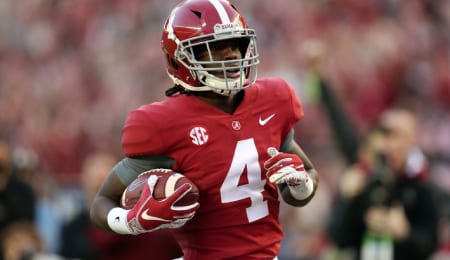 Jerry Jeudy is the near the top of a packed WR draft class. (The Draft Wire)

We hope you all had a happy Easter, even if the celebration was likely a tad muted this year. Before long, it will be time to make some NFL picks, but for now, we’ll continue to focus on the upcoming draft. So let’s continue our 2020 NFL Draft Preview by looking at our No. 13 and 14 top prospects. . Previous parts of the series can be found here:

Scouting Report: Jeudy comes from a line of elite wide receivers out of Alabama including Julio Jones, Amari Cooper and Calvin Ridley. In his sophomore year in 2018, Jeudy received the Biletnikoff Award after earning consensus first-team All-American honours. He finished the year with 68 receptions for 1,315 yards and 14 touchdowns. In 2019, Jeudy continued to excel, going off for 1,163 yards on 77 receptions and 10 touchdowns in just 13 games.

The soft-handed Jeudy mixes tight, smooth route running with blazing top-end speed. With fluid hips, decent agility, and soft hands, he can provide coverage relief in any area of the field. Jeudy has a great feel for leverage and coverage, and has innate understanding of space creation. He stems defenders a lot better than his peers coming into the NFL. Offering unique boundary control (not unlike Lynn Swann), Jeudy is a great blend of deep ball and sideline control.

San Francisco has all the pieces to make another run to the Super Bowl. There are two positions we believe the 49ers will consider: QB or WR. Jimmy Garoppolo is a good quarterback for Head Coach Kyle Shanahan’s system and is currently in the third of a five year contact. Bringing in Jordan Love or Justin Herbert will hedge future quarterback dilemmas and create internal competition. But with Emmanuel Sanders gone and Deebo Samuels poised to take over as the X receiver, Jeudy is a great fit as an ancillary Y receiver. If Jeudy manages to draw coverage away, that in itself is a success.

Dallas, which picks 17th, seems interested (see video below), but we have our doubts whether he will still be on the board at that time.

Scouting Report: Kinlaw started his collegiate career at Jones County Junior College in 2016, earning second-team Junior College All-American honours after tallying 26 tackles (8.5 for a loss) and four sacks in nine games. After arriving in South Carolina, he shed 40 pounds so he could contribute in all 13 games as a sophomore for the Gamecocks. In 2018, Kinlaw started 12 games and was awarded the team’s defensive MVP award after posting 38 tackles (10 for a loss), 4.5 sacks and five passes defended. As a senior, he earned first-team Associate Press All-American and first-team All SEC honours after racking up 35 tackles and six sacks in 12 starts.

A mammoth individual with many elite physical traits, Kinslaw has always relied on his size, length and power to overwhelm opponents, but that won’t fly in the NFL. Perhaps the purest bull rusher in this class, his impact often requires two blockers to keep the QB upright. Kinslaw has great hip mobility for someone his size and incredibly violent hands. At his worst, he’s an A gap run stopper.

The talented defender has many flaws, most of which can be coached out. First, Kinslaw will be wildly inconsistent in the pros. Poor pad level and an inability to convert his energy coming off the snap leads to balance issues. Pro level lineman will not give a DT the split second to recover, so body control should be preached to him. Secondly, he needs to stay low. Kinslaw is effectively standing upright, making it very easy for lineman to get their hands under his armpit. Balance and leverage issues are indications of what is expected during pass rush sets. And finally, he has gotten away with being the biggest and meanest guy on the field. How will Kinslaw react whenever he gets his ass beaten in the NFL? His intangibles should be scrutinized.

Last year, Tampa Bay dumped Gerald McCoy for fellow draft class DT Ndamukong Suh, but Suh’s one year mercenary contract has ended. Similar to Daron Payne, Kinslaw’s job will be to eat up the A gaps in Tampa. Kinslaw won’t be asked to tunnel on the quarterback but rather disrupt the line using his mass. Tampa is a great landing spot for him as the DT tutelage will be ideal for the underdeveloped rookie. Once Kinslaw is pro ready, Head Coach Bruce Arians can consider switching his scheme to 3-4.

American new wave band Devo got its start in 1973, and other than a five-year gap in the ’90s, has been together since. In 1980, “Whip It” reached No. 14 on the Billboard chart and vaulted the band into the spotlight.

Now it’s your turn. How do you see this section of the 2020 NFL Draft playing out?

By Lucas Chan
Tags: 2020 NFL Draft Preview
This entry was posted on Saturday, April 18th, 2020 at 11:25 am and is filed under 2020 NFL Draft Kit, FOOTBALL, Lucas Chan, NFL Draft, Prospects, Scouting Report. You can follow any responses to this entry through the RSS 2.0 feed. Both comments and pings are currently closed.