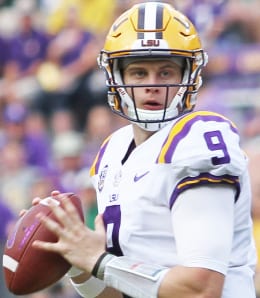 Scouting Report: The LSU product was college’s most efficient passer, leading the country in passing yards passing yards (5,671), total offense (6,039 yards) and completion percentage (76.3 per cent) while setting an NCAA record with 60 touchdown passes in 15 starts. With intuitive coverage understanding both pre- and post-snap and poise under pressure, Burrow demonstrates NFL level qualities in timing and patience. In his final year in the SEC, he maintained a 10.8 yards per attempt average and put up a 60:6 TD to INT ratio.

A pro-style theme (like a run-pass option offense) will be necessary for Burrow as he lacks an explosive release and hip fluidity. He’s slow to scramble, running 115 times for 368 yards (3.2 YPC) with five TDs in 2019. The weak side blitz will be Burrow’s Achilles’ heel.

Despite rumours that Miami may make a play for the top draft pick, after Andy Dalton‘s unceremonious departure Cincinnati is inevitably going to draft Burrow (see video below) to pair with Joe Mixon, A.J. Green and a good but young offensive line. The talent was and is always there for the Bengals, but development of young stars and — more importantly — installing the right scheme and culture has not.

The first-team Associated Press All-American Ohio State product led the nation with 16.5 sacks and six forced fumbles in 12 starts while winning the Maxwell Award finalist as a rare nod in recognition of a defensive player. Playing 34 games over three years, Young tallied 98 total tackles, 30.5 sacks, eight pass deflects and nine forced fumbles. Possessing an explosive first step, great vision and balance around the bend plus great adaptability in techniques, he’s this year’s highest graded prospect. Young has the potential to get to the QB in less than three seconds on every single play and take away longer developing concepts like Dagger, Mills and Yankee, etc.

He has very little downside as a draft prospect. If there were a criticism, Young has a tendency to tunnel on a single technique that proved effective.

Washington has a habit of negatively surprising us all on draft day but we can’t imagine vanilla team owner Dan Schneider passing up the safest and best product this year. The defensive side of the ball is stacked to the brim with blue-chip products like NT Daron Payne, SLB Montez Sweat and SS Landon Collins mixed with great undervalued players like DE Matt Ioannidis and DE Jonathan Allen.

The Redskins’ defensive seven, at its worst, is a run stopping machine. The A and B gaps look virtually impenetrable and opposing teams will need to get to the edge even faster than last year.

Okudah is next in a long and prestigious line of Buckeye cornerbacks taken in the first round the NFL Draft (including Denzel Ward, Marshon Lattimore and Gareon Conley in the last three years alone). Starting all 14 games in 2019, Okudah was awarded first-team Associated Press All-American, first-team All-Big Ten, and Jim Thorpe Award finalist honours. He finished with 34 tackles (one for loss), three interceptions, nine passes defendeds and one forced fumble. Over three years at Ohio State, Okudah tallied 83 tackles (one for loss), three interceptions, 18 passes defended and one forced fumble.

He’s a great student of the game with elite physical traits and mental dexterity, possessing size, length, quickness and speed to press and stick to receivers. Good at zone coverage, Okudah’s insane closing burst is effective at eliminating yards after the catch. He’s a rangy defensive back with great job focus and a coachable mentality.

Okudah must be pointed out for his lack of interceptions, or rather his ball-doving mentality. He must play with better eyes, whether on the thrower or on the receiver. He has below average instincts and needs to be coached and disciplined as teams cannot allow him to be his own island. Okudah needs to stop with the rangy long steps and learn how to take small steps in back pedal, and get his feet under him in press coverage.

Detroit is a dumpster fire. All the moves made in the offseason suggest this is a full coaching rebuild. Pro Bowler Darius Slay is gone as is Damon “Snax” Harrison, replaced by perennially injured A’Shawn Robinson, DE Trey Flowers and CB Justin Coleman. The leaky defense will allow the CBs to play very hawkish, a play style Okudah is allergic to.

However, Becton lacks pro level technique to anchor his body efficiently. Concerns about his ability to play in the pass game is not unfounded. Becton’s natural quickness allows him to recover quickly from pass rush but that won’t fly in the NFL. He needs to be coached and moved around the line until his technique is good enough to handle elite rushers.

The New York Giants are one year removed from the cult worshipping Eli Manning, and Becton is coming onto a team with several veteran offensive linemen in Nate Solder and Kevin Zeitler, a young QB in Daniel Jones and a superstar in Saquon Barkley. Not a bad landing spot for a rookie that needs a brush up on pro level techniques. Management and ownership is another story…

As Josh Norris wrote on Rotoworld: Dave Gettleman has his own term for this: hogmollies. Becton absolutely fits, with his effortless 1.77 10-yard split and 5.10 40-time at 364 pounds. In his previous stop, Gettleman constantly referred to “tackle feet,” players with the athleticism and size to hold up on an island.”

The Sophomore Clemson product led the Tigers in tackles in their national championship season (89 total tackles, one interception returned for a touchdown, seven passes defended and three forced fumbles). Simmons started 14 of 15 games at linebacker just one year after playing in 14 games as a backup safety (45 tackles, three for loss and one sack). His 102 tackles, eight sacks, three interceptions and nine passes defended during the Tigers’ national title season earned him the Butkus Award as the nation’s top linebacker. A Jack-of-all-trades, Simmons has experience working in the slot, as a safety, and as a linebacker as a blitz and as a cover guy.

Concerns with his ability to diagnose a play and react to quick sequencing plays (like the run-pass options) will carry over to the pro level. Simmons is not an elite run blocker and has troubles with angles and timing as a defensive lynchpin. Moreover, he is most likely to be penalized for pass interference when covering a TE. The Los Angeles Chargers are a very dynamic fit for Simmons. With Derwin James, Pro Bowler DB Chris Harris and Casey Heyward in the back, and Linval Joseph, Joey Bosa and Melvin Ingram in the front seven, it seems for years the Chargers have been searching for their perfect linebacker. Here he is.

English musician George Harrison was known as the “quiet Beatle.” But his music sure did the talking. In 1975, Harrison released his sixth studio album, Extra Texture (Read All About it), and the first single on the album was “You.” Here’s the B-side, “World of Stone.”

Now it’s your turn. What do you think of our top five? Should someone be lower, or higher, or is anyone missing? Let us know in the comments below.

By Lucas Chan
Tags: 2020 NFL Draft Preview
This entry was posted on Thursday, March 26th, 2020 at 3:38 pm and is filed under Draft report, FOOTBALL, Lucas Chan, Prospects, Scouting Report. You can follow any responses to this entry through the RSS 2.0 feed. Both comments and pings are currently closed.