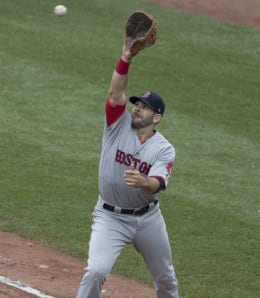 We always considered veteran first baseman Mitch Moreland to be about as average as they come, but in taking a closer look, he’s actually put together a pretty solid MLB career to date.

We were reading an article about how Friday marked the 51st anniversary of Nate Colbert‘s first homer with the Padres. This is a guy we considered one of the Padres’ all-time greats (after all, he’s the team’s career home run leader and he scored the winning run in the 1972 All-Star Game — see video below), and lo and behold as we perused his Baseball Reference similarity scores, there was Moreland up near the top of comparable players.

So if Moreland has already enjoyed a career as good as Colbert, perhaps we should re-evaluate our opinion of him. After all, here’s a little perspective for you: 192 vs. 155. That’s Moreland’s career ISO compared to that of Eric Hosmer. Some food for thought…

Now, we’re not trying to suggest Moreland is or ever was a Fantasy stud, but he definitely offered value from time to time. In fact, almost exactly three years ago, we last recommended him given the scorching start to the season he had in 2017 with the BoSox.

Unfortunately, things went downhill for him in 2018 as his power waned along with his PT. Last year, Moreland missed a fair bit of time with a back woe and then a quad injury, but he hit better while healthy and actually put up a career best OPS.

The BoSox opted to re-sign him in January to a one-year deal with a team option for 2021. This may have come as a bit of a surprise to many as Boston has been in payroll trimming mode this offseason, and with Michael Chavis and Bobby Dalbec in house (not to mention catcher Christian Vazquez also being capable of spelling first base from time to time), it seemed like they could have let Moreland walk.

Built more like a football player than a baseball dude, Moreland, 34, is entering the role player stage of his career, so he’s unlikely to top last year’s production… or even come close to repeating it. The fact that he generated an 887 OPS against righties last year should tell you exactly what he’ll be asked to do in 2020, should the season ever begin.

Moreland is never going to hit for much of a BA (.251 career), but if he somehow played full-time, he could smack around 30 dingers, and that has definite value. Now, under what scenario he’ll get anywhere near even 450 at-bats, we simply can’t imagine it.

It’s hard to justify even putting Moreland into the top 50 first basemen for 2020, meaning he’ll likely only be useful in very deep AL-only leagues, and even then, probably only as an in-season waiver claim when he gets hot.

American singer Alice Cooper has now been going strong since 1962. In 1971, he released his third studio album, Love It to Death, which contained the classic “Is It My Body?” — the B-side to the disc’s first single, “I’m Eighteen.” How’s that for a killer 45?

Now it’s your turn. Let us know in the comments below what your expectations are for Moreland this season and going forward.

By RotoRob
Tags: Mitch Moreland
This entry was posted on Saturday, April 25th, 2020 at 12:04 pm and is filed under BASEBALL, Player profile, RotoRob, Scouting Report. You can follow any responses to this entry through the RSS 2.0 feed. Both comments and pings are currently closed.