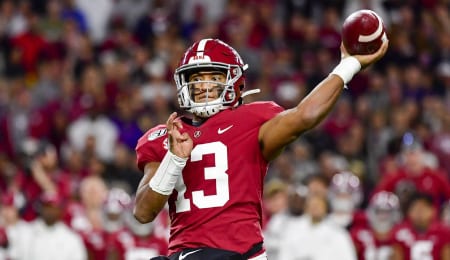 There are questions about Tua Tagovailoa’s health, but not his ability. (Vasha Hunt/Associated Press)

We’re back with more of our 2020 NFL Draft Preview, this time looking at picks six through 10. Read Part I here.

Taking over for Jalen Hurts in the second half of the 2017 National Championship Game as a true freshman, Tagovailoa followed up that performance by winning the Maxwell Award and SEC Offensive Player of the Year in 2018. Tagovailoa’s 2019 season was cut short by ankle and hip injuries, limiting him to just nine starts (in which he had a 71.4 per cent completion rate, 2,840 yards, 33 touchdowns and six interceptions). He possesses deep dual-threat potential in spread and RPO-style offenses and an explosive first-step and release. However, Tagovailoa could be this year’s riskiest prospect.

Legitimate concerns over his injuries and absence from football since November hangs over him like a bad smell. To make matters worse, the current pandemic will pressure team owners to mitigate risk as much as possible. We personally believe Tagovailoa — despite being one of the poster children of this year’s draft (see video below) — could be this year’s biggest bust. Worries over his mental maturity and how the most winning quarterback in Crimson Tide history can handle adversity in the pros should be taken seriously.

Wills started all 15 games at left tackle in his sophomore season in 2018, replacing an injured Matt Womack. Wills continued to refine his game and in 2019, became a household name, going All-SEC while gaining second-team Associated Press All American accolades and starting all 13 games at right tackle. While not very big or long for a tackle, he’s quick, sturdy and fundamentally sound in his pass rush. On top of a vicious rabbit punch, the smaller framer allows Wills to effectively leverage his weight faster against bigger opponents.

While he’s an impressive prospect for his stature, he plays far too aggressively in run blocking sets and gasses out during pass protection. Wills will need to be coached on how to block a pro defensive lineman all the way through. He must remember the fundamental technique of anchoring his body rather than letting his speed and size do the work. Moreover, Wills has the occasional habit of getting cleanly beaten by a counter or spin move inside. Again, he must be coached to anchor the entire body and block fundamentally.

The Panthers are a great contrarian team for Wills. Carolina, ranked in the bottom 15 in both run and pass protection in 2019, absolutely needs an OL to protect man-made-of-glass Teddy Bridgewater. Under former Head Coach Ron Rivera, this team loved to pound the ball successfully for two or three yards but fell apart when the line had to block deeper. Under Matt Rhule, that’s going to change. Wills will be the first speed OL on the Panthers. We fully expect a rusty Russell Okung to regress and eventually be moved to anchor a guard position instead.

The former U.S. Army All-American Bowl player and Georgia Sports Writers Association Defensive Player of the Year as a high school senior played in all 13 games as a true freshman (11 tackles, 1.5 for loss) at Auburn. Brown turned down the chance to turn pro in 2018, opting to return for a 2019 season and finishing his campaign with 55 tackles, 12.5 tackles for loss, four sacks, four pass break-ups and two forced fumbles.

Gifted with exceptional size, strength and speed, he can be disruptive at any point in the trench, but he’s most effective when he’s double-teamed, similar to Aaron Donald. Brown has a quick but not explosive first step and hunts down mistakes in the A and B gap. His preference as an upright rusher rather than a 3T will need to be taken into consideration. Brown is one of the highest graded prospects this year, and teams will appreciate him as a risk-averse selection over an upside project.

There isn’t a lot of downside here, but if there was a criticism, it’d be playing more fluid and following through on his technique when punching/swiping with his inside hand. There will be a couple of times Brown overruns the quarterback simply because he’s playing past his toes. Despite this minor flaw, there’s nothing good coaching and game film can’t fix.

Arizona could be a surprising landing spot for Brown (the majority of analysts have the Cardinals taking a tackle) but the truth is, if the team doesn’t prioritize an OT to protect young QB Kyler Murray then the organization probably thinks it’s fine. Arizona’s formula for the rebuild doesn’t include valuing lineman. Brown, on the other hand, warrants top consideration as the Cardinals’ defense ranked bottom 10 in pressures, sacks, yards by opposing RBs, turnovers and yards for loss. He will (a) anchor running lanes; and (b) apply pressure on opposing QBs.

After transferring from Miami, Henderson was a second team All-SEC pick in his sophomore season (38 tackles, five tackles for loss, three sacks, two interceptions, five passes defended and two forced fumbles) while Coach Dan Mullen called him the best cornerback he’s ever coached — after just one season spent with the Gators. In 2019, Henderson’s first-team All-SEC campaign with the Gators concluded with 11 pass break-ups, 33 tackles and three tackles for a loss, despite playing in just nine games. As a freshman for the Hurricanes, he tallied 22 tackles, four pass break-ups and four interceptions (two were returned for touchdowns) in just five starts and nine total games.

Battle tested and unafraid to make mistakes, Henderson has some of the best footwork and boundary control of any defensive back coming into the draft. He possesses NFL level closing speed, keeping YAC to a minimum in zone coverage, and can be trusted to be his own island with some good coaching. Henderson should be taught how to tomahawk the ball after closing on the receiver.

Jacksonville managed to go from having an All-Pro defense with cornerbacks Jalen Ramsey and A.J. Bouye to landsliding into cap space hell. This is not a team in rebuild. It doesn’t have the cap space nor the draft picks to even attempt to restructure the team. If he lands there, Henderson will be heading into a bad organization, with bad team chemistry, bad authority management, and worst of all: it’s Duval County. One silver lining is Tom Coughlin has the know-how to develop Henderson into a superstar but with all organizations with bad culture, Henderson is doomed to follow in Ramsey’s footsteps.

Wirfs played under Head Coach Kirk Ferentz as a true freshman and started seven games at right tackle before shifting over to left tackle in the bowl game. Wirfs was suspended for the season opener in 2018 after being charged with operating a vehicle while intoxicated, but returned to his elite form and received honorable mention All-Big Ten after starting 12 games on the right side. Mr. Hawkeye earned 2019 second-team Associated Press All-American and Big Ten Offensive Lineman of the Year honours.

Wirfs has elite speed, strength and athletic potential so is destined to be drafted by teams with offensive line issues. Given his tremendous core strength and graceful movement, teams looking to run more outside pulls and zones can consider Wirfs a more polished product than Mekhi Becton (who is expected to go in the top 10).

Despite the high floor, Wirfs does have a few fundamental holes in his techniques. For one, he leans in far too much, leading with his knees rather than his feet. Resetting his leverage will be near impossible for him. Additionally, Wirfs likes to lean outside before punching in, opening his inside shoulder for bull rushes. Like most prospects, he will need to work on finishing his blocks.

The Browns are the Browns. They are who we thought they were. This is the organization that traded Kevin Zeitler for peanuts on the dollar and now is worried about offensive line problems. Should Cleveland be his destination, however, Wirfs will benefit from landing on a team with several good OL (Joel Bitonio, Jack Conklin, acquired from the Titans) and a good running back in Nick Chubb.

In addition to being a singer, Meat Loaf is also an actor, best known for his role as Eddie in the Rocky Horror Picture Show. Here’s another track from his 1977 debut, Bat out of Hell, with “Heaven Can Wait,” one of the three tracks from the album that were originally written for a musical entitled Neverland.

Now it’s your turn. How do you see picks six through 10 playing out in the 2020 NFL Draft?

By Lucas Chan
Tags: 2020 NFL Draft Preview
This entry was posted on Wednesday, April 8th, 2020 at 8:25 pm and is filed under 2020 NFL Draft Kit, FOOTBALL, Lucas Chan, NFL Draft, Prospects, Scouting Report. You can follow any responses to this entry through the RSS 2.0 feed. Both comments and pings are currently closed.