The Wire Troll: Matt Magill Emerges as a Fantasy Asset 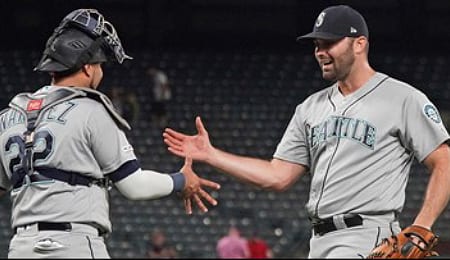 Welcome back to another week of Fantasy baseball. We’re at the end of August now, so those of you playing season-long formats are running out of time. Last chance to grab something useful off the wire!

This week, Aristides Aquino broke yet another rookie record with his 14th homer in August; the D-Backs set a new standard for mediocrity by remaining within two games of .500 for the last 60 games; and with another three bombs on Thursday, Minnesota now has 141 jacks on the road, breaking a record the Giants set in 2001.

Matt Magill, RP, Seattle Mariners (ESPN: 4.7 per cent; CBS: 21 per cent): Once upon a time, Magill was a starter and he actually pitched very well in his MLB debut (see video below), but then shifted to the pen and more or less disappeared for a few years after that. After finally breaking through as a full-time big leaguer last year, he was hurt to begin this season with the Twinkies, and was a bit more hittable upon his return. In late-July, Magill was traded to the Mariners, and has really turned his season around since. In fact, with Seattle jettisoning most of its veteran relievers, he’s recently become the closer and has been on a major roll, tossing scoreless outings in nine of his last 10 games. Magill is armed with a 96 mph fastball and a curve that he tends to thrower harder than most pitchers. His overall ERA is still up from last year, but is trending in the right direction, and with four wins, four saves and some nice K numbers, he’s a fine addition.

Carter Kieboom, SS, Washington Nationals (ESPN: 1.9 per cent; CBS: 24 per cent): Sure to be a one of the more important September callups, Kieboom has enjoyed a huge season at Triple-A. Washington’s top prospect struggled to hit in his first taste of the bigs in late-April/early-May, but the Triple-A seasoning he’s received since should stead him well. In 105 games, Kieboom is batting .305 with 16 homers while racking up the runs and ribbies. Consider him a tremendous dynasty option.

Abraham Toro, 3B, Houston Astros (ESPN: 1.3 per cent; CBS: 8 per cent): With Carlos Correa out, Toro is getting a chance to play after kicking some ass in the minors this season. Toro has yet to gain enough attention to see his DFS salary rise, so he’s a great play in that format for the time being. Heading into action Friday, he’s hit safely in three straight, including bashing his first career dinger on Thursday. Toro’s been gaining popularity on the wire, but is still widely available — for now.

Nick Solak, 2B, Texas Rangers (ESPN: 2 per cent; CBS: 15 per cent): Solak is seeing regular action, and may soon be in line for way more as Rougned Odor keeps stinking it up and is on the threshold of losing his starting 2B gig. With three multi-hit games over his last four starts, Solak is red hot, batting .375 through his first 10 MLB games. He gained solid experience at Triple-A in both the Tampa Bay and the Texas systems, but do note his .500 BABIP is going to regress and bring that BA back to earth. Still, Solak’s upside is worth investigating.

Canadian popster Amanda Marshall has been amassing hits since 1995, but is still best known for her 1996 hit, “Birmingham,” the only song she recorded that ever charted in the U.S.

By RotoRob
Tags: Matt Magill, Seattle Mariners
This entry was posted on Saturday, August 31st, 2019 at 6:16 pm and is filed under BASEBALL, RotoRob, The Wire Troll. You can follow any responses to this entry through the RSS 2.0 feed. Both comments and pings are currently closed.