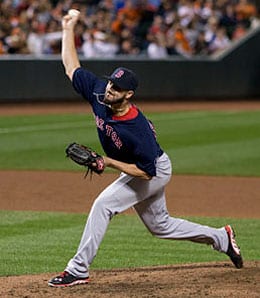 Brandon Workman has been a pleasant surprise. (Wikipedia)

Welcome back to another week of Fantasy baseball. We’re into May now, with the first full month of the season in the books. While you may have fallen behind in your league, there is still tons of time to recover. Milk that wire!

This week, the Reds finally promoted top prospect Nick Senzel to make his MLB debut; the struggling Nats fired pitching coach Derek Lilliquist; and Corey Kluber suffered a broken right arm that will keep him out until August.

Danny Duffy, SP, Kansas City Royals (ESPN: 3.6 per cent; CBS: 14 per cent): Duffy had another solid start Thursday, scattering six hits over six innings while fanning six and walking just one. While he remains winless in his two starts so far, he’s looked sharp coming off last year’s disaster. Duffy’s return to the rotation after a shoulder injury should help KC after a sluggish start to the season, but the team has yet to provide him any run support. Walks were his undoing last year, but he’s addressed that so far in 2019, so if that improved control continues, he could return to his 2017 level of value. At the very least, Duffy is finally feeling great physically (see video below).

Brandon Workman, RP, Boston Red Sox (ESPN: 0.6 per cent; CBS: 2 per cent): Workman (1-1, 1.84 ERA) has looked very sharp this season and currently has a run of seven straight hitless outings. Last year, his ERA rose a tad, but was solid. This season, Workman is pitching better than ever, keeping the ball in the yard (no homers allowed) and really limiting baserunners (0.95 WHIP). He has value in holds leagues, leading the BoSox in that department, and while he’s still third in lines for saves, with closer Ryan Brasier experiencing a meltdown on Thursday, maybe Workman can get a crack at a save or two at some point.

Ty France, 3B, San Diego Padres (ESPN: 4.5 per cent; CBS: 6 per cent): With Fernando Tatis Jr. out, France has been getting a chance to play every day and he’s starting to heat up, hitting out of the five or six hole in the Padre lineup. On Thursday, France had his first career multi-hit game, including a triple, with two runs and a ribbie. The strikeouts have been piling up for the Padres’ 2015 34th rounder, but this is a kid that’s generally been a good contact hitter in the minors, one capable of hitting for a nice BA (.282 career).

Danny Santana, OF/2B, Texas Rangers (ESPN: 26.1 per cent; CBS: 38 per cent): Santana looked like he had pretty much hit rock bottom, appearing in just 15 games for the Braves last year while batting a mere .179. But he’s been a real revelation for the Rangers, coming through again on Thursday with two hits, including a double and a homer, two RBI and a walk. Santana has never shown extra-base sock like this, and he’s back to being a legitimate stolen base threat. The switch hitter was once an extremely exciting prospect in the Twins’ organization, but really went downhill after his huge rookie season. Now, Santana looks better than ever, so grab him while you can.

Ireland’s biggest export, U2 has now been cranking it out almost 45 years. In 1987, the band hit a whole new level with the classic The Joshua Tree. The second single from the album was “I Still Haven’t Found What I’m Looking For,” and featured a pair of B-sides, including “Spanish Eyes,” a track actually recorded after the album sessions were done.

By RotoRob
Tags: Danny Duffy
This entry was posted on Saturday, May 4th, 2019 at 2:53 pm and is filed under BASEBALL, RotoRob, The Wire Troll. You can follow any responses to this entry through the RSS 2.0 feed. Both comments and pings are currently closed.