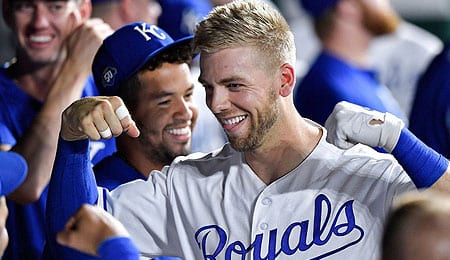 Hunter Dozier has been moving into the clean-up spot for the Royals. (John Sleezer | Kansas City Star)

Welcome back to another week of Fantasy baseball. We’re into late-April now, still in the embryonic stages of the season, but time’s a ticking for you to establish your team as a contender. Use that wire!

This week, the A’s have locked up slugger Khris Davis for an additional two years with an extension worth $33.5 million; Boston got more bad news with Dustin Pedroia‘s knee sidelining him yet again; and Cleveland prospect Will Benson became the first minor leaguer to smack four homers in a game since 2014.

Hunter Dozier, 3B/1B, Kansas City Royals (ESPN: 21.2 per cent; CBS: 36 per cent): Before his 0-for-4, three K performance Thursday, Dozier had enjoyed multi-hit efforts in six of the previous seven games. He doesn’t offer any speed, but has shown a massively improved batting eye, helping him score plenty of runs for a team that’s offense has been better than expected. Dozier has already spanked five homers and driven in 10 runs (including the walk-off hit in the video below), and the former first rounder is looking very much like a late bloomer. He’s got serious raw power and a strong throwing arm but questions remain about his fielding prowess and ability to hit for average. Dozier had pressure to succeed given his draft slot; perhaps his injury-riddled 2017 sent him off course a bit, but he’s definitely back on track now. Hey, better late than never!

Yoan Lopez, RP, Arizona Diamondbacks (ESPN: 0.1 per cent; CBS: 1 per cent): The Snakes have struggled for years to find a consistent closer year in and year out. Could Lopez be the long-term solution? Currently, he’s providing nice value in holds leagues, and has tossed scoreless ball in nine of his 10 outings to begin the season. After looking real good in an eighth inning role late in 2018, Lopez has already matched the number of games he appeared in last season, and if he can control his overpowering heat, he definitely has the potential to close down the road. Patience will be required as he has very little experience above Double-A.

We’ve got another track from singer-songwriter-guitarist Bruce Cockburn here. In 1993, he released his 18th album, Christmas, and from this effort in his take on the traditional “I Saw Three Ships.”

By RotoRob
Tags: Hunter Dozier
This entry was posted on Saturday, April 20th, 2019 at 1:43 pm and is filed under BASEBALL, RotoRob, The Wire Troll. You can follow any responses to this entry through the RSS 2.0 feed. Both comments and pings are currently closed.