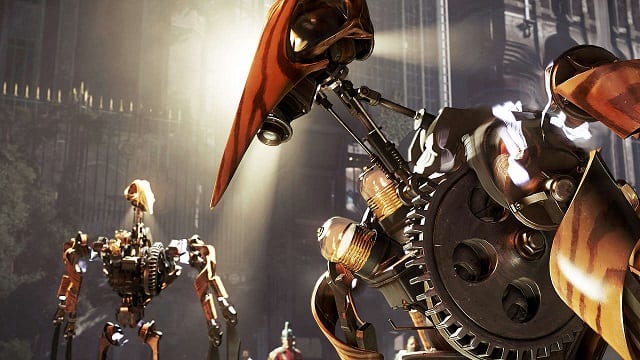 The original Dishonored landed last generation with hype and acclaim, and then it went quiet following The Brigmore Witches. The sequel surprised everyone, and its announcement was eclipsed by the stunning Fallout 4 reveal at Bethesda’s 2015 E3 panel. However, Dishonored 2 is well worth its development time and provides one of gaming’s most unique experiences.

If you played the original Dishonored, not that much has changed in terms of control scheme. Both Emily and Corvo use essentially the same controls, with the only difference being their leveling path. Melee has improved a bit, though the amount you use this depends heavily on your style of play.

One of the biggest changes is the ability to stun an opponent either via a quick sword jab or by correctly timing a parry. This opens the door to an additional choke-out or kill. Other than that, you’ll feel right at home if this is your second go-around in the realm of Dunwall. For newcomers, they’ll find that Dishonored plays much smoother than other first-person stealth games.

Dishonored 2 presents a very stylized aesthetic, much like its predecessor. However, in addition to the expected improvement that comes with a generational hardware leap, it feels like the development team simply decided to bring much more variety to the environments.

Much of the first game took place in industrial areas or inside dingy buildings. Here, you have the seaside country of Karnaca, which offers everything from a brighter version of Dunwall’s industry churn to large palaces, cliffside buildings and lively towns.

While none of the models will push the graphical boundaries of hardware, everything just looks better and more vibrant than the first game.

The voice cast of Dishonored 2 features some fairly big Hollywood talent, including Rosario Dawson as a primary supporting character and Gotham’s Robin Lord Taylor as the mysterious Outsider.

However, all of the voice work is purely functional. It’s not bad per se, but the writing doesn’t really support much wit or personality from any of the characters, so while you’ll never be pulled out of your disbelief with a bad performance, none of the work is particularly memorable.

Simply put, Dishonored 2 has some of the most inventive level design we’ve ever seen in video games. Starting off with the opening scene and the initial choice of Emily or Corvo as your playable character, each level builds upon each other, at first feeling like Dishonored 1.5. Then, about a third of the way through the game, you hit the Clockwork Mansion and suddenly it begins to wow you.

Each subsequent level adds one unique aspect, whether it’s fighting witches or walking through fractures in time or pulling off a steampunk heist in a Bond villain-esque palace, all culminating in the final level that uses nearly all of the unique elements of the previous game. (One of the game’s only true missteps is that its time-fracture mechanic is exclusively used in one level.)

How you progress through this 15-to-20 hour adventure is purely up to you. You can play it simply as a first-person shooter with platforming elements, thanks to a variety of crossbow and pistol ammunition. You can go the middle road by blending stealth and violence, only shedding blood when necessary. Or you can work completely in stealth, loading and re-loading to make sure you don’t get seen as you choke out and sedate guards along the way.

Dishonored’s powers take centre stage here. The initial loadout feels very similar to the first game, and you’ll play that way for a few hours until you find enough runes to break into new types of powers.

Emily and Corvo branch off differently, so while Emily can grab guards from afar, Corvo can possess them, making for a good amount of replayability — the New Game Plus mode lets you keep all of the runes you’ve earned so you can level up immediately.

Guard AI is typically good, and those nasty clockwork soldiers can see in almost 360 degrees, putting all of your skills to the test. This may frustrate players who don’t have the patience for stealth, but that’s why the game gives you the ability to go in guns blazing if you want.

One addition to Dishonored 2 is the ability to break down and craft bone charms (items that buff certain abilities). However, while you can customize how you mix them, all it does is stack powers on top of each other rather than creating new and unique ones.

How will you defeat your enemies? Part of Dishonored’s beauty lies in its freedom of choice. In one level, we found a very clever way to scale up and across the entire building rather than go inside.

So rather than infiltrate from front to back, we arrived at our target nearly unscathed, sedated the guards on his balcony, and snuck in to take him out. Every target has multiple paths to him, and unlike Assassin’s Creed, there truly is freedom in how and when and why you get there.

Dishonored 2 is one of gaming’s most flexible, inventive, and fun experiences, particularly for those who love to be stealthy. Some of the levels are so complex and intricate, we have no idea how they could’ve been designed, and the scope and size is so big that it’s easy to replay level by level and still find something new.

While 2016 saw a significant number of Game of the Year contenders, few can eclipse the sheer amount of creativity Arkane Studios has put into Dishonored 2. It’s a must-play.

By Mike Chen
Tags: Bethesda, Dishonored 2, Video Game Review
This entry was posted on Tuesday, November 22nd, 2016 at 4:27 pm and is filed under Mike Chen, Video Game Reviews. You can follow any responses to this entry through the RSS 2.0 feed. You can skip to the end and leave a response. Pinging is currently not allowed.