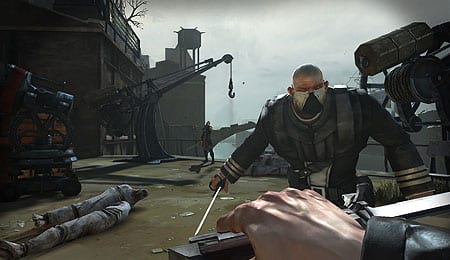 Before that guard can get the shot in, a quick blink and stab will do the trick.

Going into Dishonored blind was just about the best way to go in. Not expectant of a thing, I was allowed to discover a truly brilliant game. More than being clever, enveloping or anything else that Dishonored is, it’s just plain fun. It’s a collision of amazing pieces orchestrated into a robust package, and what comes together is a sheer pleasure.

The controls for Dishonored are pretty much standard among games today — especially in the case of first-person shooters. Dual analog control and trigger attacking is solid and presents an appropriate learning curve.

The foremost and most noticeable part of this game is its atmosphere. Steampunk in every detail, the world of Dishonored comes to life with its BioShock-esque design. The posters, pipes, bricks and mortar all serve to create a lush and beautiful world. Now, that’s not to say that I was completely lost inside; there are some absolutely atrocious textures, gigantic pixels and not a crisp line to save my life — even on PC! Despite the truly disappointing lack of fidelity, the breathtaking lighting and vivid colours bring me back.

The voice acting in the game is pretty good but certainly nothing to write home about. Characters aren’t necessarily as stiff sounding as their bodies often appear, but that’s almost as much as I can say about it. The mysterious character who gives Corvo his magical mark is easily the best voiced character and adds a healthy layer of intrigue.

Equal parts BioShock, Assassin’s Creed and Fable, Dishonored is a first-person stealth action game that is kinetic and fluid. Players take on the role of Corvo, a hired hand of the empress and bodyguard to her and her daughter. Rough times incite a seedy usurping, and Corvo is wrongfully indicted for the murder of the empress. Before Corvo is executed, a band of rebels who know the truth set him free, and he is enlisted by this underground organization to restore the empress’ daughter to her rightful reign.

The good stuff is the killing. Corvo is given a blade in his right hand and a gun in his left. The gun can be swapped out for grenades, a crossbow with various kinds of darts and other gadgets. Not only that, but it seems in the realm of Dishonored, shadow magic is a thing, and it is awesome.

One of the first bits of magic Corvo receives is the blink ability, akin to the phase-shifting teleportation skill of the same name found in Starcraft. By holding down the left-hand action skill, an icon will show where Corvo will blink to, and how far he will fall. This skill quickly became my favourite part of the gameplay, zipping from spot to spot for exploration, and even blinking behind people’s backs to get a swift, assassin-worthy kill.

Though the game rewards those who take the non-lethal approach by allowing the world and endgame to be more pleasant, killing is just too fun. Sword play is extremely thrilling, and all the greatest skills and gadgets are lethal — from calling in a swarm of plague-infested rats to devour a guard to setting a mine that springs an explosion, the most creative, exciting takedowns are the ones that leave enemies strewn about and bleeding. Plus, being unseen is actually too easy, so challenging enemies can keep the game more lively.

Other sweet abilities include passive enhancements, like being able to double jump, earning adrenaline to use fatalities and having corpses turn instantly to dust a la Buffy The Vampire Slayer for the sake of not being detected. Again, the better and even more useful abilities could have non-lethal counterparts, like blinking unconscious guards to rooftops where they won’t be found. A bit more creativity for non-lethal play could have gone a long way, whereas now it feels like an afterthought or obligation.

Given to Corvo right off the bat by a mysterious character is a mechanical, displaced heart of strange powers. It shows where runes and bone charms are located while it’s equipped, beating harder and faster as pick-ups are close by. Runes can be spent to unlock skills to upgrade them, and bone charms serve as perks. The perks generally help lend to different play styles by making chocking instantaneous on one end, to making gun shots more reliable on the other; there are even defensive abilities and forgiving perks like having greater healing when using potions and food.

Though it would seem that being pointed to the exact location of upgrades might be a bit too easy, it really doesn’t take away from the exploration. The game is more or less linear with nine major missions, but each area is alive and unique. Exploring the rich and varied landscapes is satisfying and greatly extends the experience. Some missions can even be done in a matter of minutes, which is something I find very bold of Arkane Studios, but it seems it was right to believe that players would be interested in exploring what side missions, errands and collectibles the game has to offer.

All of this is set to an admittedly short but satisfying story. The introduction of the aforementioned plague that turns rats and people into zombies adds flavour to the palpable political and social atmosphere of the game. With the amount of measured chaos created by Corvo, the attitude of the nation’s inhabitants does noticeably change and provides a refreshing experience with a bit of mystery. No matter what ending people get, though, it doesn’t pay off quite like it should. But, you can’t have it all, can you?

Dishonored was a great surprise for me. I don’t know that I’d ever think to mix the best parts of BioShock and stealth games together, but it made for an amazing experience that took familiar parts and made an experience all its own. Being a savvy assassin is truly satisfying and makes me feel like a badass. While being caught is a little too fun for comfort and being non-lethal is hardly satisfying, I’m ready to play the game again. In fact, I’m ready for the next one. More please!

By Gregory Hutto
This entry was posted on Tuesday, October 16th, 2012 at 11:29 am and is filed under Gregory Hutto, Video Game Reviews. You can follow any responses to this entry through the RSS 2.0 feed. Responses are currently closed, but you can trackback from your own site.