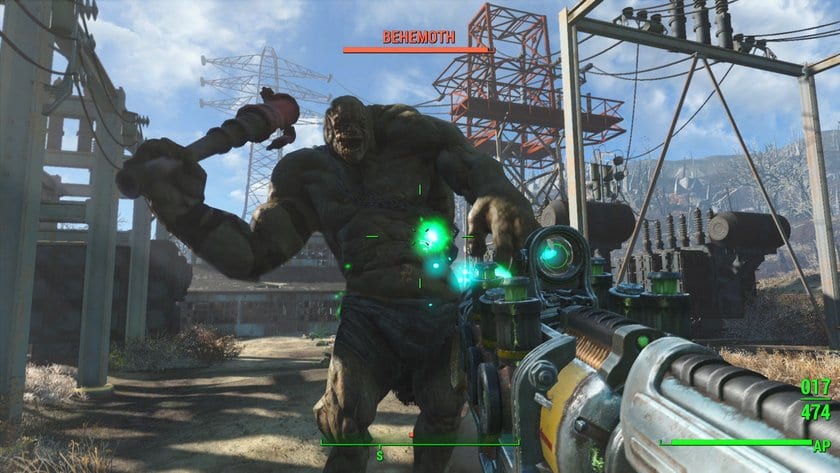 You could literally spend hundreds of hours wandering the wastelands.

Rumours of Fallout 4 have been in the game community for a long time, so this year’s E3 announcement got everyone in a tizzy fast, even more so when the release date was mere months after the unveiling. Even if Fallout 4 was in secret development for years, it’s still a bit unbelievable that it’s actually here — and in many cases, it’s everything you could hope for and more.

Most of Fallout 4’s gameplay will feel very familiar to anyone that played previous console iterations. You’ll move around, you’ll fight in VATS, you’ll do some not-terrible first-person shooting, and you’ll fire up your Pip Boy to manage stats and inventory.

The first thing that veterans of Fallout 3 and Fallout: New Vegas will notice is that the button scheme is just different enough that you’ll be hitting the wrong button for the first few hours. The reason for this is a new two-tiered melee system, one for regular attack/fire and one for a power attack. It’s not better or worse, it’s just different.

After you finish the tutorial, you’ll get your first taste of VATS. In the last generation, VATS turned combat into a semi turn-based set of encounters. At the very least, it let you take your time and plan out strategy. In Fallout 4, VATS slows things down rather than stopping, which means that for fast-moving enemies (such as feral ghouls), you’ve got to think quickly and execute fast. This adds a new level of tension to the game, particularly in hairy situations with tons of enemies or really angry deathclaws.

Where things wildly change is in the new home-building feature. We’ll go over the logistics of it below, but purely from a controls perspective, this presents a very Minecraft-esque feel. Largely menu driven, you’ll still place and rotate stuff in real time. This calls for an alternate set of controls, which become active once you go into the workshop system (on PS4, pressing the touchpad while within one of your encampments).

Fallout 3 and Fallout: New Vegas presented huge open worlds, parts of which looked beautifully distressed while others looked pixilated and clunky. Fallout 4 takes this generation’s hardware and pushes the open world much further graphically. The wilderness and desolation of post-apocalyptic New England appears much sharper and more detailed than the Capital Wasteland or New Vegas, and a much-improved lighting system grounds everything in reality.

While the character models won’t be among this generation’s best, they’re still a marked upgrade from before. This isn’t a surprise, since open-world gaming tends to leave less processing power for visuals, and characters look like they belong in this generation of hardware. Animations can still be a little stiff, particularly in combat, but the VATS system continues to work and create stylish moments of violence through camera work.

Fallout 4 also brings along the tradition of various wasteland radio stations — some with music, some with talk, and some with a mixture of both — and more speaking characters than you can possibly imagine. In general, the voice acting is strong, though like the previous games (as well as Bethesda’s Elder Scrolls series) it’s clear that some actors played multiple roles for sheer logistical reasons. It’s also worth noting that for the first time in the series, your character has a voice.

Fallout 4 is a paradox. On one hand, it’s nearly identical to previous Fallout experiences. On the other, it’s absolutely nothing like them. It gives you both options and lets you decide what you want to do.

The core Fallout experience is roughly the same, it just looks better and is more refined. You’ll explore the wasteland, embark on a personal quest while picking up dozens of side quests, run into things both humorous and heart-wrenching and shoot a lot of stuff.

Some gameplay differences — a graphical leveling up system; radiation now affects your max HP; VATS is in slow-motion instead of stopped time — show the polish Bethesda put into the core game. It truly is the Fallout experience taken to the next level with new types of environments, weapons, companions, world-building and stories. In this aspect, it’s very similar in the leap between The Elder Scrolls 4: Oblivion and its follow-up, Skyrim.

But, there’s a whole new aspect to the game. As you accumulate settlements (based on completing side quests), Fallout becomes equal parts Minecraft, The Sims and a first-person tower defense game. Longtime players know they can pick up nearly everything in the world, and now there’s finally a use for it.

Items are broken down into core components, which can be stored at individual settlements for building things (beds for amassed settlers, fences and structures, turrets for defense) or modding your weapons/power armour. The game thankfully makes this easy with a one-button scrapping system.

It’s easy to lose yourself in this, and even while you’re out questing, you’ll receive notifications that one of your settlements is under attack. When they’re not fighting off raiders and ghouls, they’ll be making the settlement work by doing things like harvesting the crops you’ve planted.

Each settlement has a needs metre (food, water, happiness, etc.), so once you establish your buildings and community, you’ll need to manage them. We imagine Bethesda will be cribbing this for its next-generation Elder Scrolls title.

If there’s one detriment to Fallout 4, it’s that it can be too big and too overwhelming. This is truly an open world; you can veer off and ignore the main quest for dozens of hours, you could spend 10 hours simply building up your homestead and defenses, or you can focus on your character’s main motivation. Or you can do all three. There’s a bit of a learning curve, particularly with the building aspect of the game, and you’ll literally just stumble upon detours and deviations as you’re going from point A to point B.

Because of the sheer volume of the game, it can be 10-to-15 hours until you feel like you’ve got the hang of it. If you’re focusing mostly on the main quest with some dips into building and side quests, you’re looking at about 30-to-40 hours. However, Fallout 4 could be played indefinitely, and with the promise of campaign DLC down the road, it could very well sustain you into the next generation’s Fallout 5.

A post-apocalyptic sandbox in the truest sense, Fallout 4 gives you the opportunity for a completely customized experience. The sheer scope of the game and the long ramp-up period may be offputting to a few, but once you see the buffet of gameplay options, you’ll be hard-pressed to find a more refined or free experience.

By Mike Chen
Tags: Bethesda, Fallout, Fallout 4, Video Game Review
This entry was posted on Tuesday, November 17th, 2015 at 10:09 pm and is filed under Mike Chen, Video Game Reviews. You can follow any responses to this entry through the RSS 2.0 feed. Both comments and pings are currently closed.