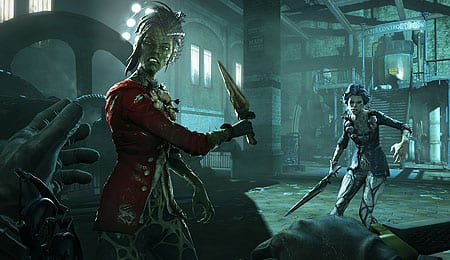 The Brigmore Witches concludes Daud’s story from The Knife Of Dunwall.

The Knife Of Dunwall shifted the focus of the Dishonored story, taking you away from the heroic Corvo to the anti-hero Daud (voiced by Hollywood tough guy Michael Madsen). That DLC expanded the Dishonored universe while providing a well-paced romp through the steampunk city of Dunwall. I’ll avoid getting into spoiler territory here, but it’s safe to say that Daud finishes The Knife Of Dunwall on a quest, and that journey continues with The Brigmore Witches DLC.

From a technical perspective, The Brigmore Witches only adds one gameplay tweak. Previously, bone charms were activated purely as bonus mechanisms, but The Brigmore Witches brings a different perspective to this by adding corrupted charms into the mix. These charms come with a price, so while they may give you one power benefit, they will negatively affect your stats and powers in another (for example, mana regeneration). It’s a small twist but effectively gives veteran Dishonored gamers something new to experiment with.

The Brigmore Witches can be played as a standalone experience starting with a neutral chaos level and default powers/money. However, if you’re going to play this, it really makes sense to have completed The Knife Of Dunwall, as your gameplay choices and powers/inventory carry over. Level design and pacing is similar to The Knife Of Dunwall, as the action takes place over a mix of new areas and recycled environments (with richer exploration than when Corvo traverses them).

To say more about the story does a disservice to both Daud DLCs, so it’s best to put it this way: it’s more Dishonored. What you loved about the game is still here, and the technical hiccups that popped into the experience every now and then still remain. However, Dishonored was one of 2012’s standouts for a reason, and if this is the final journey to Dunwall until the PS4/Xbox One generation, it’s a worthy sendoff.

The Brigmore Witches doesn’t bring anything new to the table, but that’s not necessarily a bad thing. Daud’s story finishes, and with it, one of this generation’s most original and effective games comes to a close.

By Mike Chen
Tags: Video Game Review
This entry was posted on Thursday, August 22nd, 2013 at 9:36 am and is filed under Mike Chen, Video Game Reviews. You can follow any responses to this entry through the RSS 2.0 feed. Both comments and pings are currently closed.