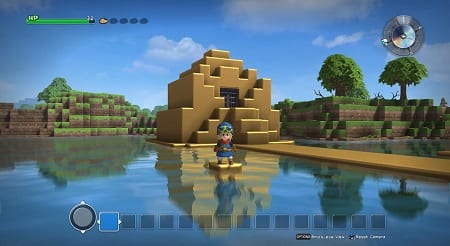 Visually, Builders is much more interesting than Minecraft.

We don’t even know how many platforms we own Minecraft on, but it’s more than three. Why? We guess we kept waiting for it to truly click. To dig its blocky nails into us and refuse to let go, leading to hour after hour spent meticulously crafting, building and manicuring our little world.

It never did. While we always appreciated what it was and what it could be, we simply never had the kind of time needed to devote to it. All of this is a roundabout way of saying our guard was up for Square-Enix’s Minecraft-inspired mash up Dragon Quest Builders. Instead, it’s the one that finally hooked us.

There is a lot to do here and a lot to keep track of, and while the game does an admirable job of keeping everything reasonably streamlined, it runs into trouble with its control mapping. In particular, both jumping (circle) and attacking (triangle) feel off, and even after dozens of hours it never felt natural, resulting in inadvertently destroying things.

Structural issues aside, Builders ably keeps things at your fingertips, allowing for the quick farming of materials as well as constructing floors, walls, furniture and so on. This is particularly true once you build the “Colossal Coffer,” which enables you to collect resources unimpeded as anything beyond your modest carrying capacity automatically ends up in the coffer (and can be accessed at any time).

Combat is largely uninteresting, limiting you to a handful of attacks and offering almost nothing in terms of defensive capabilities. You can muscle your way through most fights simply by stocking up on healing salves and edible items, though it cranks up later. It’s simply a small part of the whole, and all of the game’s memorable moments stem from your creations, not enemy encounters.

Rounding out the uneven handling is the camera, which you control via the right stick. As long as you’re in the overworld with open sky above, it’s just fine. Duck under a roof or start mining into a hillside, however, and the camera stays pulled back and you suddenly appear in a vague outline form. Adjust and you’ll be treated to a claustrophobic view behind your character. Neither is particularly enjoyable.

While there’s a certain charm to Minecraft’s voxel graphics, we found the more traditional visuals of Dragon Quest Builders to be more appealing even as it uses the same cube-based approach to construct its world. The colours are bright, the terrain is varied and the things you can build are delightfully elaborate. It’s a lot of fun to look at.

Unfortunately, the audio side doesn’t hold up nearly as well. Background music is culled from previous Dragon Quest games, which is a nice bit of nostalgia, but so many basic actions trigger the music to restart that you end up looping the same sections over and over again.

Our story picks up after some very bad things have gone down in Alefgard, leaving the world little more than a smoldering ruin of its former greatness. Into this situation steps “The Builder” (that’s you), a non-hero that nonetheless possesses the forgotten ability to build, and it is you that is destined to lift this world up and return it to prominence.

Fans of the series will recognize the setting and back story as an alternate reality to the original game’s conclusion, but being versed in Dragon Quest lore is unnecessary. In truth, the story seems to mostly exist to lead you through all the things you can do. You start from the most humble of beginnings with materials and structures and steadily ascend from there.

Being led along that path is one of the biggest differences between this and Minecraft, and that sense of guidance, however loosely it’s applied, really helped us get invested. There’s still no urgency to the quests, and the rewards for completion are modest, but they steadily introduce new mechanics, areas and recipes, all while encouraging exploration.

Dragons Quest Builders is split into five chapters, each with its own boss and set of challenges, ranging from straightforward (e.g., construct a five-star base) to very difficult (build a pond, heal patients in your infirmary, etc.). Again, though the challenge increases, the game does a good job of bringing you along at a comfortable pace so you never really feel overwhelmed.

Of course, all of that is ultimately window dressing since, as with Minecraft, the star attraction is putting hundreds of tools of construction at your fingertips and seeing what you can do. And though it may initially seem limited compared to its inspiration, Builders eventually offers a ton of options for your building needs.

Plus, though monsters will still arrive to wreck your walls and plunder your village, destroyed objects remain behind as cubes and need only be picked up and put back rather than rebuilt. Town members will also help in the defense of your city, and later on they can even be taken into the world as party members.

Despite the inclusion of NPCs, Dragon Quest Builders is a decidedly personal affair, which is in contrast to the social nature of Minecraft, in which players visit each other’s worlds. That worked well for our sensibilities, but if you want friends to be able to tour your creations from their system it’s worth noting that isn’t in the cards here.

Dragon Quest Builders is one of our favourite games of 2016, taking an established formula and making nothing but smart, inclusive tweaks to broaden its appeal. If you’ve always wanted to like Minecraft but were kept at bay by its lack of direction, Builders is the game you’ve been waiting for.