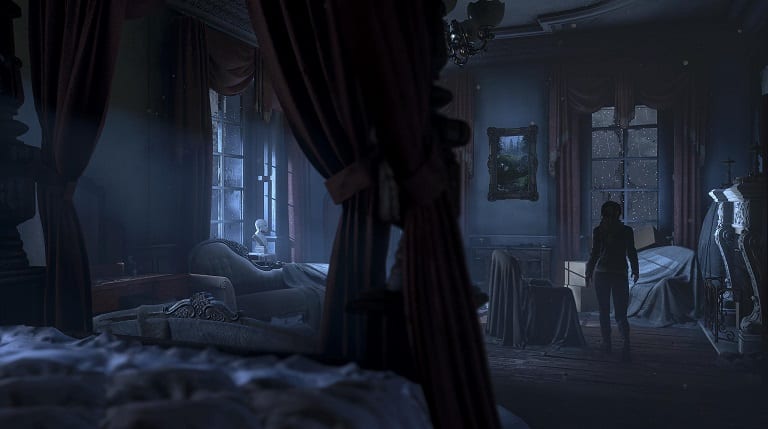 Combat takes the day off in Blood Ties.

Originally released last November as a timed exclusive for Xbox One, Rise of the Tomb Raider has finally made its way to PlayStation 4 in the form of Rise of the Tomb Raider: 20 Year Celebration (the new version is available on Xbox One as well). It contains the base game and all previous DLC as well as the all-new Blood Ties and Lara’s Nightmare.

As we reviewed the full game at launch in 2015 we won’t spend much time discussing it. Suffice to say that nothing has changed, and Rise remains one of the best games of this console generation. The mix of exploration and action is top notch, and while our biggest gripe was that it felt a little too much like the original reboot at times, it never comes close to derailing the experience.

In terms of the older DLC, Baba Yaga: The Temple of the Witch was a story-based add-on that offered a standalone adventure for Lara Croft. It has an enjoyable supernatural slant but is rather short. Cold Darkness Awakened, meanwhile, was a new Expeditions option that felt very much like an entry point for something akin to Call of Duty’s zombie mode.

Another previous Expeditions expansion, Endurance Mode, has been expanded with the addition of online co-op. For the uninitiated, Endurance tasks you with hunting down artifacts while managing food and warmth meters — so, for instance, you’ll need to eat berries or hunt animals to survive. It was always solid, but having a second person along for the ride adds a new layer of fun.

There’s also a new piece of story-driven DLC in Blood Ties. Upon receiving a note from your Uncle that indicates, absent evidence to the contrary, he is the rightful owner of Croft Manor, Lara decides she must scour the manor to find proof. What follows is one of the more interesting add-ons we’ve seen from any game as it is completely devoid of combat.

Instead of fighting enemies, Lara takes a walk down memory lane as she unearths audio logs and diary entries that cover various interactions from her youth. While we don’t want to oversell the impact a roughly 60-minute expansion can have, the back story is well crafted and adds another layer to Lara’s character going forward. The manor itself is visually interesting to explore as well — and PS4 owners can experience it via the new PlayStation VR.

If you skew more to the action side, Lara’s Nightmare is the newcomer to know. Set in the all-new Croft Manor, the latest Expeditions expansion doesn’t beat around the same bush Cold Darkness Awakened did: these are zombies, and they want to kill you. Subtlety be damned.

It’s impressive how well the manor doubles as an intense combat setting with hallways and small rooms that offer no respite from your foes and cranks up the tension. To succeed you’ll need to locate three floating skulls and dispose of them. Destroy them all and a giant floating skull will appear for the final showdown. It’s straightforward but effective.

After giving last year’s release a 4.5, we feel compelled to inch the score upward for Rise of the Tomb Raider: 20 Year Celebration due to the amount quality DLC, both previous and new, that has been added.

If you’re a PS4 owner, you need this game in your collection. If you own the game on XB1 and haven’t done so already, it’s time to take the plunge on a Season Pass.

By HC Green
Tags: Lara Croft, Rise of the Tomb Raider, Rise of the Tomb Raider: 20 Year Celebration, Square Enix, Video Game Review
This entry was posted on Wednesday, November 9th, 2016 at 3:44 am and is filed under Herija Green, Video Game Reviews. You can follow any responses to this entry through the RSS 2.0 feed. You can skip to the end and leave a response. Pinging is currently not allowed.