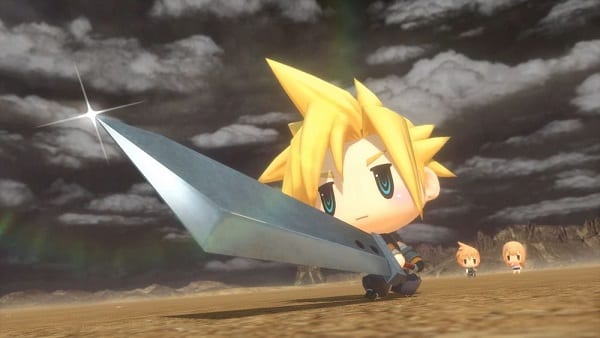 Like many, our love affair with Final Fantasy began with Final Fantasy VII. It has continued now for nearly 20 years and includes not only the numeric sequels but also the MMORPG, spinoffs and, of course, Final Fantasy Tactics (arguably our favourite game, ever). The latest addition is World of Final Fantasy, a nostalgic endeavour aimed squarely at the hearts of longtime fans.

There are two setups available and two ways to play the game, and you’re free to alternate between them at your discretion. Actions can be selected either through the basic or classic control schemes, with the former being more streamlined (singular inputs, ability shortcuts, auto targeting) and the latter offering added options (manual targeting, access to all abilities and items).

Final Fantasy’s classic Active Time Battle (ATB) system is in place, although it’s up to you whether you stick with the active option or switch over to wait mode. Active means time flows continuously whether or not you select an action, whereas wait mode will pause until your input is made. It’s a nice choice to have, catering to those that want a brisk pace as well as those that prefer to act more deliberately.

Regardless of how you choose to proceed there’s going to be some down time during encounters when you’re simply watching icons race to the top of a meter to determine the next turn to be taken. There’s an option to speed up time — it’s also present during dialogue sequences if you’re in a hurry or would rather read than listen — that you’re apt to use liberally, particularly in wait mode.

While everything works effectively, the high encounter rate means lots of battles, and the simplicity of many of those fights can eventually make combat repetitive. There’s an option to flip on auto-battle with the press of a button, though that simply repeats your last action as opposed to mixing in abilities or taking any strategic responsibility.

Without question, World of Final Fantasy is the cutest title ever to bear the franchise’s name. The chibi characters and collectable monsters (called “mirages”) are relentlessly adorable, and the inclusion of so many classic characters from the series’ lineage in these forms is almost too much. Level design doesn’t fare nearly as well, but the world itself is still rather endearing.

Delightful soundtracks are a staple of Final Fantasy games, and although this lacks the grandeur of more serious entries it’s still very well done. Voice acting is available in Japanese or English, and for the most part it’s quite good — occasionally a townsperson will sound out of place — though the dialogue between the two main characters (played largely for laughs) will induce groans a plenty.

Twins Lann and Reynn awaken in an almost empty world with no memory of their previous life. They meet a stranger named Enna Kros, who tells them they must venture to the world of Grymoire if they are to recover their memories. Along with their fox sidekick Tama, the twins head through the portal and find that they’re giants (or “jiants”) in this new place.

More importantly, the pair learns that they’re able to capture and control mirages, the game’s term for monsters. This unique ability, coupled with their size, suggests the two of them are part of a prophecy, which draws the attention of the Bahamut Army. Now the twins must battle the world’s oppressors by collecting mirages while also trying to piece together their mysterious past.

It’s a decent story, albeit one that’ll almost certainly be better received by Final Fantasy fans as many of the highlights are the inclusions of familiar characters from previous games (Cloud, Tifa, Refia, Yuna, Lightning and so on). Minus the nostalgia element, you’re left with the silly/annoying interplay between the twins and a narrative that’s heavy on RPG tropes.

Although the story embraces the franchise’s history, gameplay borrows from the Pokémon series. As noted, you collect mirages, up to four of which are then brought into battle to fight alongside (or, more likely, on top of) you. Mirages are sorted as small, medium or large, and stacks contain one of each size — the twins can toggle between Jiants (medium) and Lillikins (small) so you’ll have two setups per.

This may seem pretty straightforward initially, but there’s a good amount of depth bubbling beneath the surface. Each mirage you collect has unique abilities along with elemental strengths and weaknesses, and customizing your stack will magnify (or neutralize) those areas. Mirages also have skill trees to unlock new skills, improve stats and, eventually, evolve into larger, more powerful versions.

Given the sheer number of mirages out there, you’re free to tinker with your team nearly ad infinitum, stacking divergent types to increase the number of ways you can strike or putting two of the same type together to amplify spells (e.g., fire becomes fira). What the game lacks in battle variety it tries to make up for by allowing tons of customization.

Beyond the standard dungeons and boss fights, World of Final Fantasy also offers the chance to unlock more than a dozen series favourites, some of whom we noted above. They’re staggered throughout the game and require the completion of special “intervention quests” to unlock, but being able to summon Cloud to do an omnislash or Squall for his gunblade’s Lion Heart is soooooo worth it.

Addicting, adorable and absolutely saturated in nostalgia and fan service, World of Final Fantasy is a great buy for anyone that loves the characters and monsters of that world. It does feel like a slog here and there, but it never stopped us from plowing through the game’s lengthy campaign.

By HC Green
Tags: Final Fantasy, PlayStation 4, PlayStation Vita, Square Enix, Video Game Review, World of Final Fantasy
This entry was posted on Friday, November 11th, 2016 at 4:42 pm and is filed under Herija Green, Video Game Reviews. You can follow any responses to this entry through the RSS 2.0 feed. Both comments and pings are currently closed.