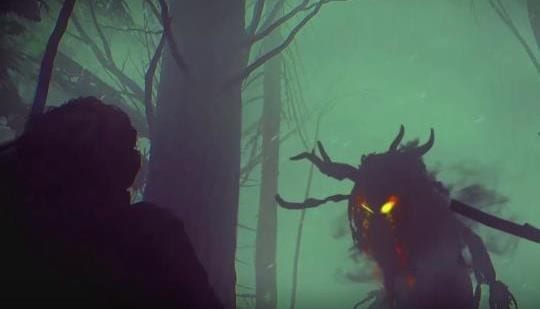 Unnatural enemies are afoot in this add-on.

While Tomb Raider was a fantastic relaunch to the long-running series, the Definitive Edition reinforced a rarity in modern AAA gaming: it did little with post-launch content. Its sequel, Rise of the Tomb Raider, elects to embrace that model instead with the release of Baba Yaga: The Temple of the Witch, a story-driven piece of downloadable content.

It doesn’t appear you need to have finished the game to start the DLC missions, as it’s triggered from a point in the Soviet Installation. You’ll actually return there during the quest to gather up some resources — it’s a bit disappointing to see existing areas repurposed — but the majority of the action will take place in the heretofore unseen Wicked Vale.

There isn’t a lot on the story side here as a chance meeting with a young woman ends with you agreeing to try to track down her grandfather, who has foolishly entered the Vale to seek revenge on the witch (Baba Yaga) that killed his wife long ago. It’s entirely tangential to the main plot and doesn’t serve to further any of the in-game developments, instead existing as a standalone adventure for Lara Croft.

Although the narrative disconnect feels like a missed opportunity, the actual gameplay found within Baba Yaga is first rate. Outside of a few encounters with straggling mercs from the main game, you’ll face off against a more supernatural breed of foe here. Granted, they’re not dramatically different in terms of difficulty or tactics, but they do create a different feel.

Exploration and environmental puzzles continue to be featured as well with the usual supplemental documents scattered about to fill in the story. The DLC’s main brain teaser is on par with anything in the main game, requiring a little lateral thinking (and some trial and error) to solve.

As is often the case, the “bang for your buck” will rankle some as the roughly two-hour add-on costs US$9.99. It’s a quality offering to be sure, but it doesn’t ripple out into, or really extend, the main game. You’ll also net a couple of extra goodies (a new bow with a unique arrow type and a new outfit) and the chance to earn some achievements.

If you enjoy the Tomb Raider formula, Baba Yaga: The Temple of the Witch is a fun extension of that gameplay. While it’s a little light in key areas (most notably story and length), Baba Yaga is a nice excuse to spend a couple more hours with Lara.

By HC Green
Tags: Baba Yaga The Temple of the Witch, Definitive Edition, Lara Croft, Rise of the Tomb Raider, Tomb Raider, Video Game Review
This entry was posted on Thursday, February 25th, 2016 at 2:24 am and is filed under Herija Green, Video Game Reviews. You can follow any responses to this entry through the RSS 2.0 feed. Both comments and pings are currently closed.