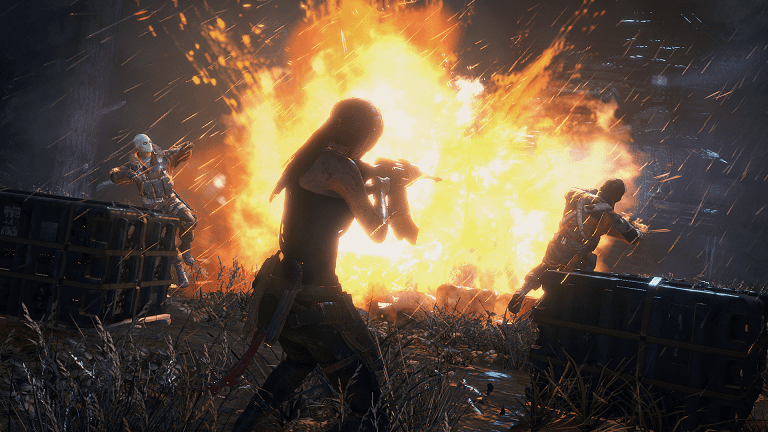 Square-Enix’s 2013 reboot of the Tomb Raider franchise was equal parts impressive and necessary, moving Lara Croft in a decidedly more rugged (and human) direction — not unlike what Daniel Craig has done for the James Bond films. Microsoft was suitably impressed as well, ponying up to ensure its sequel, Rise of the Tomb Raider, began its life exclusively on the Xbox. Time to find out if it was money well spent.

As with the previous game, Lara’s time is split between exploring, platforming and fighting. Most of your time will be spent on the first two, and it’s the highlight of the game. Lara moves swiftly across the world, clambering up walls and leaping over crevices. Pathways are clearly marked, and the game mixes and matches its elements well so that you’re not repeating the same activities too often.

Some parts feel like digital leaps of faith — axe extenders, for instance, are a new tool at your disposal that doesn’t seem as though it would work in the real world — but most are weighted in at least some semblance of reality.

Combat hasn’t changed much. You’ll still toggle between four unique weapon types (bow, pistol, rifle, shotgun) that can be upgraded and added onto as you progress. Aiming is crisp and most weapons feel appropriately beefy, particularly the bow. A little more variety in the counters would’ve been nice, as you use them enough that seeing the same few animations repeated gets a bit stale, but there’s little to complain about here.

Even though the Tomb Raider: Definitive Edition featured beefed up, next-gen visuals, Rise of the Tomb Raider is clearly a step above. In-game action flows seamlessly into cut scenes, which is a testament to the game’s visual quality. There is a sense of sameness to the locations relative to the last game — snow, jungle, desert — but it never detracts from the beauty or level design.

Character models, led by Lara, are excellent, and there are a lot of little touches in the way Lara moves and interacts with the environment that crank up the immersion level. While it does seem kind of silly to watch Lara get shot repeatedly and keep going, only to then look completely wounded by a fall as part of a scripted sequence, it’s hardly unique to this game.

Voice acting is very good, once again led by Camilla Ludington as Lara. There’s a strong script in place, which hits on a lot of different areas and relationships, and the supporting characters do well in their roles. Our only minor quip is that it’s strange for Lara to be neck-deep in action and then calmly narrate the origins of some artifact she comes across. Both the music and sound effects are well done.

Set after the events of the reboot, Rise of the Tomb Raider finds Lara determined to salvage the legacy of her father, who was discredited for his belief in an artifact that grants immortality. Her obsessions have not gone unnoticed, however, and she now finds herself in the crosshairs of Trinity, a mysterious group pursuing said object as well.

A trip to Syria puts Lara on the trail of the object and sends her off to Siberia, where she believes the ancient city of Kitezh to be located. Once there she’ll need to enlist the help of the locals and once again straddle the line between the known world and the supernatural to acquire what she seeks.

It’s surprisingly similar to the last story, and its close association with Tomb Raider is the game’s biggest disappointment. Granted, you don’t want to wander too far from what works, but Lara more or less unlocks the same skills in the same ways. The pacing is very similar as well, particularly in Rise’s latter stages when the supernatural elements become more prominent. Although it’s still loads of fun to play, the sense of déjà vu is unmistakable at times.

That’s not to suggest the game doesn’t have any new tricks. Optional missions to assist local resistance fighters are available, and the game’s challenge tombs — still the purest nod to the series’ roots — now reward you with additional abilities (like more powerful flaming arrows or increased climbing speed) that make them more worthwhile than ever. Coins scattered about can be used to purchase new guns, outfits and accessories from an in-game black market.

Plenty of other good stuff has been carried forward. Areas are still large, open and ripe for exploring as you try to track down survival packs, documents and unique artifacts for XP/item bonuses. Hunting wild animals remains necessary, assuming you want to upgrade the carrying capacity of miscellaneous ammo types and crafting materials. Like an Assassin’s Creed or Far Cry title, there’s a ton of secondary stuff to do, making it easy to spend hours away from the main story.

Easily the biggest change is the removal of multiplayer. In its place is “Expeditions,” which is essentially a challenge mode in which you replay segments of the campaign for points. Cards, unlocked or purchased, can be used as modifiers to alter the difficulty and many other factors — the harder you make it for yourself the higher your score multiplier. It’s decent, but it’s ultimately repackaged content.

Rise of the Tomb Raider takes the momentum that began with the reboot and continues it with another strong mixture of exploration and action. While it might’ve been nice to see Lara be a little more seasoned after her previous adventure, the series remains headed in a very positive direction.