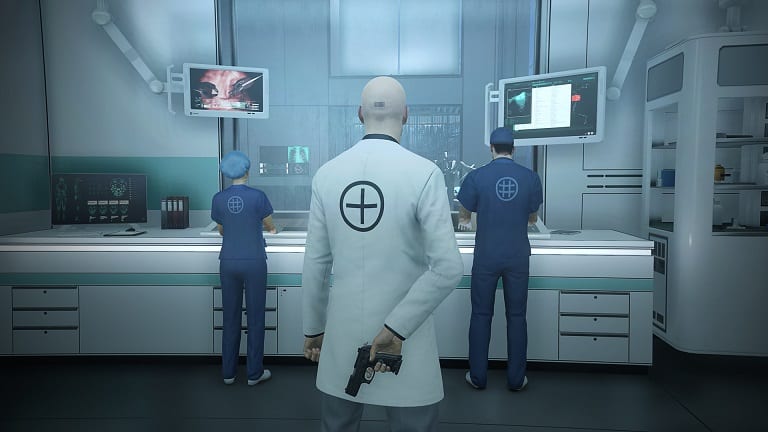 Dr. 47 is here to administer your shot…

Dispatched to the state-of-the-art (but not entirely legal) GAMA hospital in Japan under the guise of a patient there for a physical examination, 47 is unable to smuggle anything into the location. That means all items must be procured on site. The facility is also locked down by advanced technology, adding a couple new wrinkles that prevent muscling your way through the hit.

Although it might not look it at first glance, the facility is actually quite large thanks to its multiple levels, and the number of ways to accomplish your mission is impressive. It really feels like Square-Enix put a lot of thought into rolling out some of the more unique options we’ve seen in the series. As a result, Hokkaido is a tougher job than Colorado, even with only half as many targets.

If you don’t do your best work thinking outside the box Hokkaido will be particularly challenging as there’s no really obvious path to follow initially. Several early efforts ran aground when we couldn’t figure out how to reach the mark, even when following the tracked opportunities that felt like they held your hand during earlier missions. This triggered full restarts, something we hadn’t had to resort to in previous episodes.

This feels like a bit of a double-edged sword. While the level is full of possibilities, it’s also easy to miss many of them entirely, or succeed on the first kill only to slam the door shut on any obvious path to the second. Exploration, patience and (eventually) planning are more important here than before, which is befitting its status as the “season finale.” Still, be prepared to watch your best laid plans crumble before ultimately succeeding.

After you do escape you’ll find the term “season finale” to be an apt one, as the post-mission cut scene does not wrap things up in any way. Yes, one leak has been plugged, but the elusive “shadow client” fails to even make an appearance during the episode, all but ensuring we’ll see another season of Hitman sometime in the near future.

Looking back over the entirety of the six-part adventure there were highs and lows in the gameplay that became magnified since each mission was basically asked to stand on its own. Still, it proved to be a viable delivery system for the franchise, even if the storyline was pushed more to the back burner than we would’ve liked.

Hitman winds to a close with Episode 6: Hokkaido, which sits 1A/1B with Sapienza and does a good job of closing the season on a high note after it sagged a bit in the middle. If you were waiting for the green light on the full season before buying, feel free to take the plunge.