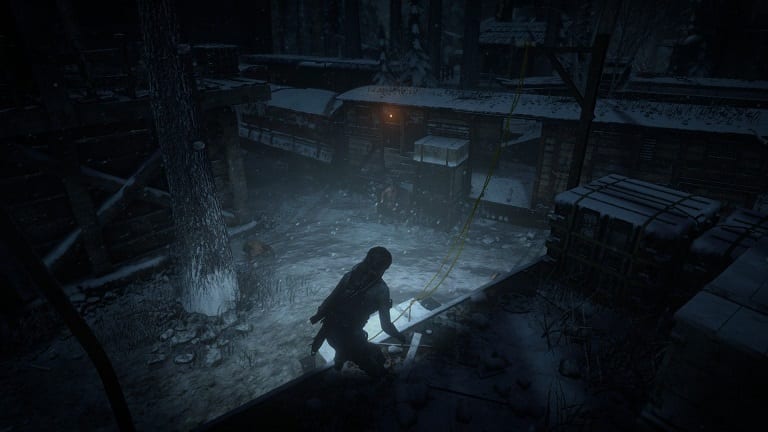 This DLC contains both cold and darkness.

Coming off the short but enjoyable Baba Yaga – The Temple of the Witch add-on, Rise of the Tomb Raider is bringing a fresh helping of DLC to fans with Cold Darkness Awakened. While it’s not quite a full-fledged dive into the ever-popular world of zombies, Lara Croft needn’t squint too hard to see it from there.

There’s a bit of a back story in place. A former Soviet weapons research facility thought to be abandoned has seen one of its experiments leak out, turning soldiers into pseudo zombies, and now Lara must shut down the machines before the toxin spreads with catastrophic results. It is not an extension of the fiction, however, existing instead as a contained piece of the Expeditions mode.

Taking them out when they’re oblivious to your presence is straightforward enough — use your knife in close or put the shaft of an arrow through their head at range — but if they sniff you out and begin to swarm it becomes problematic in a hurry. That’s due in no small part to the fact that Rise wasn’t built to be a run-and-gun experience, and it suffers when pushed into that role.

You can increase your odds of survival by tracking down weapon caches (the shotgun is by far the most effective tool you’ll have against the infected), but it’s still advisable to avoid or isolate foes when possible. In terms of other side activities there are prisoners to rescue as well, though they don’t really offer much incentive to go out of your way to track them down.

Deactivating the towers is probably the most interesting bit thanks to the frantic instructions being supplied by Nadia, who’s hovering overhead in a helicopter. She’ll offer what’s essentially a codex, saying if the conditions of “X” are met, do “Y,” and if they’re not met, do “Z.” It forces you to spend some time exploring the towers and adds some risk as an incorrect choice will sound an alarm, which more often than not means your demise.

It all leads to a formulaic but still intense final section in which Lara needs to destroy a machine while holding off waves of the infected soldiers. The entire scenario can be cleared in as little as 30 minutes or considerably more depending on how much you explore or how much trouble you encounter. Either way, there isn’t a ton of content offered here for the price (US$9.99).

Cold Darkness Awakened is our favourite piece of Expeditions content, providing a different take on Rise’s gameplay, but if you’ve already moved on from the game it’s debatable if this will entice you to return.

By HC Green
Tags: Baba Yaga The Temple of the Witch, Cold Darkness Awakened, Definitive Edition, Lara Croft, Nadia, Rise of the Tomb Raider, Tomb Raider, Video Game Review
This entry was posted on Thursday, April 7th, 2016 at 2:43 am and is filed under Herija Green, Video Game Reviews. You can follow any responses to this entry through the RSS 2.0 feed. Both comments and pings are currently closed.