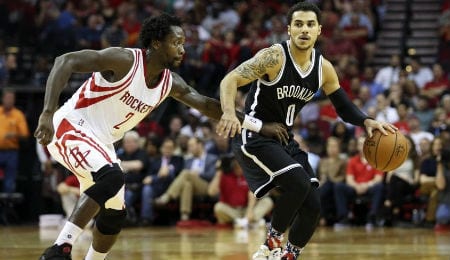 Shane Larkin (right) has been excelling even when opponents are grabbing his junk. (Troy Taormina-USA Today Sports)

This week, Kobe Bryant — The Black Mamba, the legend, and the self-claimed sucky basketball player (this season anyways) — announced his retirement in a heartfelt letter; James Harden starred in his first Adidas commercial since signing a $200 million deal (go see it… especially if you’re a Harden hater because it’s addressed to you); and the 76ers got their first win of the season (1-19) while the Warriors still have yet to suffer their first loss (20-0).

Unparalleled history is being made in the Golden State. So how about some waiver wire recommendations that might make your team as good as the Warriors?

Isaiah Canaan, PG, Philadelphia 76ers (ESPN: 21.4 per cent; CBS: 46 per cent): Canaan has now scored double-digits in his last seven contests, with a special 12 points in a win against the Lakers Tuesday (finally, right?). If you don’t find his consistency special, perhaps you might like his high volume of three-point attempts (over the last several games) knocking down at least three per contest. With Tony Wroten still out and T.J. McDonnell playing underneath him, Canaan looks to keep firing from beyond the arc, and he might occasionally add a bonus of a couple rebounds, assists and steals on top of the treys.

Shane Larkin, PG, Brooklyn Nets (ESPN: 3.5 per cent; CBS: 10 per cent): Last January we last recommended young Larkin, a player that’s had trouble finding a long-term home, but was very excited to join the Nets (see video below). He has seen sporadic bumps and decreases in minutes this season, but the kid can play ball. Larkin stuffed the stat sheet against Phoenix on Tuesday, doing a bit of everything: 11 points, five rebounds, eight assists, two steals and even a block. It seems like the Nets are giving the youngsters a chance to show what they’ve got. As Brooklyn seems to move forward with smaller lineups, you should give Larkin a look in deep leagues as he attempts to develop into an all-around production guard.

Matt Barnes, SF, Memphis Grizzlies (ESPN: 9.8 per cent; CBS: 19 per cent): Apart from in Friday’s loss to the fundamentally-sound Spurs, Barnes has shown consistency dropping double-digits during a seven game stretch. Even with him heading back to the bench with the return of Zach Randolph, Barnes’s consistency hasn’t really been hindered. Barnes contributed in every main stat category Sunday and he’s capable of doing a little bit of everything on a good night. In deeper league formats, his double-digit scoring could give your team a steady boost in points during your weekly matchup.

Donatas Motiejunas, PF, Houston Rockets (ESPN: 6 per cent; CBS: 13 per cent): Montiejunas has yet to play this season because of his back, but he’s very close to returning. He’s been practicing this week and his status for Saturday has been upgraded to questionable. The Young Lithuanian enjoyed a breakout last season, upping his game offensively while doing a better job on the defensive glass and pitching in with more blocks. In a deep league, stash this dude now.

Alex Len, Phoenix Suns (ESPN: 6.3 per cent CBS: 33 per cent): Len might not have put up the most jaw-dropping numbers in his last few contests, but his 33 per cent ownership on CBS sports implies people are starting to notice his potential. He did rack up a double-double Tuesday against Brooklyn, and could definitely Len-d your team in a very deep league a hand (see what we just did?) with points and rebounds as he tries to to take advantage of Tyson Chandler’s sporadic absences.

Ian Mahinmi, Indiana Pacers (ESPN: 22.7 per cent; CBS: 44 per cent): Our first repeat pick of the season, Mahinmi’s ownership rates have risen, yet he’s still available despite consistently flirting with double-doubles (and pulling the trick on Thursday). He’s seeing a bit more PT lately and has averaged nearly 11 points, over nine boards and 1.4 blocks per game over the last five. We’re not sure how those kind of numbers wouldn’t help more teams.

You’re up now. Let us know who stood out as your favourite Fantasy waiver wire pick of the week in the comments below.

By Adrian Wallace
Tags: Adidas, Doug McDermott, fantasy basketball, Golden State Warriors, Isaiah Canaan, James Harden, Kobe Bryant, Matt Barnes, NBA, Philadelphia 76ers
This entry was posted on Saturday, December 5th, 2015 at 5:23 pm and is filed under Adrian Wallace, BASKETBALL, The Wire Troll. You can follow any responses to this entry through the RSS 2.0 feed. Both comments and pings are currently closed.