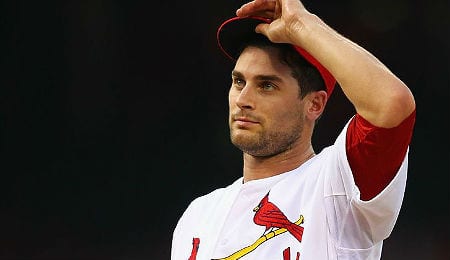 September is here, which means the finish line is within sight. We are here to help, with another edition of The Wire Troll to help you get through some rough patches.

Tyler Lyons, SP, St. Louis Cardinals (ESPN: 0.4 per cent owned; CBS: 1 per cent owned): Lyons was a June recommendation, and he certainly pitched solidly in a couple of starts that month. He’s going to get a few more cracks to impress down the stretch as the Cardinals closely monitor the workload of some of their young starters. Lyons flashed a sweet curve in his spot start on Wednesday (see video below), so consider him as a deeper NL-only league option.

Darnell Sweeney, OF/2B/SS, Philadelphia Phillies (ESPN: 0.5 per cent; CBS: 2 per cent): Sweeney, part of the return from the Chase Utley deal, has shown some flashes and is going to get ample opportunity for the floundering Phils. With an OPS of 884 through his first 15 big league games, he bears scrutiny. Sweeney is 0-for-2 on the basepaths so far, but he swiped 32 bags in 116 games at Triple-A, so could be a very nice source of speed.

Josh Tomlin, SP, Cleveland Indians (ESPN: 33.3 per cent; CBS: 36 per cent): ESPN owners are taking note of Tomlin’s recent success, as he has gone from 10.7 to 33.3 per cent in just a week. Tomlin’s last two starts have been phenomenal, including a complete-game victory on Friday at Detroit.

Blake Swihart, C, Boston Red Sox (ESPN: 18.4 per cent; CBS: 34 per cent): Welcome back to the Troll, Mr. Swihart. We recommended him when he first got the call in May, and he struggled to hit for average that month before flashing more extra-base pop in June. A foot injury derailed what was shaping up as a promising July, but Swihart returned and picked up his play even more, scoring 15 runs in just 17 August games. With a month left, he wants to secure the catcher’s job long-term in Beantown and has been hitting at a torrid pace of late (three multi-hit efforts in the last four games), even if his power hasn’t developed yet.

Joe Kelly, SP, Boston Red Sox (ESPN: 30.1 per cent; CBS: 44 per cent): All of a sudden, Kelly has found it. He has won seven straight starts, and most importantly is cutting down on his walks.

Carl Crawford, OF, Los Angeles Dodgers (ESPN: 5.9 per cent; CBS: 12 per cent): Healthy (for now), Crawford is picking it up at the plate, and is always a viable threat to provide your Fantasy team with stolen bases.

Hector Olivera, 3B, Atlanta Braves (ESPN: 13.1 per cent; CBS: 39 per cent): Olivera has gotten off to a bit of a slow start for the free-falling Bravos, but he has plenty of potential and will get ample time to show his skills down the stretch.

Ivan Nova, SP, New York Yankees (ESPN: 17.6 per cent; CBS: 40 per cent): Nova got cuffed around pretty hard in August, but he’s managed to stem the bleeding with back-to-back quality starts. Not surprisingly, his control hasn’t been as sharp in the wake of Tommy John surgery, but it’s a good sign that his K rate is up a bit, although it’s still a far cry from where it was in 2012-2013.

Eduardo Escobar, SS/OF, Minnesota Twins (ESPN: 41.3 per cent; CBS: 27 per cent): Escobar had a homer and two RBI on Sunday, continuing a hot streak that’s now about three weeks old. Since August 18, his BA has risen 25 points as he’s taken over as the starting shortstop for the Twinkies.

Jon Jay, OF, St. Louis Cardinals (ESPN: 1 per cent; CBS: 3 per cent): Jay (wrist) came off the DL on Friday, scored a run Saturday and delivered a hit on Sunday. That wrist has been an issue all year, hence his crappy results. If Jay is truly healthy now, keep an eye on him in deeper NL-only leagues.

Tyler Duffey, SP, Minnesota Twins (ESPN: 5.5 per cent; CBS: 16 per cent): Duffey has a hell of a curveball and he rode it on Sunday en route to his finest start in three weeks, matching his career high with eight strikeouts. If the 24-year-old righty maintains the kind of command he showed in this outing, he will quickly become a major Fantasy asset.

By Michael Seff
Tags: Darnell Sweeney, National League, Philadelphia Phillies, St. Louis Cardinals, Tyler Lyons
This entry was posted on Sunday, September 6th, 2015 at 11:24 pm and is filed under BASEBALL, Michael Seff, The Wire Troll. You can follow any responses to this entry through the RSS 2.0 feed. Both comments and pings are currently closed.