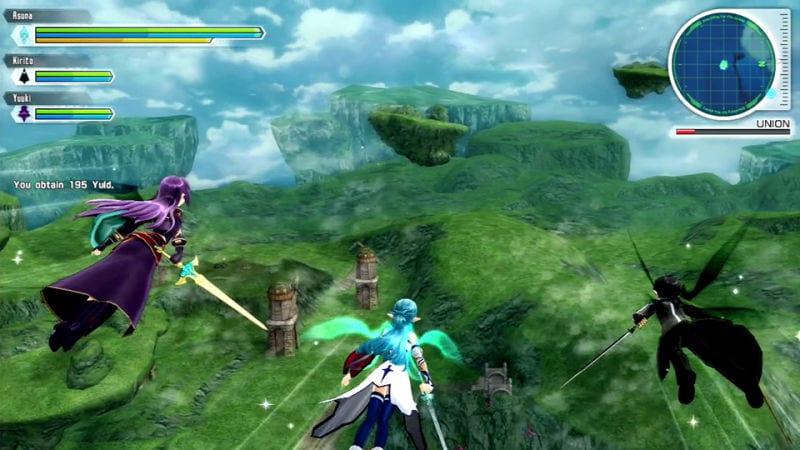 Second star to the right and straight on til morning.

For the uninitiated, Sword Art Online is an anime based on a fictional MMO designed to draw the user in completely by means of real-time brain integration (think Matrix plugs). Due an unforeseen bug in the system, the first 10,000 users were unable to log out and became trapped until they could beat the game.

Our protagonist, Kirito, was able to achieve this, escape back to reality and then start playing another game just like it called ALfheim Online (ALO for short). Lost Song refers to itself as an “expansion pack” to the anime, allowing us to explore bits of ALO in brand new ways.

Whether you are exploring via flight or fighting on the ground, the controls are pretty easy to get used to. There are normal and strong attacks to blend together, and a dodge that is all too important.

Being that you are playing inside of ALO, you can activate your flight mode at any time by pressing up on the d-pad to take to the skies, or pressing left to initiate a hovering mode. Ascension and descent while in hover mode is pretty clumsy, as you don’t hold a button to descend, you actually have to double-tap the button and then hold it to fly downward.

Sword Art Online: Lost Song won’t stun anyone visually. The environments are all pretty flat and lifeless, usually populated with screenfuls of repeating enemy types. While flying around (a great portion of the game), it’s very easy to notice the blurry textures and detail pop-in, but it’s much less prevalent on the ground as you’re carving through baddies.

Character detail is wonderful, however, and the game features some pretty neat combat animations and special effects. The framerate is consistent, even when the screen gets filled to the brim with flying bat-balls or Minotaur bots (as you may have gathered, enemy design leaves a lot to be desired).

Voice work is spectacular, though, as the cast of the show grace the game with the unique personalities that they’ve given to their roles. While out adventuring, the soundtrack can get very, very grindy and repetitive feeling, but it appropriately ramps up during boss battles, which contain some seriously menacing tunes.

From there you’ll have much aimless wandering to do, as you’ll come across several locked doors pretty much across your whole game time. You’ll fly all the way across the map, selecting to avoid enemy confrontation in favour of hopefully “just finding a damn key.” This is rarely the case, however, as doors are generally heavily guarded or shrouded by some sort of puzzle, or just a complete dead end.

There’s little more to do at any point in the game than fly around and look for blurry, mis-coloured patches that could represent a door or something that has to do with a door. The game’s radar doesn’t do much to help, other than putting a small orange blip against a poorly contrasting background.

There are several items to craft as well, but none of it feels necessary. We’d often be able to buy or find a better weapon or power-up faster than I could if I had spent time amassing the materials. The crafting mechanic of the game is also poorly explained and really only serves to slow things down.

A couple key things could’ve really helped this game. First, drop the crafting system completely, put a better coat of paint on it and maybe pick a direction to push the game in a more clear fashion. This is an action RPG that is trying to create the feeling of an MMO, which means the levels are structured like an MMO (vast open areas with mobs wandering around), and it just isn’t fun to jam around in an online game by yourself.

Luckily, there is multiplayer. While you’re at the small hub town, you can enter the Inn and jump right into a Duel with other players (a 4v4 affair) or you can try your best with up to 15 other players to take down boss challenges and quests. The matches are very easy to connect to and felt completely lag-free, too.

With a bit more focus on the action and a bit more love added to the game world, Sword Art Online: Lost Song could have been a smash hit. Also, being that the multiplayer component of the game is often more fun than the single player, are we going to see a CoD-style revolution to the action RPG genre with droning single-player campaigns and awesome multiplayer matches?