It’s time to turn our attention to the Gridiron for the 2014 RotoRob Football Awards. 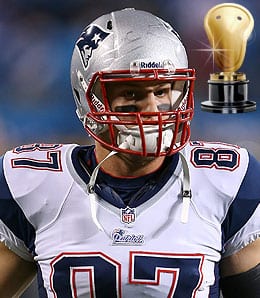 Rob Gronkowski was a rock at a frustrating position. (Bleacherreport.com)

Perhaps no position in Fantasy football was more frustrating to owners in 2014 than tight end. Every single tight end had multiple disappointing weeks this year — except one. Perennially atop preseason boom-or-bust lists because of injury concerns, Rob Gronkowski was finally able to stay healthy and reminded us all that he is the most physically dominant skill position player in the league. Fantasy owners had to love the fact that his worst game came early (32 yards in Week Two) and was followed up by three straight games with an end zone visit. All MVPs need a “signature moment” — Gronk’s came in Week Eight against the Chicago Bears when he amassed 149 yards on nine catches en route to three touchdowns. Through Week 15, he may only have three 100-yard games but he also has scored 11 touchdowns, and we believe his consistency is the biggest reason he is deserving of this award. A five-catch, 68-yard day is a decent line for most tight ends — but that’s Gronk’s second-worst game of the season. All of 2014’s other Fantasy Stud of the Year candidates are not even definitively the best at their position and anyone trying to argue for a tight end other than Gronkowski in 2014 needs to be drug tested. Does Gronkowski deserve to be our Fantasy Stud of the Year? We venture to guess even Marshawn Lynch would say “Yeah.” — NW Michael Floyd did not develop as expected. (Sports-kings.com)

You know that girl in high school that talked to you when she was a junior and you were a sophomore? Then she became a senior and left you and your pimple faced/booger infested friends in the dust. Michael Floyd appeared to be ripe for a superstar graduation. However, he got busted for underage drinking by some crafty defensive coordinators. Hence 2014 holds no diploma. As that disco ball of 2014 prom/NFL season began, we all glistened with reflection on some of Floyd’s finer moments and no one said “let’s see if he can put a whole season together.” Floyd’s numbers were not abysmal (841 yards & six TDs both team leading), it’s not like he is the WR version of Trent Richardson or anything that damning. But, after 1,065 yards in 2013 we thought more was a no brainer. Frankly we all expected he would step on teammate Larry Fitzgerald’s head on his way to being a Top 10 WR. His career is not over but it appears he might have to be held back a year. — JJ In a year of great rookies, Odell Beckham Jr. stood above all. (Giants.com)

Like a blonde tipped Shop-Vac Odell Beckham Jr. was an indefensible force. In a year that saw a dozen or so rookie WRs emerge into Fantasy relevance, he’s the RotoRob Fantasy ROY. Beckham deserves this honour if only for the simple fact that he had more receiving yards than any other rookie wideout — despite missing the first four games of the season. While he couldn’t left the Giants into playoffs (he doesn’t play defense) he did roll up 1,305 yards on 91 receptions with 12 TDs. Along the way, he had seven double digit target games (including three games with at least 15) and four double digit reception games while surpassing the 100 yard mark seven times. We admit when the Giants took him with the 12th overall pick of the first round we were a little shocked. No disrespect to the slightly less stealthy Sammy Watkins and Mike Evans, but Beckham played like he could have been the number one overall pick. Like an aged veteran, Beckham finished 10th overall in receiving yards and tied for fourth in receiving TDs. His hype was enhanced by a gaggle of acrobatic catches that left the league stunned — even Spider-Man himself was left blushing. — JJ In March 2013, after leading his team to a Super Bowl win and being named the game’s MVP, Joe Flacco became the highest paid QB (at the time) in NFL history. Then he promptly went out and defended his crown by throwing 19 TD passes against 22 INTs as Baltimore finished 8-8. The boo-birds were hooting about how Flacco’s massive contract had crippled the Ravens and now he is regressing into obscurity. The haters were loud and loving it, they were writing articles about how to restructure his contract or how Baltimore could opt out of it and/or cut him. Flacco’s career was over! Flash forward to the 2014 season as the Ravens add WR Steve Smith Sr., who is basically making one more stop on the way to the nursing home. The Ray Rice turmoil ensued and — if you recall — the Ravens were going to struggle to a 4-mark 12 without him. Flacco put everything aside and threw a career high 27 TD passes compared to just 12 INTs. His QBR jumped from a mediocre 46.7 (2013) to a league-leading 85.9. Sure, Justin Forsett and an improved O-line that gave up just 19 sacks compared 48 in 2013 helped Flacco’s cause. But once again Flacco was the stock that flavoured the 10-6 soup. He had the Ravens playoff bound and demanding respect again. — JJ

Super Sophomore of the Year The sophomore curse is an often-spouted term that can often be oh so true when it comes to players like Cordarrelle Patterson or Jerome Walton. It seems we get so wrapped up in trying to predict who will be bad that we forget about those that elevate their games in their second seasons. So to keep things positive we give to you the Super Sophomore Award, because second-year players matter too. It’s not often celebrated when a rookie steps up to show the league that he can be even better in Year Two. This doesn’t mean will be giving awards to third and fourth year players; they get rewarded with consecutive All-Pro and Pro Bowl selections if they are so deserving.

You probably thought we invented this award just so we could talk more about our beloved DeAndre Hopkins. After all, he did match his rookie totals just 11 games into 2014. Yet, Le’Veon Bell was too darn smooth to ignore. Hell, he was so good that his backup (LeGarrette Blount) complained about lack of playing time and Pittsburgh promptly Blount. Bell met the injury bug as rookie but he exterminated his way into consistency this season. His multi-dimensional abilities left many PPR owners dancing in the streets with glee. Bell’s 80-plus receptions and over 2,000 all purpose yards should vault him into a high-end first round pick for at least the next three seasons. — JJ

Sleeper of the Year Emmanuel Sanders showed he had another level in his game. (Ron Chenoy-USA Today Sports)

Emmanuel Sanders’ career highs prior to joining the Denver Broncos last offseason were an unexciting 67 catches for 740 yards and six scores. Many observers expected a slight uptick in production for Sanders thanks to the presence of Peyton Manning, but since he also had solid quarterback play in Pittsburgh a ceiling of around 1,000 yards seemed reasonable, even generous. So much for that; Sanders had a huge breakout year in 2014, amassing over 1,200 yards and seven touchdowns, making Denver fans forget all about Eric Decker (87-1,288-11 in 2013) and turning Wes Welker into a complete Fantasy afterthought, with 60 yards or fewer in all but one game (or maybe Manning just wasn’t down with Welker’s “partyboy” nonsense in the offseason). Perhaps the most incredible thing about Sanders’ 2014 numbers is his seven 100-yard games, considering he never had one in his four years in Pittsburgh. He provided Fantasy owners WR1 value at the average cost of a seventh-round pick, easily making him our Fantasy Sleeper of the Year. — NW When Seattle marched to the Super Bowl last year, Seahawk mania gripped Em City in its clutches, and no creature — however small — escaped. In fact, one of the hermit crabs at the Seattle Aquarium was renamed in honour of star running back Marshawn Lynch, taking on the perfect moniker — Marshawn Pinch. Better yet, the crustacean swapped out his shell for a mini Seattle Seahawks helmet instead. Riding that good luck charm, Seattle went on to win it all. — RR Hey, Eli, is that your real jock? (en.wikipedia.org)

New York Giants quarterback Eli Manning got in hot water last year in an ongoing lawsuit that claims that he and the team passed off jerseys and helmets as “game worn” and the fact that they weren’t ever used in a game had an extremely negative impact on a particular dealer’s reputation. But here’s the real issue: would you really pay more for a Manning jersey that he had worn to throw three picks vs. one that he had never soiled with his ineptitude? — RR Terrell Davis either loves or is terrified of earthquakes. (Profootballtalk.nbcsports.com)

In mid-March, during an NFL broadcast, a 4.4 earthquake struck very close to the studio where they were filming. Former running back great Terrell Davis’ reaction is priceless as he immediately bolts out of his seat and then has the most spectacular WTF look on his face for several seconds. Is that a 400-pound linebacker trying to chase me down? — RR

Classy Move of the Year After the Carolina Panthers released their all-time leading receiver Steve Smith in March, a Panther fan posted a video on YouTube (see below) of him trying to explain to his seven-year-old son why Smith wasn’t on the team anymore. The video, in which the young boy got very emotional and broke down in tears upon hearing the news, went viral. Smith saw it, and decided to surprise the boy, bringing him onto ABC’s Good Morning America and presenting him with a jersey of his new team, the Baltimore Ravens. What a classy move by Smith to help turn that distraught young fan back into a happy camper. — RR The Raiders moved back to Oakland from Los Angeles in 1995, but that didn’t stop referee Ed Hochuli from calling them the Los Angeles Raiders in the pre-game coin toss before the team’s final preseason game against Seattle. Um, ya. About that, Ed. Hochuli has been a ref for a quarter century now, and will turn 65 later this year, so we suppose he’s entitled to a senior’s moment — even if it did happen on national TV. Still, he’s also a lawyer, so maybe he’s working on a deal to bring the Raiders — or really any freaking team — to the second biggest media market in North America. The fact that LA is still without a team is the biggest blight on the NFL, and while that doesn’t excuse Hochuli from flashing back two decades, it’s still a situation that needs to be addressed. — RR

Pizza Injury of the Year As long-time RotoRob readers are no doubt aware, we try to constantly monitor the growing phenomenon of pizza-related injuries in football. In our 2013 Awards, it was Nate Burleson that succumbed to the dangerous temptation of pizza, and paid a steep price. For 2014, that distinction goes to Washington Redskins cornerback DeAngelo Hall. In late-October, while recovering from surgery to his Achilles’ tendon, he heard the siren song of the pizza, calling him for a midnight snack. Sure enough, en route to sate his late-night craving for pizza, he slipped in his kitchen, once again tearing his Achilles’ tendon and necessitating a second surgery. Can we finally admit that pizza is as dangerous as it is delicious? — RR

Now it’s your turn. Which awards did we get wrong and which ones hit the mark? Let us know in the comments below.

By Josh Johnson
Tags: Andrew Luck, Chicago Bears, Indianapolis Colts, Marshawn Lynch, Rob Gronkowski
This entry was posted on Monday, January 19th, 2015 at 12:01 pm and is filed under FOOTBALL, Josh Johnson, Nick Wagner, RotoRob, RotoRob Awards. You can follow any responses to this entry through the RSS 2.0 feed. Both comments and pings are currently closed.

One Response to “2014 RotoRob Football Awards”