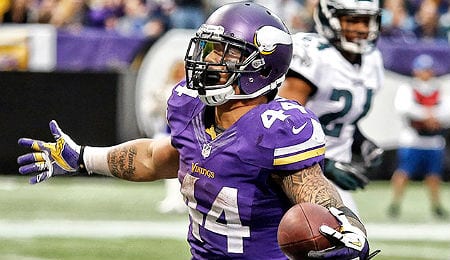 Matt Asiata has emerged as a serviceable runner. (USATSI)

As we enter into our first week of byes, it is now time to see what your bench is made of. This is the time of year when trades start to become a possibility and deciding who to start becomes a little more difficult. Luckily for you, Team RotoRob is on the job. Here are you Week Four Start ’em, Sit ’em picks.

Philip Rivers, QB, San Diego Chargers vs. JAC: Rivers is always a tough one to nail down — you can never really be sure what you’re going to get. But with the recent backslide of the Jags, this should be as about as close to a lock as you will get this week. We advised sitting him in Week Two against Seattle, and then he went out and racked up 284 yards and three TDs without a pick. Oops. Well, we’re not underestimating Rivers again.

Colin Kaepernick, QB, San Francisco 49ers vs. PHI: Staying on the west coast quarterback theme, we have another Jekyll and Hyde player on our hands in Kaepernick. We picked him as a bust this year, and so far — despite some improved passing — he’s regressed. Normally, Kaep would only be a QB2 for us, but being at home and going against the Eagles (who seem dead set on losing the first half of every game), this may be when we see the good side of the 49ers QB. Kaepernick needs to step up this week to answer his growing number of critics after allegedly using the N-word last week, although Coach Jim Harbaugh sort of defended his man this week (see video below).

Jeremy Maclin, WR, Philadelphia Eagles @ SF: If there is one good thing about being down big at the half of every game (at least for Fantasy football purposes), it’s having to throw your way back into it and we suspect this one will be a shootout. So start Maclin.

Matt Asiata, RB, Minnesota Vikings vs. ATL: Asiata by no means would be our first start, but if you’re in need of a serviceable runner you should look here. On Sunday, Teddy Bridgewater will be taking the reins. While normally that would give us pause, but when starting a young QB there are two things you just have to do — run the ball, and check down. Asiata should be the beneficiary of both options.

Ryan Fitzpatrick, QB, Houston Texans vs. BUF: In most cases, we always go with scorned players facing former teams, but in this case it’s a quarterback with limited arm strength and a nervous twitch when under pressure going against one of the best fronts in the game. Yeah, we say give Fitzpatrick the night off.

Cam Newton, QB, Carolina Panthers vs. BAL: We should be upfront by saying that a sizable part of the reason why we are benching Newton is because of his post game capris (Joan Rivers would have had a field day… RIP), but beyond his fashion faux pas he is still recovering from an offseason rib injury which has confined him to the pocket. And for our money, a one dimensional Newton is one we’ll sit.

Greg Olsen, TE, Carolina Panthers vs. BAL: For those that can’t bare to take a tight end in the first few rounds of a draft, Olsen has been a Godsend — he always produces and is always under the radar. This week, however, his presence will not be lost on a Ravens defense that preys on tight ends. Now, we’re not suggesting that you drop him of course, but if you happen to be one of those folks that carries two tight ends you may want to go the other way.

Now it’s your turn. Let us know in the comments below who you are sitting and who you are starting this week.

By Vaney Hariri
Tags: Philip Rivers
This entry was posted on Wednesday, September 24th, 2014 at 11:36 pm and is filed under FOOTBALL, Start 'em Sit 'em, Vaney Hariri. You can follow any responses to this entry through the RSS 2.0 feed. Both comments and pings are currently closed.