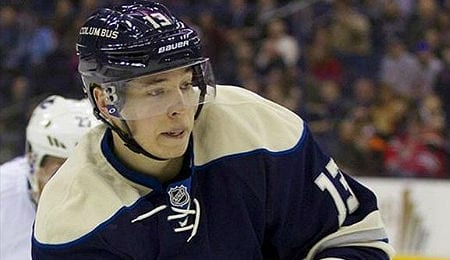 Cam Atkinson is on fire for the Blue Jackets. (Jason Mowry/Icon SMI)

It’s no doubt do or die time in your Fantasy league, and for those of you in the finals or battling for third place, you’re looking for that special player to put your team over the top. Hopefully the following players can do the trick.

Cam Atkinson, RW, Columbus Blue Jackets (ESPN: 15.3 per cent; CBS: 36 per cent): Atkinson has been on fire recently with the Jackets, scoring four goals (see video below), seven points, a plus-6 rating, a shorthanded point, nine shots on goal, two hits and two blocks in the past week. He has 20 goals, 37 points and a minus-2 rating this season, and his stellar performances lately indicate he’s only looking to add to his totals before the season comes to a close. Atkinson has seven goals, 12 points, a plus-6 rating and 31 shots on goal in his last 12 games.

Kyle Quincey, D, Detroit Red Wings (ESPN: 0.6 per cent; CBS: 5 per cent): Quincey is coming off a solid Week 24 with four assists, a plus-6 rating, 12 penalty minutes, five shots on goal, six hits and four blocked shots. With Dougie Hamilton, Shea Weber and others on the shelf, Quincey could be a great last second pick up for your team.

Brian Gionta, RW, Buffalo Sabres (ESPN: 3.3 per cent; CBS: 5 per cent): The Sabres may be in full “McEichel Mode,” but don’t tell Gionta that. An experienced NHL captain, he’s not one to give up and quit, and his performance last week proves it: in three games, Gionta had three goals, four points, a minus-3 rating, three power play points, 18 shots on goal, eight face-offs won, three hits and four blocked shots.

Aleksander Barkov, C, Florida Panthers (ESPN: 6.5 per cent; CBS: 32 per cent): With seven games to go, the Panthers are still four points back of Boston for the second wild card spot in the East. They’ll get there if Barkov has anything to say about it. The 2013 second overall pick had two goals, five points, a plus-2 rating, two penalty minutes, a power play point, nine shots on goal, 25 face-off wins and three blocked shots in three games last week. He has 14 goals, 31 points and a minus-2 rating in 64 games this season.

No. 3. Devan Dubnyk, G, Minnesota Wild: Dubnyk has started 35 straight games between Minnesota (34) and Arizona (one), and he’s been spectacular. In Week 24, “Duuuuuuuubnyk” had four wins, a 1.23 goals against average and a .962 save percentage. He has 35 wins, a 2.05 goals against average, a .930 save percentage and six shutouts this season. The hulking 6’6″ behemoth is 26-6-1 since coming to Minnesota. Just give Dubnyk the Hart Trophy now.

No. 1. John Gibson, G, Anaheim Ducks: The Ducks have got the train back on the track, but not because of the youngster Gibson. He was winless with eight goals against for a 4.41 goals against average and an .833 save percentage in two appearances.

No. 2. Jimmy Howard, G, Detroit Red Wings: Howard has been mediocre the last half of the season and continued it through Week 24… to the detriment of our Fantasy team. He had one win, a 3.76 goals against average and an .839 save percentage.

And that’s it for this final regular season session of the Troll. Best of luck, and here’s hoping you’re lifting a trophy this time next week! Have a favourite Fantasy hockey waiver wire pick of the week? Let us know in the comments below.

By Dakota Case
Tags: Fantasy Hockey
This entry was posted on Monday, March 30th, 2015 at 1:45 pm and is filed under Dakota Case, HOCKEY, The Wire Troll. You can follow any responses to this entry through the RSS 2.0 feed. Both comments and pings are currently closed.