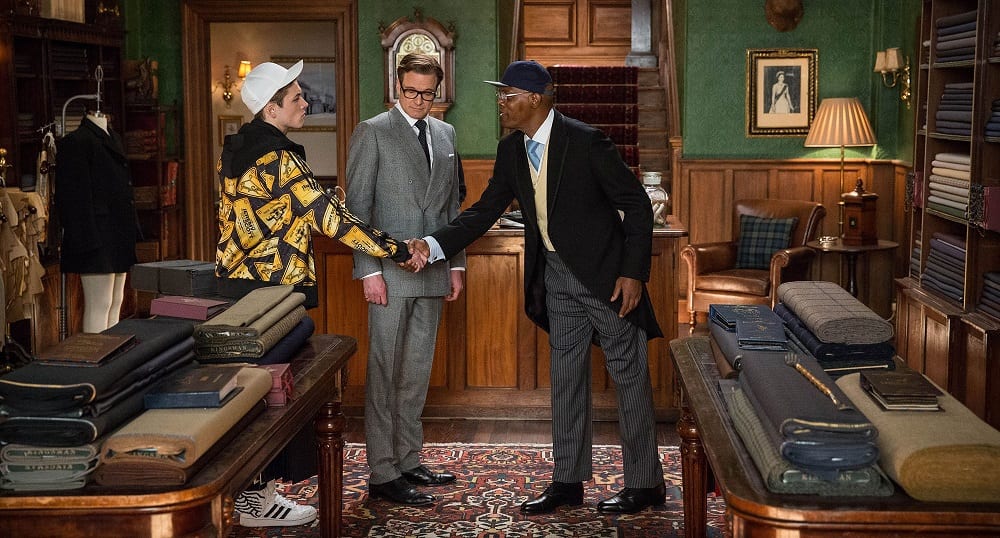 Director Matthew Vaughn may not be a household name, but the 44-year-old has compiled a rather impressive résumé — albeit one that’s lacking in quantity. He helmed the criminally underrated Stardust, revived the X-Men franchise with First Class and blended dark comedy with bloody violence in Kick-Ass. Now he’s looking to mix those same elements with Kingsman: The Secret Service, a film that takes the debonair nature of British spy flicks and injects some insane action.

There’s a secret society of spies operating in England, one not bound by the government oversight and bureaucratic red tape that undermines more official agencies (MI6, Mossad, CIA). These highly trained agents do their work in secrecy, adopting names from the Knights of the Round Table (Arthur, Merlin, Galahad, etc.) and keeping their ranks very small. When one of their own is killed, however, each surviving agent must nominate a successor.

It’s here that the film divides the narrative, focusing some of its energy on the class of would-be Kingsmen and their trials and tribulations, and the rest on the investigation into the agent’s murder. At the head of both is Galahad (Colin Firth), who’s own nominee, Eggsy (Taron Egerton), is the son of another former Kingsman that was killed on Galahad’s watch. While Eggsy tries to earn a spot through a series of tests, Galahad works on unraveling the particulars of Lancelot’s death.

All roads lead to a confrontation with Richmond Valentine (Samuel L. Jackson), who is hatching a plot to solve the planet’s climate troubles in a most unconventional way. There’s plenty of over-the-top action along the way, gadgets that’d make Q jealous and no shortage of stylized death and dismemberment. In short: everything a good action movie needs.

Like John Wick, Kingsman pushes the envelope with its stylized violence, mixing hand-to-hand combat with a generous helping of “gun fu.” The fight scenes are balls-out insane in the best possible way, highlighted by the absurdity that is the church massacre, which contains a nearly endless stream of countermoves and slick kills that leaves dozens of bodies in its wake. It’s played to such a ridiculous degree, however, that is never feels disturbing.

Jackson appears to be having fun as the lead villain with a wardrobe that seems to be channeling his inner Spike Lee. Firth, better known for dramatic roles, including an Oscar-winning performance in The King’s Speech, does a good job portraying the physical malice of a trained assassin with the concern of one that owes a great debt to his departed co-worker’s son. Mark Strong is crisp as Merlin, the trainer/tech, and Egerton is generally likeable as Eggsy.

Pacing and editing are also high points for Kingsman as the film manages to both tell an interesting story and develop personal connections while still attaching lots of action — not to mention some tongue-in-cheek and/or self-referential humour to the lineage of spy movies.

If you’re an action junkie, there’s not a ton to complain about. That being said, there were a few moments that we didn’t like. One was the imagery of the Eggsy’s mother trying to hack down a locked door with a cleaver to get after her young daughter, who’s left to scream and cry in her stroller. It felt really harsh, especially when nearly every other act of violence is done with a wink and a nod. The whole Pomp and Circumstance scene even goes too far in that direction, creating something downright goofy.

Outside of those tonal missteps, Kingsman is quite clever in executing its vision. It’s unfortunate, though, that both those moments (and a few others) all come near the end of the film, allowing the late stages to come across relatively flat. Oh, and killer prosthetic legs? Kinda dumb.

We love a good action flick, and despite some unevenness in the film’s final act, Kingsman: The Secret Service delivers all kinds of delicious moments. See it.

By HC Green
Tags: Blue-ray reviews, Colin Firth, Kingsman The Secret Service, Samuel L Jackson
This entry was posted on Tuesday, June 2nd, 2015 at 12:38 am and is filed under Herija Green, Movie Reviews. You can follow any responses to this entry through the RSS 2.0 feed. Both comments and pings are currently closed.