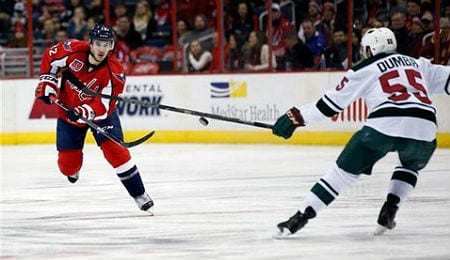 Curtis Glencross (left) sure got the fresh start he needed in Washington. (Newsobserver.com)

Kris Russell, D, Calgary Flames (ESPN: 16.8 per cent; CBS: 36 per cent): Are you looking for that reliable veteran defenseman to put your team over the top? Well, you’re certainly not alone as that was the case with nearly every NHL GM at last week’s trade deadline. With a goal, 23 points, a plus-9 rating and a surprisingly good Calgary Flames team in his corner, Russell could easily be the waiver wire steal of the week in your league. We recommended him back in late-October, but for some reason he hasn’t really gained much Fantasy traction since then, so we’re back for another pimping session.

When consider that Calgary’s top defenseman, Mark Giordano, is out for the remainder of the season with a torn biceps tendon, Russell’s stock couldn’t go any higher, but his average nightly ice-time of 23:02 certainly will. In three appearance last week, Russell had three assists, a minus-1 rating, two penalty minutes, three power play points, nine shots on goal, five hits and an astounding 26 shots on goal while averaging 29:10 of ice-time over that span. Wow.

Curtis Glencross, LW, Washington Capitals (ESPN: 9.9 per cent; CBS: 40 per cent): Glencross was looking for a fresh start and he got one in Washington. In three games last week, he had two goals, four points, two power play points, seven shots on goal, seven hits and two blocks. We slotted Glencross inside the top 40 in our Left Wing Rankings heading into the season, but he was struggling to rediscover the form that allowed him to score a combined 50 goals in 2010-11 and ’11-12. However, he sure has picked things up since the trade to the U.S. capital (see video below). Overall, he has 11 goals, 32 points and a plus-3 rating in 56 games played between the Flames and Caps.

Alex Killorn, C/LW, Tampa Bay Lightning (ESPN: 6 per cent; CBS: 31 per cent): If Killorn isn’t owned in your league, he probably should be. Through 59 games this season, he has 14 goals, 35 points and a plus-8 rating. Last week, Killorn had two goals, four points, a plus-1 rating, a power play point, nine shots on goal, four face-offs won, five hits and two blocked shots.

Jason Chimera, LW, Washington Capitals (ESPN: 0.3 per cent; CBS: 2 per cent): Chimera isn’t a good option in leagues with six to 10 teams, but he could be a dark horse candidate on the wires of leagues with 12 teams or more, and those that track statistical categories like hits and penalty minutes. In Week 21, he had two assists, a plus-1 rating, 16 penalty minutes, 11 shots on goal, a face-off won, seven hits and a blocked shot. He has five goals, 16 points and 49 penalty minutes in 62 games played this season.

No. 1. Alex Ovechkin, LW/RW, Washington Capitals: “Alex the Great” has been just that this season, and continued to prove why with five goals, seven points, a plus-3 rating, three power play points, two game-winning goals, 22 shots on goal, five hits and a block.

No. 2. Semyon Varlamov, G, Colorado Avalanche: After making our duds list last week, Varlamov was nearly flawless with two wins, a 0.50 goals against average, a .986 save percentage and one shutout.

No. 3. Evgeni Malkin, C/RW, Pittsburgh Penguins: The man drafted the very next pick after Ovi in the 2004 draft has also had an outstanding career, and a similar week with four goals, six points, a plus-2 rating, two power play points, 13 shots on goal and 16 face-offs won.

No. 1. Curtis McElhinney, G, Columbus Blue Jackets: With Sergei Bobrovsky back in the lineup, McElhinney will revert to backup status, which is good, because his zero wins, 6.03 goals against average and .849 save percentage in two appearances were just awful.

No. 2. Colin McDonald, RW, New York Islanders: McDonald has never been a scorer, so his performance in Week 21 isn’t all that surprising. He was scoreless with a minus-4 rating, 10 hits and two blocked shots.

No. 3. Pekka Rinne, G, Nashville Predators: Rinne has struggled since a 4-2 loss to Minnesota back on February 26. He’s allowed 16 goals in five games of Nashville’s current six-game losing streak. Like his team, Rinne will bounce back soon enough, but he’s certainly lost ground in the Vezina race. In three appearances last week, the big Finn was winless with nine goals against for a 3.13 goals against average and a .900 save percentage.

And that’s it for our coverage this week. How did you do? Tell us in the comments section below.

By Dakota Case
Tags: Kris Russell
This entry was posted on Sunday, March 8th, 2015 at 5:08 pm and is filed under Dakota Case, HOCKEY, The Wire Troll. You can follow any responses to this entry through the RSS 2.0 feed. Both comments and pings are currently closed.