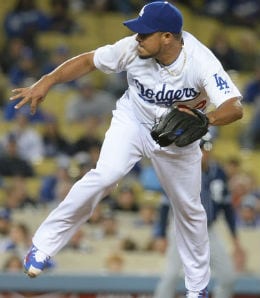 Joel Peralta has held down the fort for the Dodgers. (Jayne Kamin-Oncea-USA Today Sports)

Welcome back to another week of Fantasy baseball. The Kris Bryant era has begun at Wrigley; Giancarlo Stanton is trying to get his limp Fish swimming; and Greg Holland — one of the few dependable closers out there right now — has landed on the DL with a pec strain.

Joel Peralta, RP, Los Angeles Dodgers (ESPN: 49.8 per cent; CBS: 38 per cent): We slotted Peralta 39th in our Relief Pitcher Rankings based on the idea that he had a good chance to close early on for the Dodgers while Kenley Jansen healed. So far, Peralta has pitched at a top 10 reliever level, so you need to jump on him pronto! He’s provided a veteran presence in a young bullpen and while he dealt with neck stiffness last week, he looked fine Saturday with a hitless frame for the save. Peralta is now 3-for-3 in the saves department (see video below) and has a 0.00 ERA through six games and 5 1/3 IP. Early on, it may have been between him and Chris Hatcher, but it’s clear this job is now Peralta’s until Jansen returns.

Everth Cabrera, SS, Baltimore Orioles (ESPN: 1.2 per cent; CBS: 11 per cent): Cabrera, slotted 25th in our Shortstop Rankings, hasn’t quite been a top 30 player at the position so far, but that could change soon — especially with his current five-game hit streak. He got a chance to start early on with J.J. Hardy hurt, so was a nice target for those seeking steals. Cabrera has only swiped one bag so far, but now that Jonathan Schoop is potentially lost for the rest of the season, a clear path for more PT has opened up. While Hardy remains out, Ryan Flaherty is also a nice short-term add as he’ll man second with Schoop out. Once Hardy returns, assumedly Flaherty will take a back seat to Cabrera at second base.

Odubel Herrera, OF, Philadelphia Phillies (ESPN: 1.9 per cent; CBS: 20 per cent): Talk about a dude coming out of nowhere. How often does a Rule 5 pick win a starting job? Herrera broke camp as the Phillies’ centre fielder and has been making a real impact recently. Over the last four games, he has three multi-hit efforts (twice getting three hits) with four runs, three doubles, two triples and two steals. Batting leadoff for the Phils, Herrera has been a real bright spot, especially now that the runs are coming. He needs to make better contact, but is already showing signs that he’s capable of adjusting on the fly.

Aaron Harang, SP, Philadelphia Phillies (ESPN: 25.2 per cent; CBS: 44 per cent): What? Two Phillies in the Troll? As we discussed in a Podcast last year, Harang got off to a nice start in 2014 as well, and despite some crappy hit rates, he was rather serviceable. This year, he’s bolted out of the gates quickly again, recording a quality start Saturday to help the Phils snap a six-game skid. Harang’s command has been splendid so far, helping him to two early wins and a 1.96 ERA. He has a nice matchup against Miami in his next start, so if you need pitching help, consider this veteran.

Andre Ethier, OF, Los Angeles Dodgers (ESPN: 0.6 per cent; CBS: 4 per cent): In late-May we talked on the Podcast about what a messy situation the Dodgers outfield was. Well, for Ethier, things haven’t gotten any prettier. Yes, Matt Kemp is gone, but Joc Pederson has arrived, leaving Ethier as the odd man out. But now Yasiel Puig (hamstring) is hurting, giving Ethier a chance to play, at least for the short term. On Wednesday, Ethier went 2-for-3 with two runs and a ribbie and then added another hit and RBI Friday. In 10 games, he’s already over one-sixth of his way to last year’s run total — accomplished in 130 games. With Ethier playing well, the Dodgers won’t rush Puig back.

Liam Hendriks, RP, Toronto Blue Jays (ESPN: unowned; CBS: unowned): Seeking relief help in a deep AL-only league? Hendriks pitched well at Triple-A last year, but got very little opportunity in either KC or Toronto as much more than a spot starter. This year, the Aussie broke camp with the Jays as a reliever, and he’s looked fantastic so far, with six shutout innings over five appearances, just two hits and one walk allowed against nine strikeouts. It’s early on, but after flaming out as a starter over and over again, could Hendriks finally have found himself as a reliever? Manager John Gibbons has to be impressed with what he’s seen so far, so Hendriks may wind up sticking in the bigs for once.

Alex Torres, RP, New York Mets (ESPN: unowned; CBS: 1 per cent): Thanks to Jerry Blevins’ fractured forearm, the Mets will need to lean heavily on lefty Torres, so expect him to gain traction in holds leagues.

Ozhaino Albies, SS, Atlanta Braves (ESPN: unowned; CBS: 2 per cent): Dynasty league owners should be keeping their eyes on this youngster as he brings some serious top-end talent to a Braves’ system that has been gutted in recent years. As one of the youngest players in the Sally League, Albies is turning plenty of heads.

Eric Sogard, 2B, Oakland Athletics (ESPN: unowned; CBS: 1 per cent): Sogard hasn’t hit particularly well this season, but if Ben Zobrist’s injury is serious, he’ll get a chance to be useful.

Roberto Perez, C, Cleveland Indians (ESPN: 0.9 per cent; CBS: 12 per cent): With Yan Gomes out for the next 5-to-7 weeks, Perez is going to get a long look. On Saturday, Perez showed what he can do with three hits, including a homer.

By RotoRob
Tags: Fantasy Baseball, Kris Bryant
This entry was posted on Sunday, April 19th, 2015 at 7:25 pm and is filed under BASEBALL, RotoRob, The Wire Troll. You can follow any responses to this entry through the RSS 2.0 feed. Both comments and pings are currently closed.