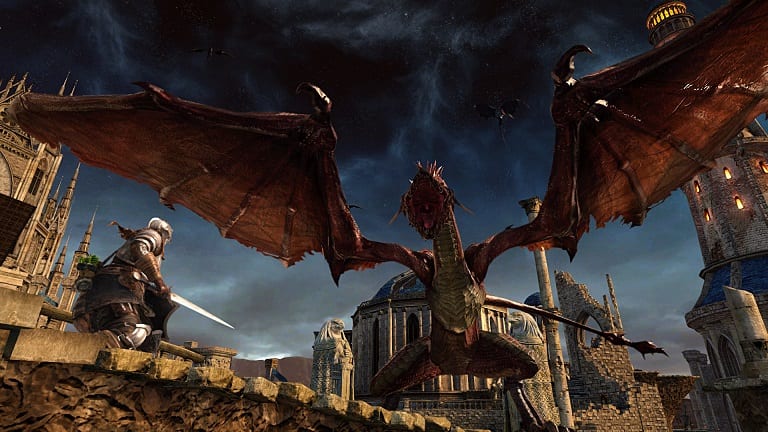 When we think of a game’s HD re-master or re-release, it’s usually nothing more than that. From Software has shaken up the meta with its HD re-master of its latest Souls installment, Dark Souls 2: Scholar of the First Sin. Contained within this title is a completely fresh approach to the game, not just upgraded visuals! Welcome back to Drangleic, even if you’ve never been here before.

With the updated frame rate of the game it was very encouraging to see the controls respond just as perfectly as they did in its former state. As far as ease of use goes, it’s definitely a game that requires a bit of practice to become completely comfortable with — that’s to no fault of its design, but rather because of the unrelenting difficulty of the gameplay.

To get your wits about you, you control your Chosen Undead with the left stick while the camera controls are bound to the right. If you have a shield equipped, you may block with L1 or attempt to parry with L2. R1 and R2 command your quick and strong attacks, and circle is your run/evade button depending on if you press it or hold it down.

Pressing or holding triangle also lets you use your main weapon (or off-handed weapon) in both hands, increasing its efficacy but usually at the cost of defense. As long as you manage to keep a cool head in the early stages of the game, by the time the real fights come about you should be well prepared.

Around these parts we’ve played us some damn Dark Souls 2, and stepping into Scholar of the First Sin was like having to learn how to walk again. The sad kingdom of Drangleic is absolutely gorgeous with its revamped textures and much improved lighting effects. Speaking of improved lighting, there’s also much improved… uh, darkening. Areas that were previously a bit dim and hard to see are now soaked in pitch black, and once a torch is lit the game reveals the beautiful shadows.

Some things did not translate as well with the updated frame rate, however, as a very small portion of enemies have some hilarious animation sets that were definitely not designed with 60 frames per second in mind. There’s also a pretty game changing glitch (confirmed as a glitch and not a “feature” at this point due to some recent calibration notes) involving weapon durability, which will be covered in the upcoming Gameplay section.

The aural experience of SotFS is just as masterful and foreboding as it always has been. Whether it’s the resting notes in Majula, the piercing wet silence of No Man’s Wharf, or a thundering orchestra during a boss fight, all of the music complements the environments perfectly.

As far as this HD re-master is concerned, From Software went ahead and turned everything seasoned players knew about the game upside down: enemy placements, vital items for progression and all-new frame data to figure out (thanks to the upgraded frame rate).

First time in Drangleic? To put things simply, you’re here in this forgotten land in order to reclaim your soul and retain your humanity. Into infinity. Over and Over. Is the Kingdom stuck in a dream (or nightmare) that it cannot awaken from? Is it doomed to repeat and embellish itself into forever?

Only vague answers to these questions can be found within, but exploring the world and fighting the grotesque monstrosities of the original game — plus all three DLC packs that came out after the initial release — is a smashing experience. So venture forth, slay the enemy hordes, invade worlds of the guilty, or protect the innocent.

Make no mistake, you will die. A lot. A few of us were pretty cocksure of ourselves, only to quickly get our asses stomped-in because of repositioned and replaced enemies. A certain enemy that pursues you also does just that, but there’s a lot more in SotFS.

As of release, there is a pretty terrible glitch that makes it so your weapons degrade at a drastically increased rate because of the change in frame rate, so veteran players might notice that they have to constantly switch weapons and/or carry many extras in order to progress. This is apparently going to be addressed, but a release date for the patch has not been hinted at, yet.

Aside from a few small issues, Dark Souls 2: Scholar of the First Sin is a wonderful way to kick off the series if you’ve never played before, and if you’re a returning player there are plenty of surprises in store to keep you on your toes more than ever before. With the main game, all three DLC packs, upgraded visuals and refreshed gameplay, From Software shows us just how awesome an HD re-master can be if a company truly loves its game.

By Jeff Cater
Tags: Dark Souls II: Scholar of the First Sin
This entry was posted on Tuesday, April 21st, 2015 at 1:14 am and is filed under Jeff Cater, Video Game Reviews. You can follow any responses to this entry through the RSS 2.0 feed. You can skip to the end and leave a response. Pinging is currently not allowed.