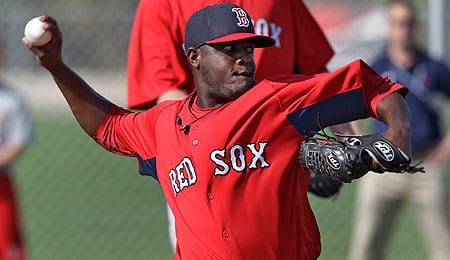 The Cardinals finally turned to top prospect Oscar Taveras Saturday and he responded in fine form, smashing a solo shot into the right field bleachers in his second at-bat. Unfortunately for Fantasy owners he’s owned in 76 per cent of CBS leagues, so the opportunity to buy-in is likely over. This is just the beginning of a series of potential promotions as young top tier talent like Gregory Polanco, Jon Singleton and Andrew Heaney are all chomping at the bit to show their skills in the bigs. These players merit our attention, so if they not currently owned in your league, rectify that situation.

Without further ado, let’s look at this week’s Troll recommendations.

Kendrys Morales, 1B, Free agent (CBS: 31 per cent owned, ESPN: 13 per cent): The clock is ticking and sometime in the next couple of weeks expect free agent Morales, slotted 31st in our preseason First Base Rankings, to find a home (the Yankees, perhaps? See video below). If your Fantasy squad needs the 10-to-15 homers, and 40-to-50 RBI he has the potential to provide down the stretch, buy in now. Come mid-June, Morales’ days as a free agent will be behind him.

Yonder Alonso, 1B, San Diego Padres (CBS: 17 per cent owned, ESPN: 1 per cent): Alonso has been on a tear since the middle of May, demonstrating the potential we saw back in 2012 when he hit 39 doubles with a .348 OBP. He’s belted four homers with 12 RBI and swiped three bases during this run, taking a step in the right direction that shouldn’t be ignored.

Tommy La Stella, 2B, Atlanta Braves (CBS: 10 per cent owned, ESPN: 1 per cent): Singles and walks — that’s La Stella’s game. The other option is the swing and miss stylings of Dan Uggla, but the Braves have simply tired of that game.

Josh Willingham, OF, Minnesota Twins (CBS: 24 per cent owned, ESPN: 5 per cent): Since Willingham’s return from the DL last week he’s mashed two homers and driven in six. He will be hitting in the heart of the Twins batting order, so consider him if you need to boost your power numbers.

Jon Singleton, 1B, Houston Astros (CBS: 49 per cent owned, ESPN: 1 per cent): The Astros didn’t spoil us with an early promotion of Singleton but it shouldn’t be long before we see his impressive power in the Houston lineup. He’s now up to 14 homers in 195 at-bats at Triple-A Oklahoma City, so buy now while you still have the opportunity.

Oswaldo Arcia, OF, Minnesota Twins (CBS: 27 per cent owned, ESPN: 3 per cent): Arcia has knocked the rust off and is ready to return to the form that saw him hit 14 homers in 351 at-bats in his 2013 rookie campaign. He was promoted Monday and since then is 9-for-25 with two long balls. The fact he’s hitting in the cleanup slot bodes well for his owners that need RBI.

Robbie Grossman, OF, Houston Astros (CBS: 4 per cent owned, ESPN: unowned): A sprinkling of homers, a bit of speed, and the ability to get on-base makes Grossman an intriguing option in AL-only and very deep mixed leagues.

Stephen Drew, SS, Boston Red Sox (CBS: 22 per cent owned, ESPN: 3 per cent): Drew is getting into game shape down on the farm is expected back in Boston later this week. If you’re looking for some out of your shortstop, part with some FAAB this weekend.

Shae Simmons, RP, Atlanta Braves (CBS: 1 per cent owned, ESPN: unowned): Simmons was absolutely lights out as the closer at Double-A Mississippi, saving 14 while allowing only two earned runs in 23 IP. The Braves bullpen hasn’t been its usual stellar self this season and we wouldn’t be at all surprised to find Simmons work his way into a prominent role in short order.

Marcus Stroman, SP, Toronto Blue Jays (CBS: 23 per cent owned, ESPN: 1 per cent): The failed bullpen stint behind him, Stroman was called up Saturday to give Drew Hutchison a day off and proceeded to demonstrate why he is one of the Jays’ top pitching prospects. Six innings of five-hit ball, no walks, one earned run and six strikeouts later Stroman had his first win as a Toronto starter. This could be a one-off and he’ll head back to Triple-A Buffalo as Liam Hendriks has pitched well, but either way Stroman has served notice that he can get the job done, so this won’t his last appearance this year.

Daisuke Matsuzaka, SP, New York Mets (CBS: 9 per cent owned, ESPN: 2 per cent): We mentioned Matsuzaka as a bullpen option back in April, but with Jenrry Mejia providing some stability to the pen, the Mets have decided to give Dice-K an opportunity in the rotation, replacing Rafael Montero. In a spot start Tuesday against the D-Backs, Matsuzaka earned the win with six quality innings (three hits, two earned runs). He’s done everything the Mets have asked and done it in fine form.

Francisco Lindor, SS, Cleveland Indians (CBS: 18 per cent owned, ESPN: unowned): At Double-A, Lindor is demonstrating the skills that have him penciled in as the opening day shortstop for the Tribe in 2015. In 197 at-bats, he’s hit four homers, driven in 32 runs, and swiped 11 bags. The Indians are having a tough year and could chose to move pending free agent Asdrubal Cabrera prior to the trade deadline, making Lindor a solid option for a bench slot in all formats.

By Tim McLeod
Tags: Kendrys Morales
This entry was posted on Sunday, June 1st, 2014 at 3:50 pm and is filed under BASEBALL, The Wire Troll, Tim McLeod. You can follow any responses to this entry through the RSS 2.0 feed. Both comments and pings are currently closed.