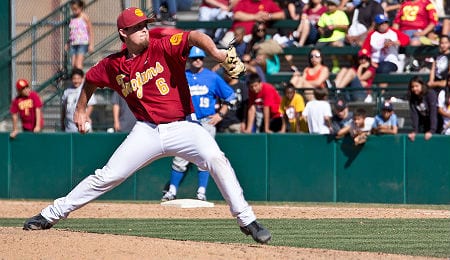 Kyle Davis has been shutting the door for the Trojans. (Joseph Chen, Daily Trojan)

The club keeps winning close games thanks to the near impenetrable force that is closer Kyle Davis. The junior righty put out another fire Saturday to earn his fifth save of the season — over halfway to last year’s total of nine.

He’s proven himself as a shutdown closer and last year experienced an increase in velocity. Davis has flashed an improving slider and also throws a curveball and a changeup (see video below for a look at his arsenal).

On Saturday, Junior starter Kyle Twomey was rolling along after six, but hit a snag in the seventh inning, and was pulled after a leadoff walk and then a one-out single. Unfortunately, the bullpen allowed both inherited runners to score, putting a blemish on what was an otherwise stellar outing by Twomey.

Twomey was taken by the A’s in the third round in 2012, but opted to attend USC. So far, that decision looks wise as last year he only gave up 50 hits in 55 IP with 50 strikeouts and 20 walks, pitching mostly in long relief and as a spot starter. Twomey has a smooth delivery and an advanced approach to pitching. Among NCAA Juniors, he’s likely a top 35 draft prospect, so keeper league owners should keep this name in mind.

On Sunday, USC wrapped up a sweep of Fordham and it was Sophomore C/DH Jeremy Martinez who helped get things going with an early RBI single. He’s been slumping lately, so it was good to see him contribute. Martinez is just 10-for-41 (.244) so far, but is showing tremendous strike zone judgment with 11 walks against just six strikeouts.

Last season, he was named a Louisville Slugger Freshman All-American after batting almost .300. In 2013, after gaining prominence with one of the most dynamic high school programs in the country (Mater Dei High in California), Martinez was a 37th round pick by the ChiSox before opting to go to college. He’s going to need to pick things up to match the 55 hits he accumulated as a freshman. Martinez is known as a consistent performer and has serious potential with the bat, which is a good thing, because his future behind the plate looks iffy.

Now it’s your turn. Who on the USC Trojans are you keeper league owners tracking? Let us know in the comments below.

By RotoRob
Tags: Baseball America, Cape Cod League, Fordham, Kyle Davis, Kyle Twomey, NCAA, Oakland Athletics, UC Santa Barbara, University of Southern California Trojans
This entry was posted on Tuesday, March 3rd, 2015 at 3:34 pm and is filed under BASEBALL, College sports, RotoRob, Scouting Report. You can follow any responses to this entry through the RSS 2.0 feed. Both comments and pings are currently closed.