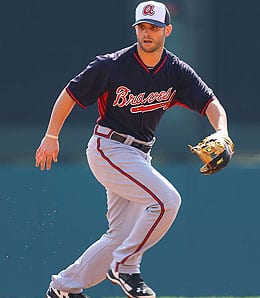 Tommy La Stella should be a hot Fantasy commodity after shifting to leadoff. (Curtis Compton/AJC)

This week on RotoRob Fantasy Baseball Weekly Podcast, heard every Thursday at 9 p.m. EST on Blogtalkradio, RotoRob was joined by The Fantasy Insiders’ Joel Henard, back for a second appearance after making his debut on our Podcast last month. Unfortunately, RotoRob kept getting kicked off, but Joel has a legitimate radio cave, so basically, he can survive a direct hit from an ICBM and keep broadcasting.

Among the topics the boys covered this week:

To hear 70-plus minutes of pure Fantasy baseball goodness, all you need to do is click the play button below. It’s that easy.

By RotoRob
This entry was posted on Friday, June 20th, 2014 at 9:43 pm and is filed under BASEBALL, Joel Henard, Podcast, RotoRob, RotoRob's Fantasy Baseball Weekly. You can follow any responses to this entry through the RSS 2.0 feed. You can skip to the end and leave a response. Pinging is currently not allowed.