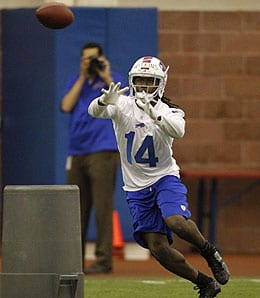 The Bills got their man in Sammy Watkins. (Bill Wippert/AP)

This year’s crop of pass catchers has often been referred to as deep. We will not dispute that theory and to further the query we now give you Part One of our Fantasy Stock Report for the wide receivers plucked in last month’s NFL Draft. This week, we break down WRs from Rounds One and Two. Next week we’ll break down the rest from Round Three on. — JJ

Sammy Watkins, Buffalo Bills: The Bills thought the world of Watkins, as they were willing to trade up to the top spot if necessary to get him. A playmaker in every sense of the word, he may be the only true No. 1 receiver in this year’s draft, and he really wound up being one of the faces of the draft (even getting used in a draft promo by ESPN — see video below). The Bills are a run-first team and E.J. Manuel still has much to prove, but Watkins still has solid Fantasy value in 2014.

Mike Evans, Tampa Bay Buccaneers: It will be a little different for Evans in the NFL, as he won’t have Johnny Football lofting rainbows to him against little-known defensive backs. We believe the 6’5”, 231-pound Evans will see much tighter coverage and a steeper learning curve with Josh McCown as his signal-caller, but the rookie receiver is worth a late-round look, as he could produce long-term keeper rewards down the road when he develops a rapport with another young gun in QB Mike Glennon.

Odell Beckham, New York Giants: Beckham does not figure to provide much Fantasy value initially given Eli Manning’s recovery from injury and ineffectiveness and a likely No. 3 role behind Victor Cruz and Rueben Randle, but don’t factor him out of your plans completely. The Giants envision Beckham making a big impact sooner rather than later, so a late-round selection means potential big-time keeper benefits for 2015 and beyond.

Brandin Cooks, New Orleans Saints: We don’t think it’s a stretch to say that Cooks could end up having the biggest Fantasy impact of any wideout in this year’s draft class given his potential to ascend to the top of the Saints’ depth chart and the quarterback throwing to him. With Drew Brees’ ability to spread the wealth, Cooks could come in handy as a target that could average four catches a game and find the end zone every other game in an ideal scenario. Don’t hold your breath waiting for Cooks, but he has definite keeper value and could be a factor in your 2014 plans.

Kelvin Benjamin, Carolina Panthers: Benjamin is a big-bodied target that could end up No. 1 on his team’s depth chart, so he has some intriguing potential to be a late-round find. But he also has several things working against him, namely the fact that he doesn’t have much help around him playing for the Panthers and a habit of dropping a lot of passes. Because he’s a solid red-zone target (and apparently reminds his GM of a young Plaxico Burress), don’t pass up the chance to grab Benjamin in the very late rounds if you can to reap the rewards down the road.

Marqise Lee, Jacksonville Jaguars: After taking quarterback Blake Bortles in Round One, the Jaguars wasted no time in surrounding him with new weapons. If Lee can avoid injuries and regain the form that made him a star in 2012 (118 receptions for 1,721 yards with 14 scores), many around the league could regret passing on the former USC Trojan. Even with Justin Blackmon’s cloudy outlook, the future remains bright for the Jacksonville offense.

Jordan Matthews, Philadelphia Eagles: We here at RotoRob.com have been high on Matthews for months. He only left Vanderbilt as the vaunted SEC’s all-time leader in receptions with 262 and receiving yards with 3,759, and he did it with a team that was vastly overmatched most Saturdays. Coach Chip Kelly should have no problem finding ways to employ his new 6’3″ weapon who ran a 4.46 40-yard-dash at the Combine.

Paul Richardson, Seattle Seahawks: Very few wideouts can average over 40 yards on touchdown receptions at any level, but that’s what Richardson did on his 20 scores for the Buffaloes. Defenses will have plenty to worry about when facing the Seahawks this year; not only does Seattle feature a strong running attack, but now with the big-play abilities of Richardson to complement a healthy Percy Harvin and an emerging Doug Baldwin, quarterback Russell Wilson could be headed towards a Fantasy breakout year.

Davante Adams, Green Bay Packers: Prior to the draft, numerous scouts called Adams a James Jones clone, so after losing Jones to the Raiders, Adams made perfect sense for Green Bay with the 53rd overall pick. Adams joins a high-powered attack after leading the country in receptions with 131 last year at Fresno St. and is one to keep an eye on; however the fact that he’s coming into the league as a 21-year-old, along with the number of talented pass-catchers already in Green Bay, may indicate a year or two of development could be in store before he starts lighting up stat sheets at the pro level.

Cody Latimer, Denver Broncos: Latimer is expected to be brought along slowly as he recovers from a foot injury; something the Broncos can afford to do with Demaryius Thomas, Wes Welker and Emmanuel Sanders already in house. Running a 4.39 40-yard-dash at his Indiana pro day vastly helped his draft stock, leading Denver G.M. John Elway to believe Latimer can develop into yet another big-play threat for this already record-setting offense.

Allen Robinson, Jacksonville Jaguars: Jacksonville didn’t stop stockpiling talent at wide receiver when it took Lee early in Round Two, choosing to also add Robinson with the 61st overall pick. Robinson will team up with Lee, Cecil Shorts and Ace Sanders to give the Jaguars one of the best young receiving corps in the NFL. The biggest of the bunch at 6’2″, 220 pounds, Robinson could wind up as Jacksonville’s top red-zone target.

Jarvis Landry, Miami Dolphins: Although a more consistent producer than his LSU counterpart Odell Beckham, a poor 40-yard-dash time (4.77) caused Landry to fall all the way to the second last pick of Round Two. The improving Ryan Tannehill should appreciate having a solid possession receiver to go along with Brian Hartline and speedster Mike Wallace. Landry’s solid route-running and strong hands should compensate for any lack of top-end speed.

By Josh Johnson
Tags: Sammy Watkins
This entry was posted on Wednesday, June 4th, 2014 at 11:35 pm and is filed under 2014 RotoRob NFL Draft Kit, Draft report, FOOTBALL, Josh Johnson, Michael Seff, Nick Wagner, Rookies. You can follow any responses to this entry through the RSS 2.0 feed. Both comments and pings are currently closed.