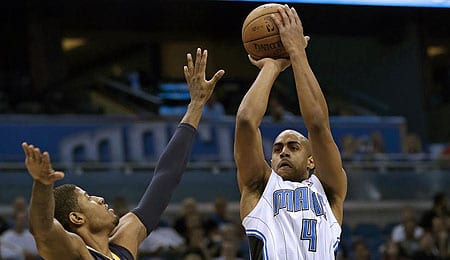 Arron Afflalo has been shooting the lights out for the Magic. (AP)

Welcome to yet another season of the NBA Wire Troll, our weekly Fantasy basketball waiver wire recommendations column. Our goal is to dig deep, so you won’t find any players here that are owned in over half of Fantasy basketball leagues.

Tim Duncan is hurting and missed Friday’s action with a chest contusion; Patrick Beverley is ailing, allowing Jeremy Lin to regain his starting role; and Kobe Bryant bagged $24 million Friday – as an advance on his salary this season.

Enough preamble… let’s get to this week’s recommendations.

Arron Afflalo, SG, Orlando Magic: Slotted just inside the top 25 of our Shooting Guard Rankings, Afflalo has the ability to take over a game, as he showed Friday when he was 5-for-5 for 15 points in the third quarter as part of a 30-point effort (10-for-14 from the field) that led the Magic to its first win of the young season. Coming off a 28-point, nine-rebound, five-assist showing Wednesday, Afflalo is sure to be one of the top waiver pickups this weekend, so make haste to the wire if you need scoring help. Dating back to his Denver days, he’s always been “an assassin,” as you can see in the video below.

Alec Burks, PG/SG, Utah Jazz: Burks was a stud at the University of Colorado, but he hasn’t really worked his way onto the Fantasy radar as a pro – until now. He came off the bench in the season opener to lead the Jazz with 24 points and followed that up with an efficient 6-for-9 shooting performance for 15 points Friday. Burks is 0-for-4 from downtown so far, but that’ll come around in time and before you know it, he may be shifted into the starting five. Jump on his train before that happens.

Lance Stephenson, SG, Indiana Pacers: The way Stephenson is rolling, Danny Granger won’t be regaining his starting role, assuming he ever gets healthy.

Trevor Ariza, SG/SF, Washington Wizards: Ariza got a Wire Troll nod from us in early March and it was a nice call as he jacked up plenty of treys down the stretch. He’s not going to last on the wire after going off for 28 points and 10 boards in the opener and then flirting with a triple double Friday (12 points, 14 boards, six assists). Ariza is playing 38.5 MPG so far, and while he’ll have to fend off Martell Webster, Ariza is currently the man to own.

Miles Plumlee, PF/C, Phoenix Suns: Plumlee didn’t log heavy minutes at Duke, but he’s seeing them now with the Suns, averaging 37.5 and responding with back-to-back double-doubles to open the season. As the starting centre in Phoenix, he’s got a great chance to be very useful, but it’s going to be extremely difficult for him to keep up this pace, so temper your expectations. Still, you’ve got to love the early numbers from Plumlee, who knows how to throw a block party as well, swatting a half dozen in the first two games.

P.J. Tucker, SG/SF, Phoenix Suns: Tucker is the starting three right now in Phoenix and is doing enough to be worth a claim.

Josh McRoberts, PF/C, Charlotte Bobcats: McRoberts is going to have to deal with promising rookie Cody Zeller battling for his job, but for now, McBob – re-signed this summer for two years and $5.5 million – is rewarding Charlotte’s faith. McRoberts scored 15 points and canned three treys in the opener and then battled through foul trouble Friday to drop eight dimes with two steals and another block. This is one of those dudes that doesn’t rack up a lot of points (he was 0-for-3 from the field in a scoreless effort Friday), but can help you in other areas, and sometimes players like this fly under the radar.

Tiago Splitter, San Antonio Spurs: Slotted 24th in our Centre Rankings, Splitter may frequently look awkward on the floor, but you look up at the end of the night and see some serviceable Fantasy numbers. After scoring 11 points with eight boards in the opener, he saw more action Friday with Tim Duncan (chest) out and took advantage on the glass with 14 rebounds, narrowly missing his first double-double of the season (he had 11 in 2012-13).

Vitor Faverani, Boston Celtics: Faverani has come out of nowhere to become an instant cult figure in Boston, scoring in double digits in both games and pulling down 18 boards with six blocks Friday.

Now it’s your turn. In the comments below, let us know who your favourite Fantasy basketball waiver wire pickup of the week is.

By RotoRob
This entry was posted on Saturday, November 2nd, 2013 at 1:08 pm and is filed under BASKETBALL, RotoRob, The Wire Troll. You can follow any responses to this entry through the RSS 2.0 feed. You can skip to the end and leave a response. Pinging is currently not allowed.