2014 NBA Free Agency Preview: Should I Stay or Should I Go? 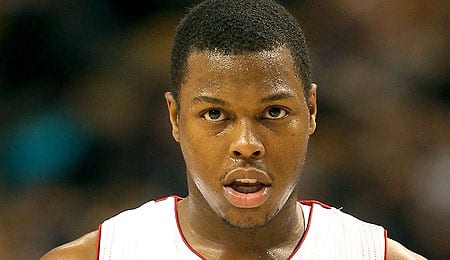 Kyle Lowry is likely to stick with the Raptors. (Raptorscage.ca)

[Editor’s note: Please join me in welcoming J.R. Anderson to the RotoRob.com family.]

Today, we predict where some of the big free agents not named LeBron James or Carmelo Anthony will go and how it may affect their Fantasy numbers.

Riding a breakout season in which he set career marks in points, assists and threes, Lowry has set himself up nicely entering free agency… maybe. Cap space is becoming increasingly valuable and many GMs could be reluctant to shell out the money and years Lowry is expecting, even after leading the Raptors to the playoffs. Pair this with Lowry’s well documented (though hopefully behind him) attitude problems and health concerns (you can’t play that hard that much at six-feet and not expect to get banged up) and it seems like more than enough for some teams to take pause.

Should wind up with: Los Angeles Lakers

The Lakers have the need and the cap space to sign Lowry. With all due respect for what Kendall Marshall and Jordan Farmar did last season, it was just more proof that they are not starters in this league. This move makes even more sense if the Lakers hire a defensive-minded coach such as Byron Scott. All this and on top of it, the Lakers might be able to do it without losing Steve Nash and his mentoring. Couple that with some of Kobe Bryant’s competitive spirit rubbing off on you, and what more could you want?

Fantasy Impact: There is no reason to believe Lowry can’t put up the same numbers as he did last season if not better. It would all depend on Kobe’s willingness to let someone else do the heavy lifting some nights. Bryant knows what it takes to win championships and signing Lowry could help him get one step closer to that goal, so we don’t see any butting of heads, only two guys out to prove something.

Will wind up with: Toronto Raptors

Ultimately that is where we think Lowry ends up. Toronto originally planned to move him and could have dealt him at the trade deadline, but didn’t (mostly because after its Rudy Gay build for the future trade, the present surprisingly got much better). If the Raptors show the same commitment to Lowry by offering him the contract he is worth and he shows the same willingness to win by taking a hometown discount (allowing for some cap flexibility to make any minor changes needed), we’re sure they can make a deal somewhere in the middle. The East is shallow, and should be for at least a few more years. Why not try to make a run at it?

Fantasy Impact: Last season we think Lowry hit his ceiling as far as Fantasy value goes. To break through that ceiling he would need to see a nice improvement all around from Jonas Valanciunis/Terrence Ross and a sustained level of production from Amir Johnson and the rest of the crew. Couple that with some minor tweaks and he should be a top five point guard.

The three-headed monster that was supposed to be Monroe, Josh Smith and Andre Drummond flopped almost as bad as a feature film starring a three-headed monster would flop at the box office. But as bad as that flop was it did accomplish a few positives, namely Joe Dumars’ dismissal and the beginning of the Stan Van Gundy era in Motown! And since the arrival of SVG, it has been increasingly clear that one of the three must go. Drummond is as close to untouchable as it gets and J-Smoov’s contract is as equally untouchable to any other team with a GM that is interested in still being a GM for long. That leaves Monroe as the odd man out. With LaMarcus Aldridge seemingly warming up to the idea of sticking it out with the up and coming Blazers and a lack of quality bigs hitting the open market anytime soon, we’d say Monroe would be a nice addition to any team wanting to solidify its frontcourt.

Should and will wind up with: Dallas Mavericks

If we could play for any current owner in the NBA, hands down it would be Mark Cuban. Known for the way he treats his players and the willingness to spend the money needed to win, nobody would be better. With plenty of cap space and an urgency to surround aging Dirk Nowitzki with enough talent to chase at least one more championship, Monroe would be a more than ideal fit alongside Monta Ellis and Jose Calderon to help with that goal.

The restricted tag makes this a little tricky as Dallas would really have to make a big enough offer that Detroit just wouldn’t match, or hope it could swing a sign and trade deal if Detroit does threaten to match.

Fantasy Impact: As the go-to guy down low, expect Monroe to see plenty of easy and close looks at the basket. Rebounding would also increase without Smith and Drummond there to compete with, though we’re not sure his other defensive stats would jump high enough to consider him your number 1 big, but 16/10/2.5 combined steals and blocks wouldn’t be too out of the question.

We think by now you all are aware of the Love saga. In short: he wants out and he has every right to. The Wolves’ poor management since he was drafted has resulted in a toxic situation and the incoming management arrived too late to fix, but not too late to benefit. Minnesota will get something significant for Love no matter what, he’s too good a player and the market is such a hard sell to free agents to just take back expiring contracts and mid-round picks and hope for the best. This isn’t a matter of will he go, it’s where. Fantasy-wise, Love is going to do his thang (minus a few points depending on where he goes) so maybe just hope he ends up on the team you root for and hope he slips a few spots back in your draft.

Now it’s your turn. Which potential NBA free agents are you tracking?

Coming Soon: NBA Editor Bob Raymond will be checking in with our 2014 NBA Mock Draft in about three weeks.

By J.R. Anderson
Tags: LeBron James
This entry was posted on Thursday, May 29th, 2014 at 12:20 pm and is filed under BASKETBALL, Free agents, J.R. Anderson. You can follow any responses to this entry through the RSS 2.0 feed. You can skip to the end and leave a response. Pinging is currently not allowed.