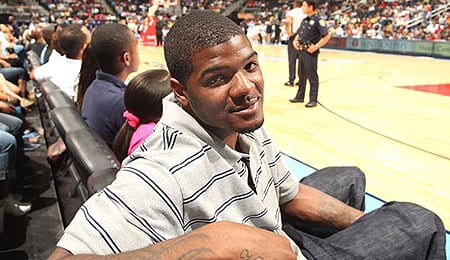 Josh Smith is taking his block party to Motown. (Freddyo.com)

The 2013-14 RotoRob NBA Draft Kit is back in action today with the release of another cheat sheet. So while you wonder whether Derrick Rose’s latest knee woe is something you should worry, let’s examine the top 35 small forwards in Fantasy basketball.

Next to point guards, small forwards represent the most plentiful group in the NBA this season. There is so much strength here, ranging from promising youngsters (Kawhi Leonard and Harrison Barnes), to wily vets (Paul Pierce, Andre Iguodala) and the best players in the entire league in King James and KD. While we listed Paul George as a SG, he also qualifies here, only adding to the extensive depth at the three.

You can invest early in one of the big boys or wait and still land yourself some serious talent – and category versatility – here.

1. LeBron James, Miami Heat (2): There’s a reason LBJ has the top selling jersey in the game. Think this guy is driven to stay on top? Just look at his freaking workout regimen! The four-time MVP is gunning for more after enjoying the best shooting of his career last season. Since his last season in Cleveland, James’ trips to the line have been in steady decline, but we’re quibbling now. He’s driven to ensure his place in history with a third championship ring and we’re not betting against the King (check out the video below to find out why).

2. Kevin Durant, Oklahoma City Thunder (1): As good as Durant was last season in a career year (which included a career game in mid-January), he just turned 25, so may yet have upside in his game. Last season, his PT was down slightly for the third straight season, leading to fewer buckets, but he made up for that with career highs in FG and FT percentage. Durant has been lauded as a great teammate and he’ll earn his first ring as a reward soon enough.

3. Carmelo Anthony, New York Knicks (3): Although he dealt with some injury issues, when he was active, Melo played heavier minutes last season, and would up sinking more buckets en route to his first scoring title. It was nice to see his FT percentage bounce back after a somewhat down season in 2011-12.

4. Josh Smith, Detroit Pistons (2 at PF): After spending nearly a decade teasing Hawk fans with his immense talent, Smith was allowed to head to Motown as a free agent this summer. Last season, his shooting touch bounced back to normal career levels, but his turnovers rose and his scoring went down as his overall game regressed slightly. Smith is a stellar defender that really knows how to challenge opposing shooters and throw a block party.

5. Rudy Gay, Toronto Raptors (4): Gay had bounced back in three-pointers per game for Memphis last season before getting traded to Toronto, where he improved his shooting touch. This preseason, he continues to pour in the points as the Raptors’ new go-to scorer. Moving to the Eastern Conference agreed with Gay, so don’t be taken by surprise if he breaks through with his first All-Star campaign.

6. Nicolas Batum, SG/SF, Portland Trail Blazers (8): Last year, we bumped Batum into the top 10, and now he’s just outside the top five. Batum suffered a concussion in preseason, prompting us to lower him slightly in our rankings. Last season, the French swingman continued his upward trajectory, seeing more PT than ever before en route to a career-best 165 treys. The 24-year-old will likely flirt with becoming a 15 PPG man this season.

7. Paul Pierce, Brooklyn Nets (5): How weird is it seeing Pierce in a Net uniform (where he’ll be reunited with Joe Johnson) instead of his traditional Celtic green? He must have thought so, too, racking up more fouls than points in his Nets’ debut. Last season, The Truth proved he had plenty left in the tank, doing a much better job from downtown, but not getting to the line quite as often. The Nets have a very different vibe this season thanks to Pierce and all the other newcomers. It’ll be fascinating to see how they all gel together.

8. Jeff Green, SF/PF, Boston Celtics (32 at PF): We slotted Green into the power forward rankings just before last season started. Boston desperately needs Green to be at his very best this season – especially early on as the rebuilding Celtics await Rajon Rondo’s return. Last season, Green returned from a heart ailment to become a bigger part of the Boston offense, and we’re expecting even more touches this season. The improved outside shooting touch was also a very positive sign for Green. Let’s see if new Celtic Coach Brad Stevens can find the right buttons to push to drive Green to a career season.

9. Kawhi Leonard, San Antonio Spurs (18): Leonard dealt with injuries last season, but when he was active, he made a huge leap forward in his sophomore effort, earning honourable mention in our Wire Troll All-Star team. He sunk more buckets and hoisted up far more attempts from downtown. Leonard looks very good in training camp and is a prime candidate for a major breakout.

10. Thaddeus Young, Philadelphia 76ers (12): Young missed some time February, but this season, with Andre Iguodala and Jrue Holiday gone, he is likely the most valuable 76er now and poised to enjoy another career season on what will almost certainly be a very weak team. The past few seasons, Young’s outside game has disappeared, but the flipside is he’s gotten to the line more often.

12. Andre Iguodala, SG/SF, Golden State Warriors (5 at SG): Now that Iggy is in Silicon Valley, he’s invested his money in tech funds and venture capital funds. Maybe he should worry about fixing his game, which has been in regression for the past five years. Iguodala stayed healthy in his only season in Denver and wound up sinking more buckets, but his FT shooting took a major bath and his rebounding plummeted to career lows. Denver will miss him, but it will be interesting to see what kind of impact he’ll have on Golden State.

13. Tobias Harris, Orlando Magic (30): The trade to Orlando really changed things for Harris last season as he exploded as a member of the Magic. He shot extremely well from the line for the Bucks and moved into the starting lineup in Orlando, where he really stepped up his outside game. There’s major breakout potential here.

14. Luol Deng, Chicago Bulls (11): Deng has had a tough time staying healthy the past couple of years, but when he was in the lineup, he enjoyed a better performance last season. His outside game slipped but he averaged three assists per game for the first time in his career. The Bulls are primed for one last run with this group, so it will interesting to see what Deng’s future is in Chicago if this team can’t succeed this season.

15. Danny Granger, Indiana Pacers (6): Granger missed most of last season with a knee injury and it’s unclear whether he’ll start or come off the bench this season as he did in 2012-13. In the brief action he saw last season, it was clear he was not right. There’s no doubt that a healthy Granger will make the Pacers a better team, but can he ever return to the dominance he displayed a few years ago?

16. Maurice Harkless, Orlando Magic (NR): The 76ers first round pick last year, Harkless enjoyed a fine campaign for the Magic, seeing plenty of action and hoisting up 1.5 three-point attempts per game. Only 20, he is already one of the bright young talents in the game with plenty of upside.

17. Wesley Matthews, Portland Trail Blazers (13 at SG): Matthews underwent elbow surgery after the season, but when he was healthy, he bounced back somewhat last season. His rebounding slipped, but he made more assists than ever. Matthews’ real value is as a spot up shooter that nailed 2.4 treys per game.

18. Gordon Hayward, SG/SF, Utah Jazz (14 at SG): Hayward was better last season, but he could be poised for a major step forward with both Al Jefferson and Paul Millsap gone. Last season, he struggled from the field, but was much better from downtown. Hayward was expected to start at SF, but instead, he’ll be the starting two-guard for the Jazz, with Richard Jefferson manning the three.

19. Andrei Kirilenko, Brooklyn Nets (15): The Nets should be a much improved squad after all their changes, including the addition of AK-47. After spending a year playing back home in Russia, Kirilenko returned to the NBA last season and looked revitalized, enjoying his finest season since 2005-06. He didn’t sink as many treys and his blocks were down, but he made up for it with more steals, boards and points. Kirilenko remains a force on the defensive end.

20. Evan Turner, SG/SF, Philadelphia 76ers (14): When he isn’t screwing up media day, Turner keeps improving as an NBAer. The durable swingman showed a way better touch from beyond the arc and he got the line more often – a great combination of skills improvement. The fact that Turner got to the line 10 times in the Sixers’ second preseason games is a portent that he’s about to become a much bigger offensive presence.

21. Anthony Bennett, Cleveland Cavaliers (NR): The Cavs surprised everyone when they grabbed Bennett first overall in this year’s draft and really, he’s been sort of flying under the radar since. Because Cleveland already has a fair amount of depth, it has no plans to throw Bennett right into the fire, so he could start slowly. However, we expect him to be a Fantasy factor before all is said and done this season.

22. Harrison Barnes, Golden State Warriors (19): Part of an emissary the NBA sent to China to help promote the game, Barnes is dealing with a foot injury this fall, but it doesn’t sound serious. He had a decent rookie season, although we’d like to see him pull down more boards. Barnes is expected to remain a starter with Klay Thompson coming off the bench.

23. Shawn Marion, Dallas Mavericks (23): Part of an aging crew the Mavs need to stay healthy if they are going to be a playoff team this season, Marion enjoyed his best season in Dallas in 2012-13 even though his PT was down slightly. His touch from downtown bounced back and the rest of his numbers experienced a bit of a renaissance as well. The Matrix is reportedly a bit too sensitive, but few players in the NBA offered his across the board skill set, even if they have waned over the years.

24. Michael Kidd-Gilchrist, Charlotte Bobcats (13): Kidd-Gilchrist wasn’t the impact rookie we thought he would be. He received decent PT, but whatever outside game he had at Kentucky did not materialize in the pros. Kidd-Gilchrist is a fine perimeter defender and he offers some nice upside as an across the board talent.

25. Otto Porter Jr.,Washington Wizards (NR): Georgetown’s loss will be Washington’s gain as Porter is not only a talented player, but a great humanitarian as well, recently buying a homeless man a sandwich and eating his lunch with him. The Wizards’ first rounder is going to create matchup problems with his size and he should be a solid defender in the NBA.

Now it’s your turn. What changes would you make to this cheat sheet? Let us know in the comments below.

By RotoRob
This entry was posted on Monday, October 14th, 2013 at 9:24 pm and is filed under 2013-14 RotoRob NBA Draft Kit, BASKETBALL, Cheat sheets, RotoRob. You can follow any responses to this entry through the RSS 2.0 feed. Both comments and pings are currently closed.