The Wire Troll: Beno Udrih Getting More Burn in Orlando 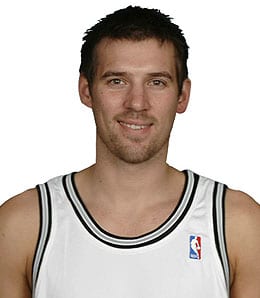 Beno Udrih is taking advantage of injuries on the Magic.

James Harden shook off a slump to help the Rockets inch towards a playoff spot; Jeff Green earned consideration as Eastern League Player of the Month for March; instead, the honour went to LeBron James — his fifth straight monthly award, making him the first player to win it that many times in a row in the same season. Yes, we suppose he’s good.

Beno Udrih, PG, Orlando Magic: Heading into the season, we expected Udrih to be part of an improving Buck squad. He shot well in his bench role in Milwaukee before getting shipped to the Magic Kingdom in the J.J. Redick deal in late-February. Since then, Udrih has sunk substantially more buckets and he’s really taken off lately with Jameer Nelson (ankle) missing in action. He’s scored in double figures in five straight (including a season-high 27 Friday) while averaging 8.4 dimes and 2.2 treys, four boards and 1.6 steals over that stretch. Udrih is balling right now, so makes for a sweet short-term grab.

Francisco Garcia, SG, Houston Rockets: We slotted Garcia 40th in our Small Forward Rankings, but he’s barely been a top 65 player at the position even though he was getting to start more often with the Kings before getting dealt to Houston (where he’s really picked up his three-point shooting). Now, with Chandler Parsons and Carlos Delfino out, Garcia is getting a chance to start for the Rockets and he responded Friday with 11 points, three steals, three treys and a couple of boards. The swingman has a chance to taste the playoffs for the first time since he was a rookie back in 2005-06, and the possibility of postseason play seems to be inspiring him.

Mike Miller, SG/SF, Miami Heat: Miller hasn’t played much this season, but with all the injuries in Miami, he’s getting PT now and went off for a season-high 26 points (and seven trifectas) Friday.

Jonas Jerebko, SF/PF, Detroit Pistons: It’s been a year and a half since Jerebko popped up on the Fantasy radar, but now that Jason Maxiell is done for the season, the third-year Swedish forward is getting enough minutes to earn value. In the last two games, Jerebko has averaged 17 points, 5.5 boards, two assists, one trey and 1.5 steals — good enough to be worth a look. Expect him to see more time at the four than at the three next season, but that’s a good thing as he’s been more effective as a power forward.

Bismack Biyombo, PF, Charlotte Bobcats: We recommended Biyombo a couple of months ago, and it was a good call as he saw his most action in February and then sunk more buckets in March. It’s all about the blocks and boards here and he’s really picked up the pace lately with 1.8 swats and 8.6 rebounds over the past five contests. Don’t look for offense here, but this skilled pick-and-roll player can definitely help get you over the hump in a couple of cats.

Wilson Chandler, SG/SF, Denver Nuggets: Danilo Gallinari (torn ACL) is done for the season, giving Chandler a chance to do some big things. Let’s see if Chandler takes over as the starting three.

Jason Thompson, PF/C, Sacramento Kings: In mid-February, Thompson was the highlighted player in The Wire Troll and he earned it with improved FT shooting that month. although his bucket count dipped in March. Well, he’s back in a big way, recording two straight double-doubles with 1.5 blocks per game as his PT starts to bounce back after a bit of a lull. On Thursday, Thompson started over DeMarcus Cousins (who was benched for disciplinary reasons) and he really took advantage with 16 points and 16 rebounds. Expect Thompson’s PT to be inconsistent, which makes it tough to roll with him, but man, if you can catch an effort like that, how sweet is that?

Jermaine O’Neal, Phoenix Suns: Coincidentally, O’Neal was last featured in the same column that Thompson headlined, and he’s also earned it, sinking way more buckets in February and then getting his most touches of the season in March. It’s a lost season in Phoenix, but with Marcin Gortat done for the season, JO is one of the few true post options the Suns have. O’Neal is still coming off the bench, but is likely to regain the starting gig before the end of the season. Either way, with three straight games of at least 13 points, five boards and a block, he’s worth a look. O’Neal has become a leader on a fairly young team in Phoenix and if he’s getting 23-to-25 minutes, he can help you.

Meyers Leonard, Portland Trail Blazers: This lottery pick is starting to prove he is the future in Portland, getting to start four of the past five games and flashing scoring and rebounding talent.

Tyler Zeller, Cleveland Cavaliers: Zeller’s been inconsistent, but has averaged nearly a dozen points per game over the last three. Perhaps becoming an uncle will inspire him. Why? Well, why the hell not?

By RotoRob
This entry was posted on Saturday, April 6th, 2013 at 4:00 pm and is filed under BASKETBALL, RotoRob, The Wire Troll. You can follow any responses to this entry through the RSS 2.0 feed. Both comments and pings are currently closed.