The Wire Troll: E’Twaun Moore Making his Mark for Magic 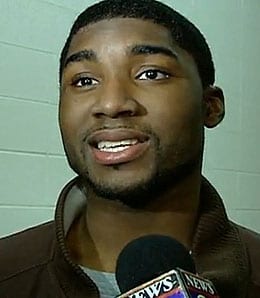 E’Twaun Moore has emerged from obscurity in Orlando.

Welcome back to another week of the NBA Wire Troll. The season’s first complete week included much drama: Off to a slow start, the Lakers wasted no time in panicking and firing coach Mike Brown; on the other side of the country, the Knicks are off to their best start in nearly 20 years; and in South Beach, LeBron James is day-to-day after hurting his right knee Friday night.

Let’s get to our picks of the week, shall we?

E’Twaun Moore, PG/SG, Orlando Magic: Talk about a dude coming out of nowhere. When Jameer Nelson got hurt it was Moore that stepped in to a starting role for the Magic and he’s quickly established himself as a must-grab player in the interim. It certainly helps that Hedo Turkoglu is also out as Moore is getting major burn in the backcourt, playing a season high 40 minutes Friday while nailing four treys en route to a team-high 18 points and five dimes. Moore has reached double digits in all five games, building on a nice preseason with way more buckets than anyone could have reasonably expected. Nelson (groin/hamstring) is very close to returning, but Moore should retain value for now thanks to the other backcourt injuries for the Magic.

Danny Green, SG, San Antonio Spurs: Heading into the season, we ranked Green as a top 35 two-guard. Of course, that was before we knew he’d emerge as the starter in San Antonio, allowing him to post top 15 value at the position and making him a nice wire pickup. Green’s PT is trending downward, and that’s a concern, but he’s getting more touches than ever, is shooting 50 per cent from downtown, has been perfect from the line and is pitching in with scoring and steals. This dude has potential as someone who can help you in treys, steals and blocks – and that is a rare mix of category help. Yes, Green stunk it up Friday, but some foul trouble might have been the issue. Give him a mulligan and take the risk that he’s going to start producing bigger numbers.

Luke Ridnour, PG, Minnesota Timberwolves: Ridnour’s been a tad inconsistent, but with Ricky Rubio and now J.J. Barea out, he’s worth picking up.

Shannon Brown, SG, Phoenix Suns: Brown blew up in the fourth quarter Friday, scoring 12 of his 22 points, to lead the Suns to a big comeback. That should earn him more burn.

Trevor Booker, PF, Washington Wizards: In mid-March, Booker had a coming out party, and now he’s getting a chance to start while Nene deals with a foot woe. Booker’s been inconsistent early, but Friday he shot very well and wound up with 11 points and two steals. He’s struggled with his shooting touch early on, so Friday’s performance was a step in the right direction. Just note that Kevin Seraphin provides a threat to Booker off the bench, but Booker came out on the top end of this position battle Friday.

Taj Gibson, PF, Chicago Bulls: In late-February, Gibson made our Wire Troll column with the caveat that he doesn’t get quite enough PT to be a standard format option, but considering what he did in March it was a great call. Well, he’s again popping up on the radar coming off a season-high 25 minutes of action Thursday. No, he didn’t have a good game, but had scored in double digits in the previous two while pitching in with some boards and getting plenty of blocks. If Gibson ever got another shot to start, he’d really explode, and with the injury prone Joakim Noah and Carlos Boozer in front of him, that chance will come.

Patrick Patterson, PF/C, Houston Rockets: Patterson is getting enough PT and producing enough to be worth a look in standard formats. He’s not a game changer, but a decent low-end option (with upside) if you need help.

Samardo Samuels, PF, Cleveland Cavaliers: Samuels was the first frontcourt player off the bench Friday and he’ll put up some points when he gets the chance, so put him on your radar in standard formats and give him a look in very deep leagues.

Larry Sanders, C/PF, Milwaukee Bucks: In late-February, we recommended Sanders as a deep league option. Okay, so he didn’t see much burn in March, but in April he really started flashing his ability. Sanders has always put up nice numbers in limited PT, which always made Fantasy owners curious what he could do in a bigger role. Well, we’re getting to see that now, and the results are sweet as he’s scored in double digits in every game, is throwing a nightly block party, flirting with or achieving double digit boards and canning shots at an uncanny rate. Sanders is also getting to the line more often and actually sinking his shots there – a real improvement from his first two campaigns. Samuel Dalembert is currently the starting centre in Milwaukee in name only; it is Sanders who is the player you want on your Fantasy team.

Nikola Vucevic, C/PF, Orlando Magic: Vucevic snuck into our Top 40 centre rankings this preseason, and so far he’s looked like a top 30 player at the position. As Dwight Howard’s replacement as the starting centre in the Magic Kingdom, he’s getting plenty of burn on a shallow Magic squad (nearly 29 MPG), and is doing enough to justify a roster spot in most formats. Vucevic had two double-doubles in the first three games and has reached double digits in scoring three times through five games. There’s no doubt he needs to assert himself more defensively, but the fact that he’s producing makes him worth considering.

Kosta Koufos, C/PF, Denver Nuggets: Koufos had a breakout game Friday with 15 points, 10 boards, three blocks and two steals in 25 minutes. Grab him now in 14-team leagues, and give him a look in smaller formats.

Jason Thompson, PF/C, Sacramento Kings: Thompson got major burn Friday and has suddenly averaged 15 points per game in the past two. He’s starting at PF for the Kings, but also qualifies at centre in Yahoo! leagues.

By RotoRob
This entry was posted on Saturday, November 10th, 2012 at 10:57 am and is filed under BASKETBALL, RotoRob, The Wire Troll. You can follow any responses to this entry through the RSS 2.0 feed. Both comments and pings are currently closed.