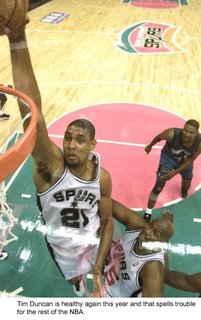 Is it me? Did I do something wrong? I still haven’t seen a Raptor victory this season after yesterday’s nine-point loss to the Spurs.

Not surprisingly, against a dominant defensive San Antonio team, the club was not able to score at will as it did against Milwaukee on Friday night (a game which I missed in its entirety, by the way, not that I’m bitter or anything).

The Spurs remain one foe that Toronto consistently struggles against. The Raps have now dropped eight of their last nine against the perennial contenders.

With Tim Duncan 100 per cent healthy after struggling through the worst season of his career last year thanks to plantar fasciitis, San Antonio has to again be considered a top threat to win another championship. And you can bet the Spurs arrived in Toronto in a foul mood, after losing to the Cavs at home Friday night for the first time since 1988.

Duncan did his thing yesterday, completely taking over the game in the third quarter with 13 of his 26 points. He only played 29 minutes, but was amazingly efficient, sinking 10-for-15 from the floor and an uncharacteristically good 6-for-7 from the line (after missing 10-of-19 on Friday). It’s obvious how much better he’s feeling this year. Those quick spin moves in the low post were far too rare last season. Once that patented bank shot starts coming more frequently, look out. Duncan will justify his late-first round, early-second round selection status. Don’t worry.

The Spurs got capable secondary scoring from Tony Parker, despite the fact he’s still not at full strength after suffering an ankle sprain last week. Parker was also efficient, scoring 19 points (10 in the fourth quarter) on 8-for-15 shooting from the floor and 3-for-4 from the line. He also added four boards. There’s little chance Parker can duplicate last season’s ridiculously good 54.8 per cent mark from the field. That’s unheard of for a guard. But the early returns suggest that Parker is capable of averaging 20 PPG for the first time this season and he should get even better whenever Eva finishes nursing him back to full strength. As you can well imagine, it’s hard to be Tony Parker these days.

Observations from the game:

I’m off to a very good start in the expert fantasy basketball league, ranking second of 12 teams after the first week. I made one switch this week, dumping Bobcat centre Primoz Brezec, who’s going to be out for two weeks because of exhaustion (jeez, the preseason sure is tough, eh?) and may not get his job back upon return. In his place, I’ve added Golden State’s Andris Biedrins. Biedrins has taken over at centre and recorded a double-double in his first game. I’m praying he keeps it up with the Warriors playing four games this week. At the very least, he should help my FG percentage, which is abysmal to start.

By RotoRob
This entry was posted on Monday, November 6th, 2006 at 9:07 am and is filed under BASKETBALL, Courtside, RotoRob. You can follow any responses to this entry through the RSS 2.0 feed. You can skip to the end and leave a response. Pinging is currently not allowed.