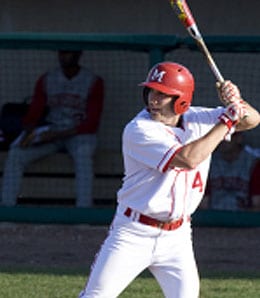 Adam Eaton has a chance to go as high as the fourth round in the upcoming MLB Draft.

No, not that Adam Eaton. This Adam Eaton is a hitter with Miami (Ohio) University, and based on the season he’s having, he could go as high as the fourth round in the MLB First-Year Player Draft, scheduled for June 7-9.

He’s enjoying an excellent junior season, leading the team in hits, runs, doubles, triples, homers and steals, prompting a shift from the lead-off spot to the three hole.

A native of Springfield, Ohio, Eaton is a product of Kenton Ridge High School, the same institution that churned out former major leaguer hurlers Dave Burba, Dustin Hermanson and Rick White. Eaton has a chance to be the first graduate of Kenton to become a major league position player.

Of course, he’s got a long road ahead of him before we start talking about a potential big league career.

Eaton obviously has some serious speed, as he’s among the nation’s leaders in triples and needs just one more three-bagger to become Miami’s all-time leader. He’s currently tied with Chris Sexton, a middle infielder who went on to play 70 games in the majors. Eaton also ranks in the top 10 in school history in stolen bases and runs.

Of course, breaking records is nothing new to Eaton. At Kenton Ridge, he set new school standards for hits and runs in a season.

And the outfielder is obviously a highly-regarded prospect as last summer he was scheduled to play in the Cape Cod League, a place reserved for only top college ball prospects. Unfortunately, an injury wiped out that plan.

The 21-year-old Eaton is slight at 5’9”, 163, but he packs some punch in his small frame judging by his extra-base output, especially in the last two years.

One of the top players in the Mid-American Conference, Eaton was a first team All-Conference and second team All-Mideast Region player in 2009. As a freshman in 2008, he was a starter in all but one of his 50 games, pretty impressive for a first-year player.

Eaton is also durable, missing just two games last year, batting .350, good for fourth on the team. He paced Miami with 67 runs, fifth best in the MAC and the fourth-highest single season total in school history.

This season, Eaton has been virtually untouchable on the basepaths, having stolen 20 bases in 21 tries, one of the best stolen base success rates in the entire country. Of course, that’s pretty much par for the course for him; as a soph in 2008, he was 28-for-29 in steals.

The kid is not slowing down, either. On Sunday, he was 4-for-6, just a triple short of the cycle, to lead Miami to a weekend sweep over Akron, helping the team get back to .500 overall and just one game under .500 in division play.

Given his size, it’s tough to see Eaton’s college power translating into major league pop, but the speed is for real. Combined with his excellent batting eye, Eaton could be a future top-of-the-order hitter in the majors, depending on his situation.

By RotoRob
This entry was posted on Wednesday, April 28th, 2010 at 2:05 pm and is filed under BASEBALL, College sports, Draft report, Prospects, RotoRob. You can follow any responses to this entry through the RSS 2.0 feed. Both comments and pings are currently closed.