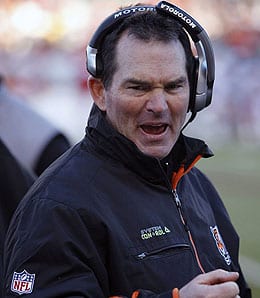 Just for shits and giggles, we’re going to try something new today. I’m going to scour through some of the nearly 2,600 people I follow on Twitter and see who is saying something interesting that’s ideally sports related.

Tweet: “I think Zimmer would be a tremendous hire for the Browns”

Our take: A writer for CityBeat Cincinnati, ctrent weighs in on Cleveland’s latest candidate for its head coaching vacancy, Mike Zimmer. The Bengals’ defensive coordinator interviewed for head coaching gigs in Miami and Tampa Bay last year and he’s considered one of the top assistants on the market.

Tweet: “David Price will grace cover of MLB2K13, but Bryce Harper is still up for MLB ’13 The Show cover. To vote for him, use hashtag MLB13Harper”

Our take: This is the account of Dan Kolko, the Washington Nationals beat writer for MASNsports.com. I’m not sure he should be pushing for Harper to be a cover boy. Doesn’t he know about the cover jinx? Okay, in fairness, that hasn’t always been the case a la Madden in football. But last year, Adrian Gonzalez was on the cover of the U.S. version and Jose Bautista graced the front of the Canadian release. How’d that work out, guys?

Tweet: “I think we need the daily reminder that @unclejeffgreen was on that hospital bed a year ago. Amazing”

Our take: This is the account of John Karalis, one of the dudes behind RedsArmy.com, a Celtics site. He is referring to the fact that Jeff Green was undergoing a heart procedure a year ago, an ailment that cost him the entire season. And while he’s got a much less prominent role, merely coming off the bench this season, that he’s back in the NBA at all is a miracle.

Our take: This is the account of former NHLer and current Sportsnet analyst Nick Kypreos. Here he is tweeting one of the top hockey stories of the day, namely that Toronto Maple Leafs GM Brian Burke has been fired. Like everyone else, this one surprised us given the timing. Why wasn’t he canned after the season? What happened between now and then? Did this have something to do with the long-rumored trade that would Roberto Luongo to Toronto?

Tweet: “Some writers say they can’t imagine the Hall of Fame going forward without Bonds or Clemens. Why not? They’ve had one without Pete Rose.”

Our take: This is the account of David O’Brien, a baseball writer for the Atlanta Journal-Constitution. I have to agree with him. If the Hall of Fame is already missing the all-time hits leader (Rose), one of the greatest hitters of all time (Joe Jackson), and the former single season home run record holder (Mark McGwire), then how big a stretch is it to see the all-time home run leader (Barry Bonds) and the man that has won more Cy Young Awards than anyone (Roger Clemens) shut out of the hallowed halls as well?

By RotoRob
This entry was posted on Wednesday, January 9th, 2013 at 2:41 pm and is filed under BASEBALL, BASKETBALL, FOOTBALL, HOCKEY, RotoRob, Twitter Trending. You can follow any responses to this entry through the RSS 2.0 feed. Both comments and pings are currently closed.