The Wire Troll: Talk to Chuck 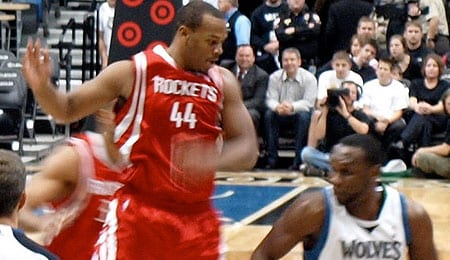 Chuck Hayes (left) is getting it done as the Rockets’ centre.

Buck is jammed this week, so The Wire Troll again falls to your trusty editor, RotoRob. We’ll keep it clean this week, and get right to the good stuff. For updates during the week, follow the Troll on Twitter.

Chuck Hayes (PF/C), Houston Rockets: With Yao Ming (shockingly) done for the year and Brad Miller still ailing, Hayes has been getting it done in the middle for Houston. In five games since returning from a sprained ankle, the undersized Rocket centre has averaged 9.0 PPG, 8.2 RPG, 3.2 APG, 1.2 BPG and 1.2 SPG in 31.2 MPG while canning a ridiculous 61.8 per cent of his shots from the field. Okay, so Hayes has limited upside, but he’s been lauded for his stellar defensive play, so he will likely keep this job and continue to provide low-level Fantasy value for the remainder of the season.

Kwame Brown, Charlotte Bobcats: Brown has been starting and producing lately, and an injury to Tyrus Thomas should ensure he continues to see plenty of minutes. Earlier this week, Brown put up back-to-back double-doubles before seeing less action in the past two games. Still, surely his averages over the past five games can help some teams: 9.4 points, 10 boards and a 58.1 shooting percentage from the field. You’ll need to look elsewhere for blocks and steals, but Brown has double-double potential and is almost certainly sitting on your wire.

Corey Brewer (SG/SF), Minnesota Timberwolves: The former Gator was a full-time starter for the T-Wolves last season, but has spent most of this season coming off the bench. However, Brewer has recently been promoted to the starting lineup and he’s responded with five straight games in double-digit scoring, averaging 13.2 points in 29.6 minutes per game. But Brewer’s true value lies in his thefts – he’s averaging three steals per game in the past five and is tied for eighth in the association despite being a reserve until recently. Playing starter minutes, Brewer can easily pace the NBA in steals, so if that’s an area of need for you, he’s your man and is almost certainly available in your league, being currently owned in just a fifth of Yahoo! leagues.

Amir Johnson, Toronto Raptors: Johnson has been shuffled in and out of the starting lineup lately, but his upside is too massive to ignore – and given that he’s only owned in 54 per cent of Yahoo! leagues, there’s a decent chance he’s on your wire. Okay, so Friday he didn’t see much action, but he still scored 11 points and we’re willing to ignore that line considering the Raps were disintegrated by 40 points. Foul trouble continues to be Johnson’s Achilles’ heel, so you need to steel yourself for the occasional clunker, but Johnson’s double-double potential (11.2 points and 8.2 boards per game over the past five) and ability to help you in blocks and steals cannot be ignored, so if his owner got frustrated and dumped him, go ahead and take the plunge.

Corey Maggette, Milwaukee Bucks: OMG…Mr. Maggette is suddenly relevant again. The struggling Bucks – desperate for a spark with Brandon Jennings still out – have plugged Maggette into the starting lineup and he’s delivered, scoring at least 20 points in three straight games. And the fact that Milwaukee has started to turn things around with two straight wins suggests that he could very well keep this job. Maggette has been one of the week’s most popular pickups, so you better move fast to see if he’s still sitting on your league’s wire.

Ramon Sessions, Cleveland Cavaliers: Mo Williams – as well as pretty much half the Cavs’ squad – is ailing now, allowing Sessions to move into the starting lineup. On Friday, he tied his season high with 22 points, and is now averaging 17.4 points, 6.2 assists, 3.2 rebounds and 1.4 steals per game in the past five contests. Williams is expected to be out a couple of weeks at least, making Sessions an excellent play for the short term.

Gary Neal, San Antonio Spurs: Need treys? Neal has been an excellent source of them off the Spurs’ bench, draining at least one in every game since December 28 and at least two in each of his past three games. The rookie’s PT keeps rising and he’s really starting to make a name for himself. And with just a 6 per cent ownership level in Yahoo! leagues, he is very readily available for those that need a boost of threes.

By RotoRob
This entry was posted on Saturday, January 22nd, 2011 at 4:56 pm and is filed under BASKETBALL, RotoRob, The Wire Troll. You can follow any responses to this entry through the RSS 2.0 feed. You can skip to the end and leave a response. Pinging is currently not allowed.