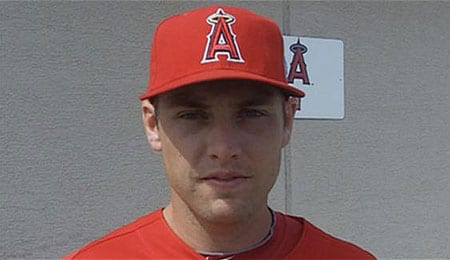 Peter Bourjos could benefit from the departure of Kendrys Morales.

The 2013 RotoRob MLB Draft Kit continues today with a look at some deep sleepers! Everyone loves sleepers, right?

Spring Training seems like an eternity away, but believe me, it will be upon us quicker than someone can schedule hip surgery. It’s time to give some of my early favourite Fantasy sleepers the proverbial once over. I tend to look a bit deeper and off the radar than most and this list tends to lean very heavily on the speculation side of things, but you can bet your sweet bippy that some of the players listed below will be difference makers in 2013.

Peter Bourjos, OF, Los Angeles Angels: The Angels finally created some breathing room on their roster by dealing Kendrys Morales to Seattle and either Vernon Wells or Peter Bourjos is going to be the beneficiary. I’m betting on Bourjos. There is no doubting that 2012 was an unmitigated disaster, but he simply has too many skills to fall off the map that quickly and decidedly. If you can grab him in the latter rounds and he can bounce back to his 2011 level of play, what a nice bonus you’ll get.

Rubby De La Rosa, SP, Boston Red Sox: De La Rosa was part of the haul the Red Sox received in their huge cash purge last summer. Still only 24, he will be looking to rebound from a 2012 lost to Tommy John surgery. De La Rosa should be ready to roll come Spring Training and if he can show any semblance of the potential we saw in his July 2011 numbers with the Dodgers, it will go a long way towards stabilizing a suspect BoSox rotation.

Adam Eaton, OF, Arizona Diamondbacks: Eaton has absolutely nothing left to prove at Triple-A after his amazing 2012. Now would someone please advise Arizona GM Kevin Towers of this before he signs another outfielder? In 488 at-bats at Triple-A Reno, Eaton hit seven homers with 45 RBI and 119 runs scored. Did I mention the .456 OBP and .381 BA? If that isn’t enough to warrant your attention let’s not forget the 38 stolen bases. He acquitted himself well in a late-season call-up and both the centrefield and leadoff gig should be Eaton’s to lose this year. What is Arizona’s other option, Cody Ross?

Jedd Gyorko, 2B/3B, San Diego Padres: Gyorko has been moved from the hot corner to second base and all indications are that the Padres will give him the opportunity to win the gig at the keystone corner this spring. When you mash 30 homers with 100 RBI at two levels and don’t skip a beat with the promotion to Triple-A (as Gyorko did last year), you should be getting a shot at winning regular playing time.

Aaron Hicks, OF, Minnesota Twins: In the span of two weeks this offseason the Twins traded both Denard Span and Ben Revere. Who is going to be batting leadoff this year in the Twin Cities? Darin Mastroianni is probably the short-term answer to that question but don’t rule out Hicks from working his way into the mix. Hicks, a toolsy 23-year-old, managed to slug 13 homers with 61 RBI, 100 runs, and 32 thefts at Double-A New Britain last year. That almost sounds like it could fill the bill, doesn’t it?

Leonys Martin, OF, Texas Rangers: I don’t know if anyone has noticed, but the Rangers don’t currently have a surplus of proven talent in the outfield heading into the 2013 season (unless, of course, you believe that they’ll wheel Craig Gentry out on a day-to-day basis). Martin struggled last year at the big league level but at Triple-A Round Rock he posted some off-the-charts numbers. There’s still a lot of time left for the Rangers to make a move to fill their outfield void but keeping an eye on Martin could prove to be a rewarding move.

Hiroyuki Nakajima, SS, Oakland Athletics: Nakajima started his serious prep for the bigs by spending quality time with former Royal Dee Brown. Nakajima also possesses an MLB ready bat flip and has been known to turn on a fastball. Toss in his self-confessed man crush on Billy Beane and he won’t have any problems adapting to his new team in Oakland. Nakajima is currently going after Jemile Weeks, Yunel Escobar, Andrelton Simmons, Omar Infante and Billy Hamilton in early mock drafts. That’s not a whole lot of love for a player that has averaged both double-digit home runs and stolen bases in a lengthy career in Japan.

Bruce Rondon, RP, Detroit Tigers: The Tigers’ closer-of-the-future might find that the future could arrive as early as this spring. The 21-year-old righty had an amazing journey through the minors last year moving from Class-A to Triple-A and he didn’t skip a beat along the way. Installing such a raw arm at closer seems like a rather gutsy call for a team looking to get back to the World Series but unless the Tigers have a change of heart and make a move for an established closer — which currently seems unlikely — Rondon has to be the early favourite for saves in Tigertown in 2013.

Trevor Rosenthal, SP/RP, St. Louis Cardinals: Rosenthal, 22, acquitted himself very well last fall in his first go-round in the Cards bullpen. He’s a starter by trade and will probably move into that role eventually, but his strikeout per inning potential can’t be ignored in a setup role for closer Jason Motte.

Hector Santiago, RP/SP, Chicago White Sox: Last year was an up, down, and all over the place season for the 25-year-old southpaw. He broke camp as the closer, struggled, was replaced by Addison Reed, toiled in middle-relief and then was shifted into the rotation and opened some eyes with a seven-inning, one-hit, 10-strikeout gem to wrap up the campaign. Chicago’s rotation is far from carved in stone and although Santiago is a definite long shot, you have to be intrigued by his high strikeout rates.

Scott Sizemore, 2B, Oakland Athletics: Let’s not forget about Sizemore when making our plans for 2013. The injury that destroyed his 2012 campaign should be water under the bridge and with his move back to the middle infield, he’ll be competing with the underwhelming Jemile Weeks for the gig at second. Sizemore slugged 11 homers with 56 RBI in 368 at-bats in a solid 2011 campaign, so you know he’s capable of producing when healthy.

Junichi Tazawa, RP, Boston Red Sox: I’m way beyond puzzled at the series of moves recently made in Beantown. Have the Sox somehow forgot that Tazawa was their best arm out of the pen in 2012? Maybe he’s simply not part of the plan but given that he put up a 1.43 ERA and 0.95 WHIP and only five free passes in 44 IP in 2012, you have to wonder what Boston has up its sleeve. Is a return to the rotation for Tazawa a possibility? Those 2012 numbers are simply too good to ignore.

Tsuyoshi Wada, SP, Baltimore Orioles: Wada’s first season in Baltimore was down the drain before it even got rolling, concluding with a visit to Dr. Yocum. Wada is ahead of schedule in his rehab from the Tommy John surgery and should be ready to roll early in the 2013 campaign. File this one under the long shot category, but the fact that the O’s invested in Wada after his solid career in Japan is good enough for me to be monitoring his progress heading into Spring Training. (Okay, truth be told, I monitor anyone that played ball in Japan — but don’t worry, I’m in therapy for my obsession and have recently redone my bedroom from its former Hello Kitty motif.)

By Tim McLeod
This entry was posted on Monday, January 7th, 2013 at 1:00 pm and is filed under 2013 RotoRob MLB Draft Kit, BASEBALL, Sleepers, Tim McLeod. You can follow any responses to this entry through the RSS 2.0 feed. Both comments and pings are currently closed.