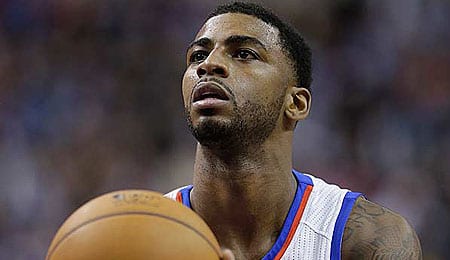 Dorell Wright has taken advantage of his chance to start for the Sixers.

Can anyone stop the Los Angeles Clippers? Chris Paul was the man Friday, scoring 29 points – including the last seven – to lead Lob City from 19 points back of the Jazz to a 16th straight win. Woah. It’s the longest winning streak in the NBA in over four years and it’s becoming clear that the Clippers’ inability to win in Utah is a thing of the past.

We’ve got a coaching change this week with Avery Johnson axed in Brooklyn and P.J. Carlesimo taking over as interim coach. Keep an eye on rotations and lineups to see if he plans changes (although he says major changes will have to wait with the team in a tough stretch right now). But sharp owners will watch this situation and try to take advantage of trends.

With Christmas now in the rear view mirror, we are well into the Fantasy basketball season. By now, you should have identified your strengths and weaknesses and taken steps to address those deficiencies, either through trades or the wire. The latter is where we aim to help and the key thing to track at this time of year is the injury list, because that is where you stand to gain the most by uncovering players who will benefit from a teammate’s health woes, even if it’s just on a short-term basis.

With this in mind, let’s get to this week’s recommendations…

Dorell Wright, SG/SF, Philadelphia 76ers: Way back in our season debut of The Wire Troll, we recommended Wright as a nice option off the Sixer bench. Well, he struggled with his shot last month, likely finding his way back onto the wire. However, it’s time to give Wright another look because he’s getting a chance to start with J-Rich (back) out. Wright went off for his best game of the season Wednesday (28 points, five treys, six boards, two blocks and a steal), and while he cooled Friday (3-for-9), he still managed to haul in five boards, block three shots and get another steal – despite the fact that he had his shoe tossed into the crowd by Jarrett Jack at one point. Wright is getting to the line more lately and he’s also proved pretty durable the past few seasons.

Sebastian Telfair, PG, Phoenix Suns: It’s been over two years since Telfair last was someone we recommended, but with Goran Dragic (hip) out, he finds himself starting in Phoenix. This is just a plug-‘n-play recommendation as Dragic may only miss one more game, but in 41 minutes Friday, Telfair scored 19 points with six assists, one trey and one steal. He’s been making more FTs this season and that’s helped his scoring bounce back somewhat, but now that the minutes are coming this week, he’s been putting up some numbers. Unfortunately, it hasn’t been enough to turn around the Suns (four straight losses), so you can bet that Telfair will be pretty much useless again in a game or two.

Pablo Prigioni, PG, New York Knicks: With Raymond Felton (finger) out 4-to-6 weeks, Prigioni is expected to get enough burn to be useful and he dropped nine dimes on Friday, giving us a hint at what he’s capable of.

Kirk Hinrich, SG, Chicago Bulls: HInrich has been averaging a bit more PT lately, but he should be well rested for Saturday’s game after the snow-out Wednesday. This is a deeper league option only, but we’re expecting him to have a big game Saturday against the Wizards.

Chris Copeland, SF, New York Knicks: The Knicks’ rookie out of Colorado is getting some burn off the bench with Carmelo Anthony (knee) out. Bear in mind that ‘Melo will be back soon, but Copeland is really taking advantage of his first opportunity at serious minutes. He played 30 minutes Wednesday, responding with 14 points, two treys, two blocks and two boards despite some foul trouble. Friday, Copeland stayed out of foul trouble and played 41 minutes, going off for 23 points, three treys, a board, an assist and a steal. Given the minutes, this dude can score, so perhaps this run will earn him more rotation time going forward.

Mike Miller, SF, Miami Heat: Miller got the start Friday with Dwyane Wade suspended for one game and he responded with a modest five points, four boards and a trey. At this point in his career, Miller is only useful for three-point help in very deep leagues. He’s dealt with health woes and personal issues, but hey, this is a dude with his own freaking tourney. Miller has managed to stay healthy so far this season, but then again, he’s barely seen much action, so the 23 minutes he logged Friday jumped out.

Martell Webster, SF, Washington Wizards: Webster has been starting for the injury-ravaged Wizards and recorded a double-double Wednesday before cooling Friday.

Jeff Green, SF/PF, Boston Celtics: Green’s been inconsistent all season, but showed signs of life lately and has been lights out from the line.

Tyler Zeller, Cleveland Cavaliers: We recommended Zeller a few weeks ago when he started looking healthy, but now that Anderson Varejao is out, the rook is getting a chance to start. This is a short-term addition because Sideshow Bob’s knee woe is not serious, but Zeller is getting it done for now, scoring 12 points with seven boards, a block, an assist and a steal in his fifth start of the season on Friday.

Patrick Patterson, C/PF, Houston Rockets: Several weeks back we recommended Patterson and the third year man did not disappoint, shooting extremely well in November before hurting his foot a couple of weeks ago. Well, he’s about to return (Saturday or Monday) and given how much PT Patterson was seeing before the injury, he needs to be picked up. Do it now, because he won’t last on the wire.

Boris Diaw, San Antonio Spurs: Every now and then this guy has one of those five-cat games, but he’ll generally put up low-end numbers when he gets the minutes. Because Diaw hasn’t had much PT lately, he’s a deep league special only, but you never know when he’ll get another chance to start.

Emeka Okafor, Washington Wizards: So far, Okafor’s biggest Fantasy impact this season came when he knocked Glen Davis out, but don’t overlook him — he has three straight double-digit rebounding games and has been throwing an ongoing block party.

By RotoRob
This entry was posted on Saturday, December 29th, 2012 at 12:19 pm and is filed under BASKETBALL, RotoRob, The Wire Troll. You can follow any responses to this entry through the RSS 2.0 feed. Both comments and pings are currently closed.