NBA Today: Is Mike Brown the Right Fit for the Lakers? 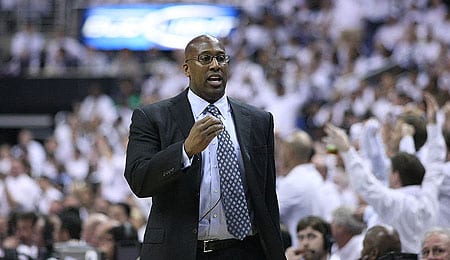 It will be interesting to see how new Laker coach Mike Brown’s relationship with Kobe Bryant evolves.

It’s been a while since we talked some hoops and with the little break we’ve got between the Conference Finals and NBA Finals, now’s a perfect time to catch up on some news.

The biggest recent tidbit is that former Cavalier coach Mike Brown has been named the new coach of the Los Angeles Lakers, succeeding Phil Jackson. Kobe Bryant, who endorsed assistant Brian Shaw as Jackson’s replacement, apparently said that it was up to management to choose the next coach, but now Laker executive Jim Buss said he regrets not talking to Kobe about choosing Brown.

“Looking back on it, we should have contacted Kobe,” Buss admitted to the Los Angeles Times. “Kobe said it was management’s job to pick a coach. He just said, ‘Defense first.’ That’s what we were doing, but we should have reached out to him.”

Bryant expressed surprise at the news, but mainly because he didn’t know the Lakers were even looking at Brown.

For his part, Brown has some pretty damn big shoes to fill. He also inherits a team that could very well be at a crossroads after their disappointing playoff run this season. Is just a little bit of tinkering needed to get this team back into contention or will the changes be more substantial? That’s not necessarily Brown’s call to make at this stage, but handling a team with as many egos as this one won’t be easy. Yes, he’s coached LeBron James, but Brown has never had to deal with as many stars as the Lakers boast and he’s never had to deal with an aging superstar like Bryant. How will he handle limiting the minutes for Bryant, who turns 33 this summer?

Speaking of Brown’s former team the Cavs, who own the top pick in next month’s NBA draft, they are talking to the T-Wolves and Pistons about a three-team deal that would bag them the No. 2 pick as well. Cleveland is already expected to grab Duke PG Kyrie Irving first overall, but it also wants Arizona forward Derrick Williams with the second overall pick.

Talk about a quick rebuilding; a coup like that would go a long way towards laying the foundation for the Cavs to return to prominence very soon.

Here’s how the deal would go down: the Cavs would acquire Richard Hamilton (using their $14.6 million trade exception acquired from Miami in the LeBron sign-and-trade last summer) and the No. 8 overall pick from Detroit. Cleveland would flip that pick plus the No. 4 overall pick to Minny for No. 2.

The Cavs would then buy out Rip, who would then be free to sign with the Bulls, who have needed a shooting guard for quite some time, or whoever wants him.

The stumbling block: Detroit wants something back.

This isn’t the first time the Cavs have been linked to trading for Hamilton with an eye towards buying him out.

As for the Pistons, rumours persist that they are about to tie the can to Coach John Kuester, who has consistently clashed with his players in his two seasons at the helm. The most shocking aspect of this news is that it hasn’t happened already. Kuester’s tenure with Detroit has been simply disastrous.

Dallas guard Jason Terry, who got the Larry O’Brien trophy tattooed on his right biceps in October, now says that he’ll have it removed if Dallas fails to beat the Heat in the NBA Finals. He says if the Mavs lose, it means the tat is bad luck. Um, okay. Why didn’t he think of that when he first got inked up?

Last week, Scottie Pippen created quite an uproar when he said that LeBron James could surpass Michael Jordan as the greatest NBA player ever. King James has now weighed in on Pippen’s comments, saying “I’m not better than Jordan.” What do you guys think? Is James even in the conversation? Personally, I believe it’s a somewhat valid argument, but many point to the rings as the bottom line. Until James bags at least one championship, it’s a moot point. There is some merit in that line of thinking, but in examining them strictly from a talent standpoint, the gulf isn’t as wide as most would suspect. Rarely have we ever seen a player with as unbelievably a well-rounded game as LeBron has, and you can argue that he continues to get better. I have my doubts about him ever averaging a triple double for a season, but he’s definitely a threat to record one virtually every time he takes the court and that puts him in very exclusive company.

There was great news this weekend about the condition of Miami guard Mike Miller’s newborn child. He and his wife were able to bring their daughter home after she had spent time in pediatric intensive care because of holes in her heart. Miller says the baby is doing much better now, and that’s got to be a bit of a load off his mind as he’s about to compete in his first NBA Finals. Still, his daughter has plenty of doctor visits in her immediate future and that will obviously weigh on him. Miller hasn’t been much of a factor in Miami’s offense this postseason, but he did play a much larger role in the last two games against the Bulls, hoisting a combined 15 shots after taking a total of just four attempts in the first three games.

By RotoRob
This entry was posted on Monday, May 30th, 2011 at 12:44 pm and is filed under BASKETBALL, NBA Today, RotoRob. You can follow any responses to this entry through the RSS 2.0 feed. You can skip to the end and leave a response. Pinging is currently not allowed.